Dortmund under pressure as it gears up for rival Schalke 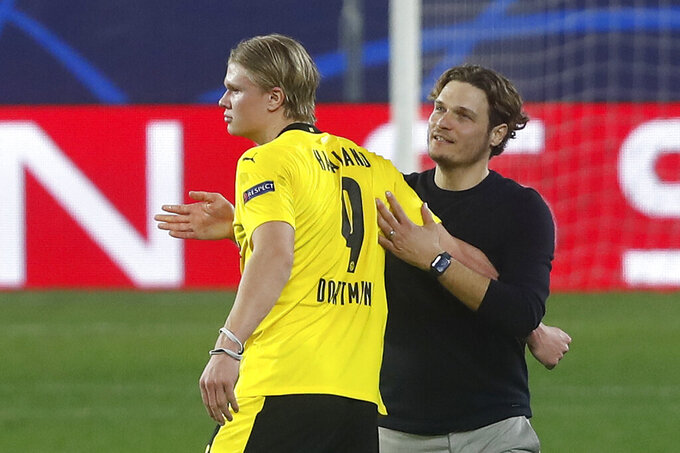 Erling Haaland’s two goals and Mohamed Dahoud’s long-range curler in the 3-2 win on Wednesday reminded everyone, not least the Dortmund players, that they can still be an exciting team capable of challenging Europe's best.

Now to do it in the Bundesliga.

Saturday brings the Ruhr Derby against Schalke. Once German soccer's must-watch rivalry, it threatens to be compelling for a different reason.

Dortmund is teetering on the brink of a crisis if it can't get back into the Champions League qualifying places while Schalke is facing relegation.

The Sevilla win was a valuable morale-booster since Dortmund has won just one of its last six in the league and was this week beaten to announcing its own coach.

When Borussia Mönchengladbach said Monday that Marco Rose would move to Dortmund in the summer, all Dortmund could do was issue a grudging confirmation of a deal it had hoped to keep quiet.

In a sign Dortmund was blindsided, there was none of the club-branded social media fanfare that accompanies a modern hiring.

It also left Edin Terzic a lame duck as interim coach in charge of a squad of young, hungry players who could push for transfers if they don't get Champions League games next season.

Even more than usual, Dortmund faces a fight to keep its squad together. The club's appeal to Europe's brightest teenage talents is simple — top-class training to unlock their potential, and Champions League games to showcase their skills to buyers.

It's the model that made stars of Ousmane Dembele and Christian Pulisic, and made money for Dortmund. With the club six points off the Champions League places, it could miss out on its European shop window next season for only the second time in the last 10 years and the first since 2015-16.

The title is long gone. Bayern Munich is 16 points ahead of sixth-place Dortmund as it prepares to play Eintracht Frankfurt on Saturday.

Jadon Sancho could easily have left last summer amid lengthy talks between Dortmund and Manchester United. A transfer at the end of this season looks far more likely, and would help the club make up for lost earnings because of the coronavirus pandemic. Others like Haaland or Gio Reyna will have more incentive to move on if they don't qualify for the Champions League.

“I love Champions League and when I saw (Paris Saint-Germain striker Kylian) Mbappe scored a hat-trick yesterday, I got free motivation,” Haaland said in televised comments Wednesday. Asked about calls from Real Madrid fans for the Spanish club to sign him, he added: “It's always nice when someone wants you.”

Dortmund's local rival Schalke offers a cautionary tale of what happens when an ambitious club starts missing out on European qualification.

A decade ago Dortmund and Schalke were teams with solid working-class roots building global brands, capable of challenging Bayern Munich. By its own admission, Schalke made over-ambitious bets on signings and wages in the hope Champions League money would cover them.

When performances in the Bundesliga dipped and new contenders such as Leipzig increased the competition for the coveted Champions League spots, Schalke's spending eventually pitched the club into a financial crisis made worse by the pandemic.

A surprise derby win over Dortmund looks like one of the only things which could spark Schalke into life to avoid relegation. It's nine points away from safety and the teams above it, Arminia Bielefeld and Mainz, have hit form in recent weeks.