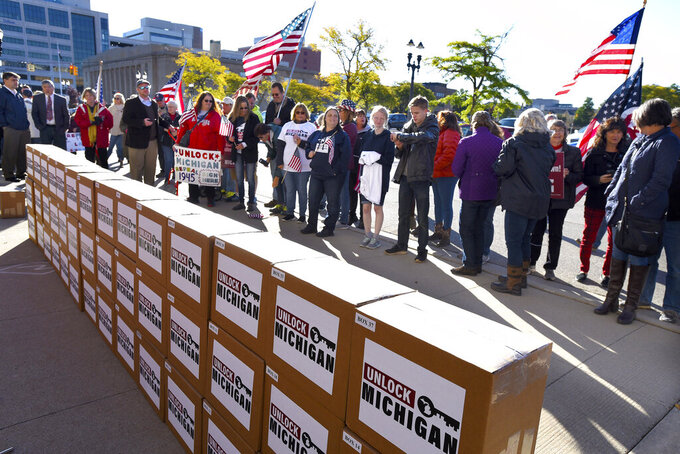 FILE - In this Oct. 2, 2020 file photo, a group gathers as boxes filled with petition signatures are delivered by Unlock Michigan to the Michigan Department of State Bureau of Elections in Lansing, Mich. A group trying to repeal an emergency powers law that Gov. Gretchen Whitmer used for months to issue coronavirus restrictions cleared a key hurdle Monday, April 19, 2021 when the Michigan elections bureau said it collected enough petitions. (Rod Sanford/Detroit News via AP)

Unlock Michigan, which has ties to Republicans, submitted an estimated 460,358 valid signatures, more than the roughly 340,000 needed, according to a staff report. If the bipartisan Board of State Canvassers agrees with the recommendation to certify the initiative at a Thursday meeting, the GOP-led Legislature will likely pass the measure rather than let it go to a public vote in 2022. The Democratic governor could not veto it.

The 1945 law underpinned Whitmer's far-reaching COVID-19 orders for nearly seven months. Republican lawmakers sued, and a divided Michigan Supreme Court declared it unconstitutional in October. But her opponents say the law should be permanently taken off the books because a future court could rule differently.

Democrats won control of the high court in the November election.

Since the court decision, the governor has turned to the state health department to keep intact a mask requirement and to tighten and ease capacity restrictions and gathering limits through a public health law whose origins date to the 1918 flu pandemic.

Michigan, which is facing a third surge of infections, on Monday reported a record number of hospitalized adults with confirmed COVID-19 cases. The seven-day rate remained highest in the U.S.

A separate emergency powers law, from 1976, remains in place. It lets a governor declare an emergency but, unlike with the 1945 law, it and related orders cannot go longer than 28 days without legislative approval.

Voter-initiated bills have been passed by legislators nine times since 1987, all when Republicans controlled the Legislature.

Unlock Michigan spent nearly $1.9 million to gather the signatures. Nearly $1.1 million came from Michigan Citizens for Fiscal Responsibility, a nonprofit that is linked to a political firm that works with the Senate GOP and does not have to publicly disclose its donors. Michigan! My Michigan!, which also is tied to the firm and Senate Majority Leader Mike Shirkey, gave $550,000.

Charlie Owens, Michigan director of the National Federation of Independent Business, said it is time to "drive a stake through the heart of this obsolete law.”

Keep Michigan Safe, a group opposing the ballot drive, challenged the signatures and separately sued last week in attempt to halt the canvassers' review of the petitions. It alleges that organizers engaged in illegal, unethical and unscrupulous behavior.

Spokesman Mark Fisk said the bureau's report "didn’t address 90% of our many procedural and substantive challenges. ... We’re disappointed but we will make our case to the Board of Canvassers and the courts to stop this ill-conceived and irresponsible petition drive.”

The state added more than 8,500 new coronavirus cases and 61 deaths within the previous 48-hour period, bringing the totals to about 16,900 deaths and 794,000 cases. The seven-day average of daily deaths has risen over the past two weeks from 30 to 53, according to Johns Hopkins University.