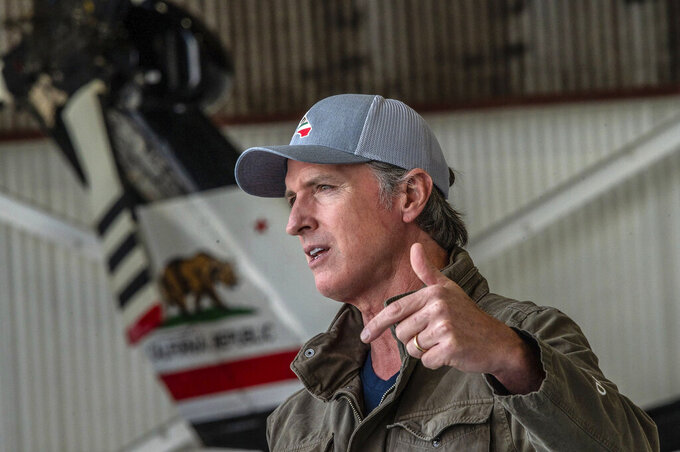 SACRAMENTO, Calif. (AP) — As California sinks deeper into drought it already has had more than 900 additional wildfires than at this point in 2020, which was a record-breaking year that saw more than 4% of the state’s land scorched by flames.

The danger prompted Gov. Gavin Newsom to propose spending a record $2 billion on wildfire mitigation. That’s double what he had proposed in January.

“Clearly we recognize we need to step up our efforts here in the state of California and that’s what we began to do early this year,” he said Monday.

California’s mountains and foothills are expected to see above-normal wildfire potential from June through August and possibly into the fall, which is the usual peak fire season, according to the National Drought Mitigation Center and the Southwest Coordination Center.

While some parts of the Southwest saw cool and moist conditions over the past month, that wasn’t the case in California. said Chuck Maxwell, a meteorologist and predictive services manager with the Southwest Coordination Center in Albuquerque. About 94% of California has drought conditions ranging from moderate to exceptional, according to the U.S. Drought Monitor that measures conditions.

This year’s fires so far have burned nearly five times as much acreage as they did last year at this time. But the 24 square miles (62 square kilometers) scarred by about 2,600 fires this year is a small portion of last year’s totals of nearly 10,000 fires and an astronomical 6,653 square miles (17,231 square kilometers) burned. The fires killed 33 people and burned more than 10,000 homes and other structures.

Last year’s epic fire season lasted so long that it slowed Cal Fire’s attempts to set its own fires — the prescribed burns that they want to make an increasing part of their long-term efforts. They’ve been able to deliberately burn about 17 square miles (44 square kilometers) through April 30, down about 40% from last year.

Even a dry winter would have allowed for the prescribed burns, but officials got a late start due to the extreme fire activity the second half of last year, said Christine McMorrow, a spokeswoman for the California Department of Forestry and Fire Protection.

“Prescribed burns are a big part of our strategy,” said Newsom, who included $50 million for them in his proposed budget.

Cal Fire Chief Thom Porter called them “our best and most cost effective tool” for clearing both overgrown areas and invasive non-native plants. But he cautioned that “not every piece of California is ready for prescribed fire yet” with “a lot of areas where it’s not safe to put fire on the ground under any circumstances.”

Smoke from deliberate burns is also an issue, he said, though the state tries not to burn near sensitive locations like hospitals. And the state can’t intentionally allow fires to burn on private land without permission and safeguards in place, Porter said, although it is trying to get blanket approval from large forestland owners to allow fires to continue in a safe manner once they’ve started.

That means in many areas officials will have to continue using hand crews, machinery or animals to clear overgrown areas.

“Once we have safe areas to burn we will reintroduce fire and that will be the primary tool in the future, but I’m talking about decades out,” Porter said. “We have to build that over an incremental basis over the next many, many years to get to the right place and the right combination.”

The budget proposal that lawmakers will consider before June 15 includes more than $48 million to phase in a dozen new Cal Fire Fire Hawk helicopters and seven large C-130 air tankers like those Newsom highlighted at a Sacramento-area firefighting airbase Monday. It has nearly $34 million to replace two state helicopter bases and create a new emergency operations center in Southern California.

The rest is in the budget for the fiscal year starting July 1, although Porter said most of the firefighters already have been hired.