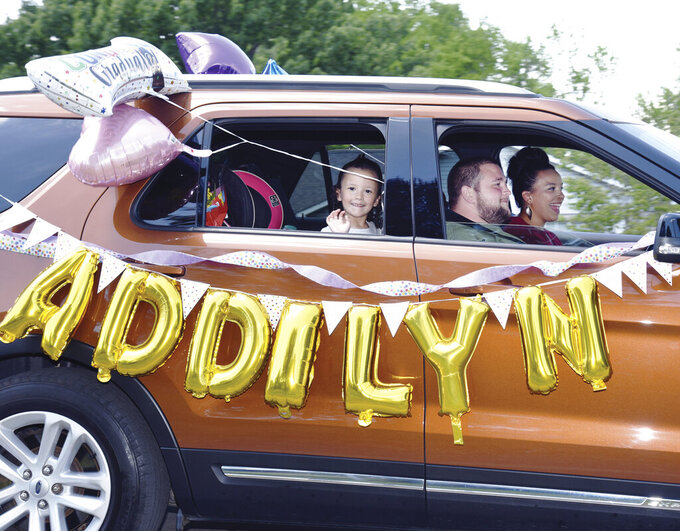 MEMPHIS, Tenn. (AP) — Demand for opioids such as fentanyl has surged during the new coronavirus outbreak in Tennessee’s largest county, where more than 100 people have died of drug overdoses since mid-March, officials said Tuesday.

Officials in Shelby County, which includes Memphis, said more than 750 drug overdoses and 112 deaths have been reported since March 15, when the county began issuing stay-at-home orders related to the virus response.

Overdose deaths have eclipsed the number of fatalities from COVID-19, the disease caused by the virus, Shelby County Health Department Director Alisa Haushalter noted during an online news conference. As of Tuesday, 88 people had died from the virus in the county, Tennessee's largest by population.

From April 7 to May 7, 58 people died of drug overdoses, the highest county total for a 30-day period since record keeping began in January 2019. The count is compiled from a database of incidents reported by first responders and the West Tennessee Regional Forensic Center.

The county health department has issued seven “spike alerts” in the past several weeks. The alerts call attention to a sharp rise in drug overdoses, including those involving heroin and fentanyl and other opioids. Fentanyl is a synthetic opioid that is many times stronger than heroin.

Social factors tied to the virus response have contributed to the increase of overdoses, including a sense of isolation from staying at home for an extended period, estrangement or separation from friends and family members, job losses leading to financial problems, and a fear that drug treatment facilities are not open or available for those in addiction recovery, U.S. Attorney Mike Dunavant said.

“All of that has an effect on the mental health and the physical health of people,” Dunavant said during the online news conference. “Unfortunately, what we know about addiction science, that does in fact drive demand for these substances up.”

Drug dealers are rising to meet that demand, Dunavant said.

The sharp rise in deaths does not surprise Dr. Nora D. Volkow, director of the National Institute on Drug Abuse. Volkow said she has been very concerned about the effect of the new coronavirus on opioid users on a national scale.

Volkow said more people may be using opioids alone, preventing them from getting naloxone, an overdose reversal drug.

“If you are social distancing yourself and injecting by yourself, no one is going to observe that overdose and no one can deliver naloxone,” Volkow said in a phone interview. “You are much more likely to die than if you were actually with someone else nearby that can help you.”

In Shelby County, drug courts and drug treatment facilities have remained open during the virus outbreak. The health department is providing free overdose reversal kits and treatment resources at locations around Shelby County this week.

Throughout the state, 18,378 cases of COVID-19 and 305 deaths have been reported. Businesses have begun gradually reopening in recent weeks after state, county and city officials loosened restrictions established under stay-at-home orders.

In Nashville, a live music bar sued the state and local governments in federal court Monday, claiming their stay-at-home orders violated civil liberties protected in the U.S. and Tennessee constitutions. The Local, which usually holds 28 to 30 live music events each month, says in its lawsuit that it’s highly probable it will have to close for good if it cannot reopen fully as a live music venue soon.

Republican Gov. Bill Lee’s pandemic orders allow six metro areas, including Nashville, to decide some of their own restrictions to curb the spread of the virus. Under Nashville’s reopening plan, it could be several weeks before venues such as The Local can feature live music again.

Nashville Mayor John Cooper’s office declined to comment on pending litigation. Lee's office did not immediately respond to a request for comment.

For most people, the new coronavirus causes mild or moderate symptoms that clear up within weeks. For some, especially older adults and those with existing health problems, it can cause more severe illness and be life-threatening.

Jonathan Mattise contributed to this report from Nashville.