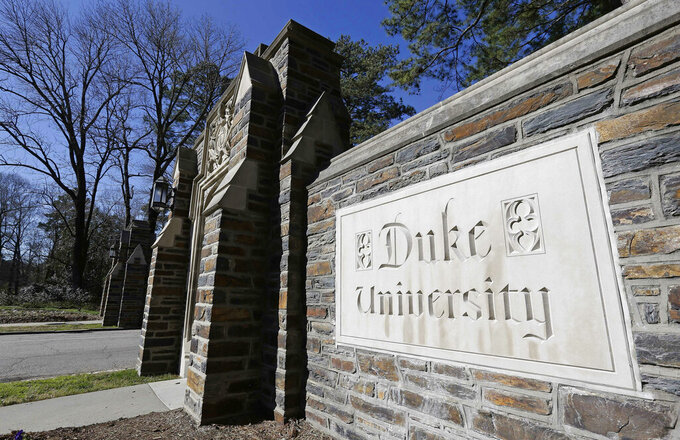 RALEIGH, N.C. (AP) — Duke University announced Wednesday that it is considering ending in-person classes as an uptick in COVID-19 cases over the course of five days worsens and students continue to violate health guidelines.

Of the 102 undergraduate students who tested positive for the coronavirus from March 5-9, Duke said most “either have a known Greek affiliation and/or are first-year male students in the Class of 2024."

Duke linked the cases to rush activities and off-campus parties hosted by fraternities, including Greek organizations that recently severed their affiliations with the university.

Campus officials warned in a message to students that those who host parties and flagrantly violate safety protocols could be suspended or expelled as a result of their actions.

Duke has been widely praised for its reopening procedures since the start of the pandemic and having fewer cases this semester than some of its nearby peers, including North Carolina State University and the University of North Carolina at Chapel Hill.

Since Jan. 3, just 0.2% of COVID-19 tests taken by Duke students have come back positive, according to the university's online dashboard showing 338 cases over the last two months. UNC-Chapel Hill has reported 656 positive cases among students year-to-date, while N.C. State has had 1,045 students become infected.

But the surge at Duke over the last week alarms administrators who reported that the campus Tuesday saw its highest single-day increase in cases among undergraduate students since the start of the pandemic. The 32 positive diagnoses accounted for over 3% of the statewide case count. For the first time since early October, North Carolina on Tuesday reported fewer than 1,000 new cases among its population of roughly 10.5 million people.

If numbers continue to worsen, the university said it would consider “instituting a nightly curfew, further restrictions on campus navigation and access, ending in-person courses or cancelling planned activities.”

In the meantime, Duke will increase surveillance testing for all undergraduates and require those returning from travel to sequester in their rooms or apartments until they clear two rounds of tests, including a 48-hour notification period after the second test.

Unless otherwise approved, all rush events must be virtual. Any campus gathering must be limited to 10 people indoors or outdoors.

“We are confident that you all can adhere to this new guidance so that we can flatten the curve on campus without employing additional steps to restrict campus life,” the university told students.