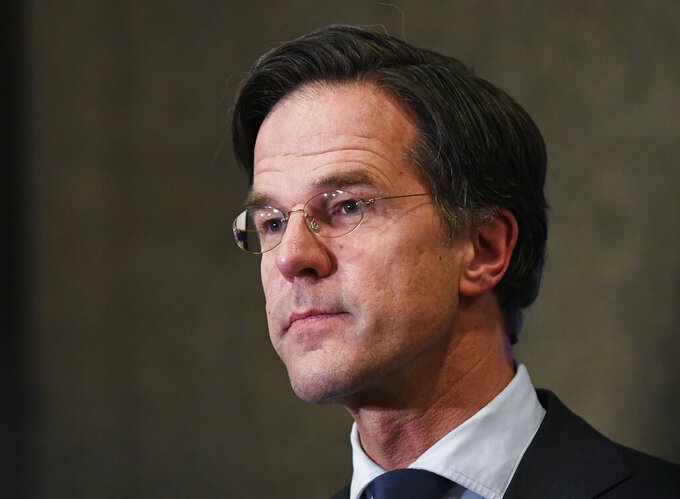 Dutch caretaker Prime Minister Mark Rutte speaks with the media following exit polls in the general election in The Hague, Netherlands, March 17, 2021. Dutch voters pushed Rutte towards a fourth term in office in a general election Wednesday, bolstering his conservative party's position as the biggest in parliament and boosting a key ally into second place, an exit poll suggested. (Piroschka van de Wouw/Pool via AP)

THE HAGUE, Netherlands (AP) — Preliminary discussions to map out the contours of the next Dutch governing coalition were stalled Thursday by a positive COVID-19 test and an inadvertent display of preparatory notes by one of the officials leading the talks.

The developments abruptly halted coalition talks that had been happening against a backdrop of rising coronavirus infections and growing impatience in the Netherlands with the country's months-long virus lockdown.

At the eye of the political storm was Kajsa Ollongren, one of two so-called “scouts” tasked with investigating possible coalitions following a parliamentary election last week.

Talks were initially suspended Thursday morning after Ollongren headed home after hearing she had tested positive for the coronavirus. Then she was photographed carrying clearly legible notes laying out talking points for the coalition discussions.

Among the legible text in the notes was a line saying that left-leaning parties “aren’t really holding onto one another” and that there was “little enthusiasm” for a minority coalition.

After lawmakers angrily reacted, the government information service said that Ollongren and the other scout, Annemarie Jorritsma, decided to halt their work immediately.

The government information service said in a statement that Ollongren and Jorritsma “observe that the publication of these notes means that they can no longer continue their work with an open mind and without prejudice.”

The information service described the comments as “preparatory notes” and not a description of talks the scouts held with party leaders earlier this week.

Ollongren is caretaker interior minister and deputy prime minister in Prime Minister Mark Rutte's outgoing coalition government. She is a member of the centrist D66 party that finished second to Rutte's conservative VVD party; Jorritsma is a VVD senator.

They were later replaced by two more ministers from Rutte’s caretaker Cabinet who will continue the delicate talks, Tamara van Ark of the VVD and Wouter Koolmees of D66.

The coalition talks are expected to take weeks or months. Rutte’s party won the most seats in last week's election for the lower house of parliament but will need to enlist other parties to gain a majority in the 150-seat legislature.

Ollongren and Jorritsma had been scheduled to meet Thursday with Rutte and D66 leader Sigrid Kaag.

Rutte has attempted to inject urgency into the talks amid infection rates that have risen sharply in recent weeks despite a tough nationwide lockdown in the Netherlands, where more than 16,500 people are confirmed to have died of COVID-19.

Ollongren is the second member of Rutte’s Cabinet to test positive this week, following state secretary for economic affairs and climate Mona Keijzer. Rutte, who oversaw a Cabinet meeting on Friday, has tested negative.

The government information service also said Thursday that although Cabinet meetings can be held in person with social distancing, they will as a precaution be held digitally.