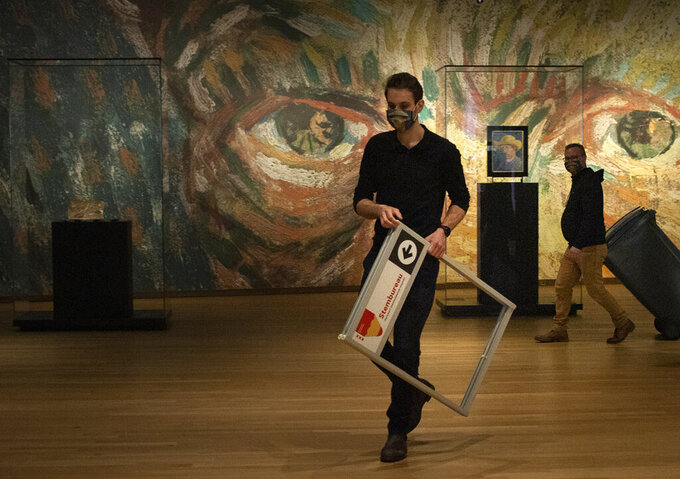 A ballot box is brought to a polling station inside the Van Gogh museum during a demonstration for the media in Amsterdam, Netherlands, Tuesday, March 16, 2021. Polling stations opened across the Netherlands early Monday and Tuesday in a general election that has been spread over three days to allow people to vote safely during the coronavirus pandemic. The Van Gogh museum is closed because of the pandemic. (AP Photo/Peter Dejong)

AMSTERDAM (AP) — The leaders of the top eight parties in the Dutch general election made a final pitch for votes Tuesday night in a televised debate on the eve of the last day of voting in the coronavirus-affected national election.

The lead of Prime Minister Mark Rutte's People's Party for Freedom and Democracy in polls has been shrinking in recent weeks but it is still around 10 percentage points ahead of its nearest rival, the anti-immigration Party for Freedom led by anti-Islam firebrand Geert Wilders.

The two clashed in the debate, with Rutte casting himself as the leader to guide the Netherlands out of the coronavirus crisis and accusing Wilders of failing to suggest solutions.

Wilders drew attention to Rutte's leadership during a long-running scandal caused by tax officials wrongly accusing thousands of parents of fraud, plunging many of them into debt and misery. Rutte and his government resigned in January to take political responsibility for the scandal.

“What are you still doing here?” Wilders asked. “Why don't you stand down and let somebody else take over? We can't let the pyromaniac put out the fire in the Netherlands.”

According to the final preelection version of respected Peilingwijzer survey of different opinion polls, Rutte's party is in line to win between 34 and 36 seats in the 150-seat lower house of parliament. Wilders' party is forecast to win 18-20 seats.

Rutte has led the last three Dutch ruling coalitions and has been in power for more than a decade. His popularity soared last year as he repeatedly appeared on television to solemnly explain the government's efforts to rein in the spread of the coronavirus. However, it has waned in recent weeks as the election neared and public impatience with the country's tough lockdown increased.

Even some voters who are generally satisfied with his handling of the pandemic are looking elsewhere.

“Yes, as prime minister I think he has done well. I also find him quite sympathetic, but I did not vote for him,” said Wilbert Vrijburg, a 31-year-old who works for a hi-tech startup, after he voted for pro-European party Volt in The Hague.

In Tuesday's debate, Wilders also clashed with Sigrid Kaag, leader of the centrist D66 party, on the theme of immigration.

Wilders called immigration “an existential problem for the Netherlands” that mainstream parties have failed to tackle, while Kaag told Wilders his years of fiery anti-immigration rhetoric had achieved nothing.

“None of your ideas is a solution,” she said. “You have been around for 20 years, Mr. Wilders. You have contributed nothing to the economy or the future of the Netherlands and the Netherlands has not become any safer.”

Interior Minister Kajsa Ollongren on Tuesday told municipalities that are responsible for counting votes to amend the way they deal with postal votes after reports emerged Monday of what her ministry called “procedural mistakes" with postal votes.

“If people have made this mistake by accident but had the intention, of course, to vote, then it is not fair” if their votes aren't counted, Ollongren told reporters in The Hague.

The increased use of postal voting for people age 70 and over is among measures intended to make the election safe amid stubbornly high coronavirus infection rates in the Netherlands, a nation of just over 17 million where more than 16,000 people are confirmed to have died of COVID-19.

Voting has been spread out over three days, starting Monday, with the first two days intended to allow people who are considered more vulnerable to the virus to vote in polling stations that aren't as busy as on normal election days.

In Amsterdam, a drive-thru voting station was set up at a conference center for cars and bicycles.

Sandra Neerbos, 49, took advantage of the early voting in The Hague. She said the most important issues to her are health care and security.

“I think it's important that the health care system is well handled because it has suffered major budget cuts,” she said.

The final day of voting is Wednesday and results are expected to begin rolling in after polling stations close at 9 p.m. (2000 GMT) and into Thursday.

The party that wins the most seats will be first in line to lead talks to form the next ruling coalition. If that is Rutte, and he succeeds in cobbling together a new government, he could become the country’s longest-serving prime minister.