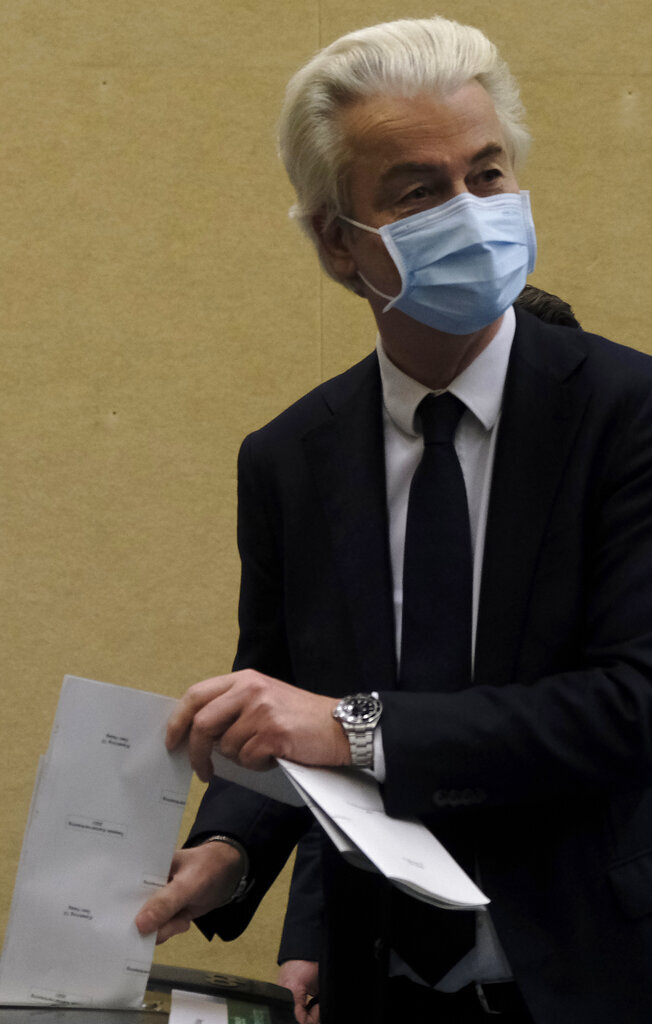 Populist Dutch anti-immigration lawmaker Geert Wilders casts his vote in a general election in The Hague, Wednesday, March 17, 2021. Polling stations have opened opened across the Netherlands from Monday in a general election that has been spread over three days to allow people to vote safely during the coronavirus pandemic. (AP Photo/Patrick Post)

THE HAGUE, Netherlands (AP) — The process of forming a new Dutch governing coalition began Thursday, a day after Prime Minister Mark Rutte's conservative party powered to a fourth consecutive victory in a vote held during a nationwide lockdown and dominated by the COVID-19 pandemic.

The feat put Rutte in position to lead coalition talks, most likely with another big winner — the centrist, pro-European D66 party led by former diplomat Sigrid Kaag, who danced on a table Wednesday night when an exit poll showed her party capturing one of its biggest-ever victories.

However those two parties will likely need at least two more partners to form a majority coalition. According to the national news agency ANP, based on 88% of votes counted, Rutte's party, known by its Dutch acronym VVD, won 35 of the 150 seats in the lower house of parliament while D66 garnered 24.

Rutte wants to move quickly to hammer out a coronavirus recovery plan before getting into a government blueprint for the new coalition's four-year term.

“We must have plans in place to unlock the country," Rutte told his lawmakers in a virtual meeting Thursday.

The splintered political landscape in the Netherlands — 17 parties were forecast to have won at least one seat — could make coalition talks difficult.

Party leaders took the first step Thursday by appointing two “scouts,” one from Rutte's VVD and a second from D66, to examine different parties' wish lists and investigate possible coalitions ahead of formal talks.

The VVD selected Senator Annemarie Jorritsma, while D66 chose Kajsa Ollongren, who was interior minister and deputy prime minister in Rutte's last Cabinet. They plan to start talks with party leaders Monday and write a report for the newly elected lawmakers ahead of their first sitting on March 31.

“In times of corona, it is of course important to form a new Cabinet as soon as possible.. that can get to work on the economic and social social recovery,” Jorritsma said, adding that she hopes it will be possible to form a new coalition before the summer.

Rutte’s victory had been widely predicted even though the election came just two months after his last coalition resigned over a scandal in which the country’s tax office wrongfully labeled thousands of families who claimed child welfare benefits as fraudsters.

The other big winner of the night was the far-right populist Forum for Democracy, which rose from two to eight seats after its flamboyant leader, Thierry Baudet, campaigned on a pledge to end the country's coronavirus lockdown.

As other party leaders spoke to reporters Wednesday night, Baudet was conspicuous by his absence. By Thursday morning, the Twitter hashtag “waarisbaudet” or “whereisbaudet” was trending in the Netherlands. The party eventually expressed its gratitude to voters.

“A half million people in the Netherlands have said: we want our lives back. A thunderous blow against the endless lockdowns. A huge victory for freedom,” the party tweeted.

Baudet, arriving at parliament for a meeting of party leaders, told reporters he “was actually hoping for more” seats in the election.

It was something of a political resurrection for the party that imploded late last year amid reports of anti-Semitic text messages among its youth wing.

Despite the gains for Baudet, the far-right populist bloc in the Netherlands is unlikely to take part in any new coalition. Anti-Islam lawmaker Geert Wilders, whose Party for Freedom lost three seats and is now the country's third-biggest party, said he would again lead the opposition.

The political left also looks likely to be out of power after parties lost seats or failed to gain ground after four years in opposition to Rutte's outgoing center-right coalition. The Green Left party, a big winner in the 2017 election, was forecast to lose half of its 14 seats.

The Dutch election, coming just months after Britain's Brexit divorce with the European Union came into full force, saw gains among pro-EU parties. D66 has long been a staunch defender of the 27-nation bloc and among new parties in the lower house was the pro-European party Volt, which was forecast to win three seats.

Voter Tim Logemann said he was disappointed in the result.

“I had hoped that the VVD would definitely lose some points,” he said. “I personally voted for one of the smaller parties that didn’t get any points at all, so that’s even more disappointing."

Kaag, who served as minister for foreign trade and development cooperation in Rutte’s last coalition, had campaigned as a viable alternative to Rutte as national leader in a country that has never had a female prime minister. Speaking to party lawmakers Thursday, she laid out her party's key themes.

“We want unity, renewal and sustainability," she said. “D66 must and will make that happen.”