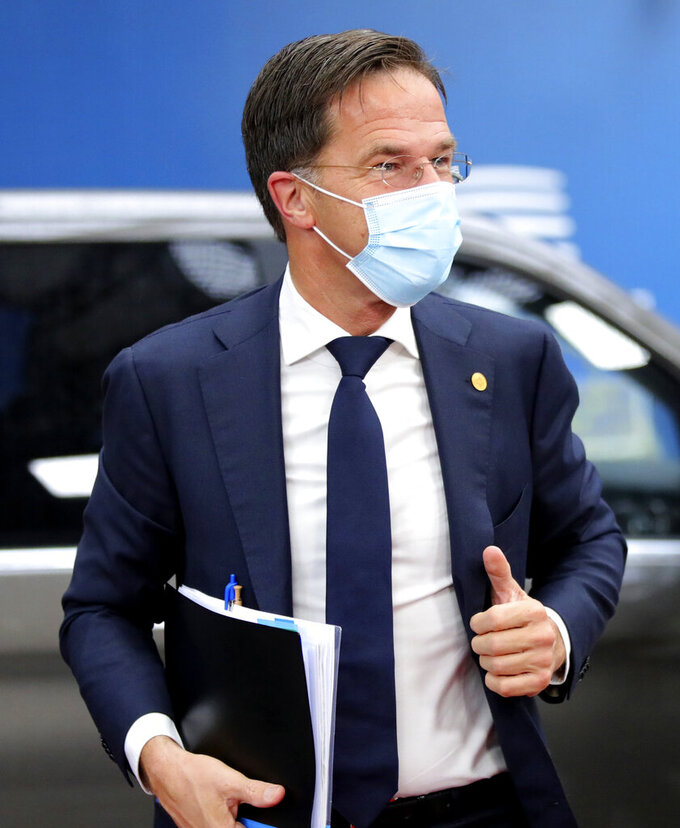 FILE - In this file photo dated Friday, Oct. 2, 2020, Dutch Prime Minister Mark Rutte arrives for an EU summit at the European Council building in Brussels. The Netherlands is holding a general election over three days starting March 15 2021 because of fears that busy polling stations could spike infections, which comes after Prime Minister Mark Rutte has spent more than a decade in power. (AP Photo/Olivier Matthys, FILE)

THE HAGUE, Netherlands (AP) — Dutch Prime Minister Mark Rutte on Monday extended the country's tough coronavirus lockdown until the end of the month, but he added a note of hope to his message to a pandemic-weary nation by predicting that a “tipping point is coming when the vaccine gains the upper hand over the virus and more will be possible.”

Rutte was speaking a week before a parliamentary election in the Netherlands at which he is seeking a fourth term that could make him the longest-serving Dutch leader. The pandemic is casting a long shadow over other issues in the countdown to three days of voting that start on March 15.

Rutte said that the 9 p.m. to 4:30 a.m. curfew that is part of the lockdown will remain in force through the election, when polling stations are open until 9 p.m., but people working at or visiting voting booths won't be fined for curfew breaches.

The government also extended its call for people to avoid all but unavoidable foreign travel until April 15.

In minor tweaks to the lockdown, Rutte said that from March 16 children up to the age of 12 will be allowed to resume swimming lessons and adults will be allowed to play sports together outdoors in groups of no more than four people, up from the current two.

Polls have shown support for the coronavirus lockdown eroding in recent weeks as this nation of 17 million grows tired of shuttered cafes, restaurants, museums and other meeting places.

A group representing nonfood retailers across the country went to court Monday seeking an order allowing them to reopen to the public. And on Tuesday the country's umbrella organization for the hospitality industry is launching separate legal proceedings over delays in the payment of government support to businesses hit by the lockdown.