Duterte again delays abrogation of key security pact with US 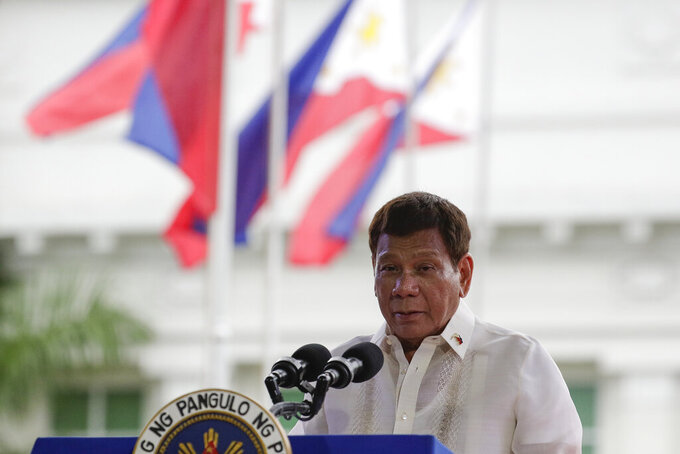 MANILA, Philippines (AP) — Philippine President Rodrigo Duterte on Monday again suspended his decision to terminate a key defense pact with the United States, which he has asked to provide more aid and coronavirus vaccines in exchange for retaining the accord.

Foreign Secretary Teodoro Locsin Jr. said, without elaborating, that Duterte suspended the abrogation of the Visiting Forces Agreement for another six months to allow both sides to address his concerns. Terminating the pact would be a major blow to one of America’s oldest alliances in Asia.

Duterte’s administration notified the U.S. government in February last year that it intended to abrogate the 1998 agreement, which allows the entry of large numbers of American forces for joint combat training with Philippine troops and lays down the legal terms for their temporary stay.

The pact’s termination would have taken effect after 180 days, but Duterte has repeatedly delayed the effectivity of his decision.

Defense Secretary Delfin Lorenzana welcomed the president’s decision, which he said would give the two governments more time to review the pact.

“Our bilateral cooperation with the U.S. is geared toward upholding our national interest and, to the extent necessary, to enhance the Philippines’ defense capability,” Lorenzana said.

Duterte said in February that if the U.S. wants to keep the agreement, “they have to pay.”

In December, he warned that he would proceed with the abrogation if the U.S. does not provide at least 20 million doses of vaccine.

“If they cannot deliver even a minimum of 20 million vaccine, they better get out. No vaccine, no stay here,” Duterte said.

Critics hit Duterte for the remarks, which Sen. Panfilo Lacson, who heads the Senate committee on national defense and generally supports Duterte, said “may have given the impression that the Philippines is a nation of extortionists.” Lacson said “one cannot put a price tag on the value” of the Visiting Forces Agreement.

Duterte has often lashed out at U.S. security policies while nurturing relations with China and Russia. But his foreign and defense secretaries have cited the importance of the U.S. alliance.

The U.S. military presence in the region has been seen as a counterbalance to China, which has aggressively asserted claims to vast areas of the disputed South China Sea despite a 2016 international arbitration ruling that invalidated their historic basis. China, the Philippines, Vietnam and three other governments have been locked in the territorial standoff for decades.