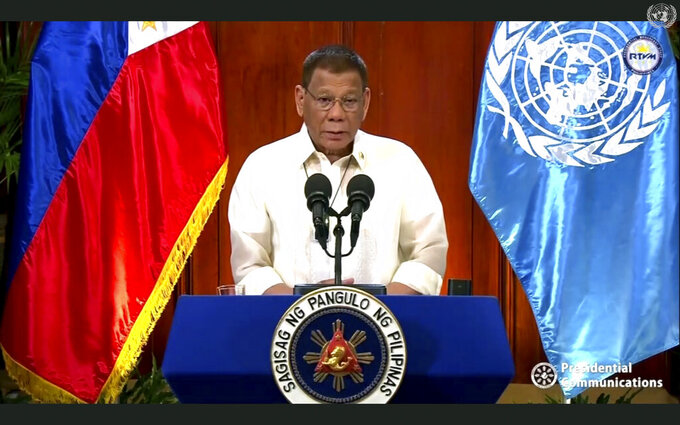 In this image made from UNTV video, Rodrigo Roa Duterte, president of the Philippines, speaks in a pre-recorded message which was played during the 75th session of the United Nations General Assembly, Tuesday, Sept. 22, 2020, at UN headquarters. The U.N.'s first virtual meeting of world leaders started Tuesday with pre-recorded speeches from some of the planet's biggest powers, kept at home by the coronavirus pandemic that will likely be a dominant theme at their video gathering this year. (UNTV via AP)

MANILA, Philippines (AP) — The Philippine president got rare praises Wednesday from his key critics for invoking before the United Nations a 2016 arbitration ruling that invalidated China’s vast territorial claims in the South China Sea, in a surprise move that will likely pique Beijing.

President Rodrigo Duterte made one of his strongest defenses of the Philippine victory in the arbitration case in his first address before the annual U.N. General Assembly where world leaders spoke mostly in prerecorded videos due to the pandemic. China has long refused to bring the issue to any international arena.

Duterte, who has nurtured close ties with China since taking office in mid-2016, has long been criticized for refusing to immediately and forcefully demand Chinese compliance with the ruling by a U.N.-backed tribunal. It found China’s claims on virtually the entire South China Sea on historical grounds inconsistent with international maritime law.

China refused to take part in the arbitration, which was initiated by Duterte’s predecessor, and has dismissed the ruling as a “sham.” Beijing prefers direct negotiations with each of its rival claimant states and has vehemently refused to have the long-raging disputes internationalized for fears the United States and its allies would find a way to intervene.

Duterte welcomed the increasing number of countries that have expressed support for the ruling, which he said stood for “the triumph of reason over rashness, of law over disorder, of amity over ambition.”

“The award is now part of international law, beyond compromise and beyond the reach of passing governments to dilute, diminish or abandon,” Duterte said, without naming China. “We firmly reject attempts to undermine it.”

Chinese officials did not immediately issue any reaction.

Albert del Rosario, a former Philippine foreign secretary who brought the disputes with China to international arbitration, said he was heartened by Duterte’s move. By underscoring the decision before the annual U.N. gathering of world leaders, Duterte “has acted more faithfully to our constitution, which mandates him and our military to secure our country’s sovereignty and protect our lands and seas,” del Rosario said.

He urged the Duterte administration to secure the backing of more countries so the ruling could be raised more emphatically in next year’s U.N. General Assembly.

Antonio Carpio, a retired Philippine Supreme Court justice who helped in the arbitration case, commended Duterte and hoped that “this is the policy that the Duterte administration will implement across all levels” in protecting Philippine maritime rights and seeking international support to enforce the ruling.

“Mr. Rodrigo Duterte’s 360-degree turn ... is a big victory for international law and Philippine sovereignty against his own defeatist policy on China,” former human rights chief Etta Rosales said, adding the president succumbed to pressure for him to uphold international law.

Duterte also defended his deadly anti-drug crackdown and played down criticism from human rights advocates in his speech. He has previously harshly criticized the U.N. for raising alarm over his campaign against illegal drugs and threatened to withdraw the Philippines from the world body, which he says his government now values for its role in fighting the global coronavirus pandemic.