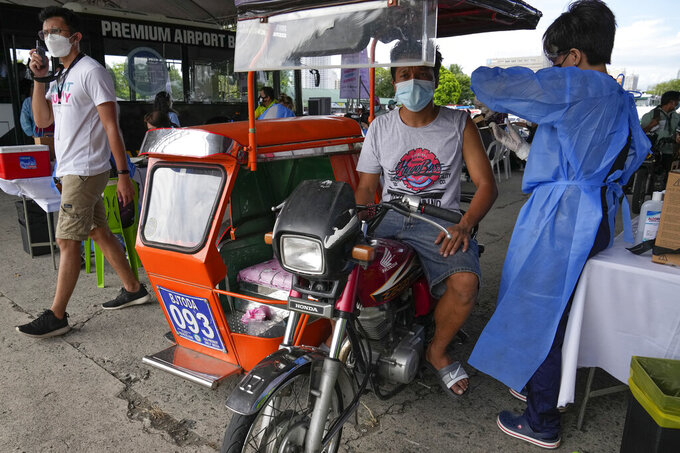 A pedicab driver is inoculated with China's Sinovac COVID-19 Vaccine in Manila, Philippines on Tuesday, June 22, 2021, in Manila, Philippines. The Philippine president has threatened to order the arrest of Filipinos who refuse the COVID-19 vaccination and told them to leave the country for hard-hit countries like India and the United States if they would not cooperate with massive efforts to end the pandemic. (AP Photo/Aaron Favila)

MANILA, Philippines (AP) — The Philippine president has threatened to order the arrest of Filipinos who refuse COVID-19 vaccination and told them to leave the country if they would not cooperate with efforts to end a public health emergency.

President Rodrigo Duterte, who is known for his public outbursts and brash rhetoric, said in televised remarks Monday night that he has become exasperated with people who refuse to get immunized amid a health crisis then help spread the coronavirus.

“Don’t get me wrong. There is a crisis being faced in this country. There is a national emergency. If you don’t want to get vaccinated, I’ll have you arrested and I’ll inject the vaccine in your butt,” Duterte said.

“If you will not agree to be vaccinated, leave the Philippines. Go to India if you want or somewhere, to America,” he said, adding he would order village leaders to compile a list of defiant residents.

Justice Secretary Menardo Guevarra acknowledged on Tuesday that there was no Philippine law criminalizing refusal to get vaccinated against the coronavirus.

“I believe that the president merely used strong words to drive home the need for us to get vaccinated and reach herd immunity as soon as possible,” Guevarra said.

A human rights lawyer, Edre Olalia, raised concerns over Duterte’s threat, saying the president could not order the arrest of anybody who has not clearly committed any crime.

Duterte and his administration have faced criticism over a vaccination campaign that has been saddled with supply problems and public hesitancy. After repeated delays, vaccinations started in March, but many still opted to wait for Western vaccines, prompting some cities to offer snacks and store discounts to encourage people to get immunized with any vaccine.

Duterte blamed the problem on wealthy Western countries cornering vaccines for their own citizens, leaving poorer countries like the Philippines behind. Some officials said the bigger problem was inadequate vaccine supply more than public hesitancy.

Duterte also walked back on an earlier remark that required people to wear plastic face shields over face masks only in hospitals as an added safeguard. After experts briefed him on the threat of more contagious coronavirus variants, Duterte declared it mandatory for people to continue wearing face shields indoors and outdoors.

The Philippines is a COVID-19 hotspot in Asia, with more than 1.3 million cases and at least 23,749 deaths.