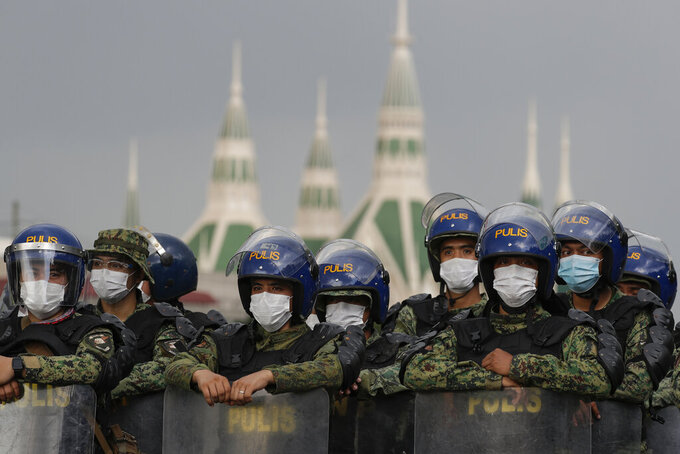 Police officers wearing face masks stand guard as they secure the road leading to the House of Representatives where President Rodrigo Duterte will deliver his 5th State of the Nation Address (SONA) on Monday, July 27, 2020, in Manila, Philippines. (AP Photo/Aaron Favila)

MANILA, Philippines (AP) — Philippine President Rodrigo Duterte warned would-be criminals on Monday that “bodies will pile up" if they turn to robberies and other crimes during the coronavirus pandemic and urged that the death penalty be restored for illegal drugs.

Duterte touched on a wide range of issues in his annual state of the nation address before Congress, at times turning combative. He threatened two leading telecommunication companies with closure for what he said was their spotty cellphone service but expressed helplessness in response to China's seizure of Philippine-claimed territories in the South China Sea.

Duterte acknowledged that his government’s handling of the coronavirus pandemic was “far from perfect” and but gave assurances that “we will not stop until we get things right and better for you.”

He sought congressional passage of a bill that will again grant him emergency powers to realign government budgets for use in the continuing health crisis.

There have been widespread complaints about the government's response to the outbreak, including long delays in the delivery of cash and food aid to millions of poor families and the inability to reach a targeted number of daily virus tests.

The Philippines remains a Southeast Asian hot spot for the virus, with more than 80,000 confirmed cases, including nearly 2,000 deaths.

Duterte said people were worried not only about the virus but also about safety and public mobility during the pandemic. He said crimes may increase but pledged that he wouldn't permit them to spiral out of control in any city.

Addressing would-be criminals, Duterte warned, “you know what will happen to you.”

“You commit holdups, you commit rape, you commit all sorts of things and you harm the public, then I’ll be your enemy,” said Duterte, who built a political name with his extra-tough approach to crime as a mayor. “If you return to the old ways, there will be piles of bodies again and I will surely hunt you down.”

He urged lawmakers to swiftly pass legislation reimposing the death penalty for illegal drugs, saying the drug menace has destroyed families and the youth.

Duterte’s bloody anti-drug crackdown, which he launched after taking office in mid-2016, has left thousands of mostly poor suspects dead and alarmed human rights groups and Western governments. He and law enforcers have denied committing extrajudicial killings, although he has openly threatened drug dealers with death.

Hundreds of protesters defied police threats of arrests and rallied at the University of the Philippines on Monday to condemn the drug campaign killings and a new anti-terror law they say could muzzle legitimate dissent.

They also protested the closure of the country’s largest TV network after a committee of the House of Representatives, dominated by Duterte’s allies, rejected a new 25-year franchise for ABS-CBN Inc., which Duterte has repeatedly threatened with closure over critical reporting.

At least 34 suspected protesters were taken into police custody in three areas, police said. Public gatherings of more than 10 people are prohibited under coronavirus regulations but protesters accused the government of using the health crisis to mute complaints over the government’s handling of the pandemic and other issues.