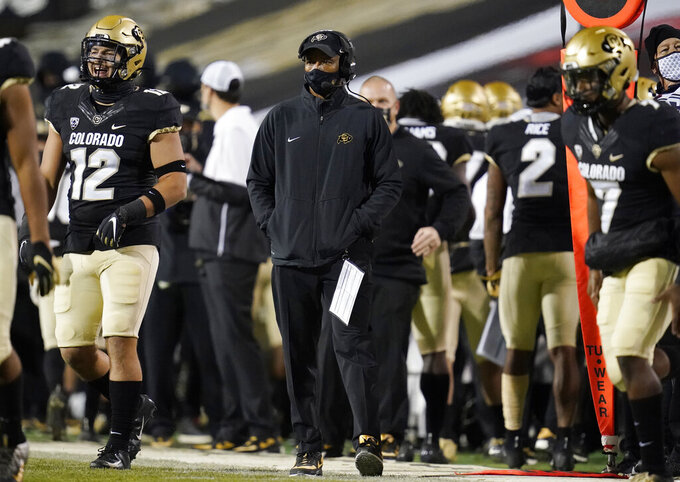 BOULDER, Colo. (AP) — The Colorado Buffaloes certainly hope to rise and then shine for the earliest kickoff in Folsom Field history.

No strong coffee necessary, either, to perk up No. 21 Colorado after its game against Utah was moved from Friday night to Saturday morning to accommodate television.

This provides all the needed caffeine to motivate the Buffaloes: A chance to remain among the undefeated. And maybe, just maybe, an appearance in the Pac-12 title game as well — with a little help.

This much is known: Utah's two-season reign as Pac-12 South champion will soon end. But the Utes can have a say in who takes over since a win would derail the division title aspirations of Colorado (4-0, 3-0 Pac-12).

The Buffaloes need a victory over the Utes (1-2, 1-2) and some assistance in the form of a UCLA (3-2, 3-2) upset of No. 16 Southern California (4-0, 4-0) later Saturday to claim a spot in the Pac-12 title game. It could come down to a tiebreaker scenario in part because Colorado's game at USC on Nov. 28 was canceled due to virus concerns within the Trojans program.

Really, though, the Buffaloes are only thinking of the task at hand. They've lost three straight to the Utes.

“We’ve got to control what we have in front of us,” first-year Colorado head coach Karl Dorrell said. “We still have so much work to go.”

The bowl-eligible Buffaloes had the game moved to 10:05 a.m. local time for television. It takes the place of the Michigan-Ohio State contest, which was canceled due to COVID-19 issues within the Wolverines program. Colorado said in a release that this will be the earliest kickoff in Folsom Field’s 97-year history. The earliest was when Nebraska and Colorado began at 10:09 a.m. local time on Nov. 23, 2007.

Count Utah coach Kyle Whittingham as someone not surprised by Colorado's success. He saw the foundation being built a season ago under coach Mel Tucker, who left for Michigan State in February and set in motion the hiring of Dorrell.

“In their situation, the cupboard was not left bare,” Whittingham said. “They had a lot of good players when the last coach moved on. ... They’ve done a nice job.”

The Utes have taken some time to warm up after getting a late start to the season due to virus issues, with their opening two games canceled. Following losses to USC and at Washington, Utah got on track last weekend by beating Oregon State.

“They’re 1-2 but they don’t play like a 1-2 team,” said Colorado tailback Jarek Broussard, who was named the league’s offensive player of the week after a 301-yard rushing performance at Arizona. “They’re a really good team.”

It will be frigid at Folsom Field with the game-time temperature expected to be in the upper-20s. There’s a chance of snow in the afternoon.

No. 22 in the Utes program would be freshman tailback Ty Jordan, who rushed for 167 yards against Oregon State.

“It was a breakout game of sorts for Ty,” Whittingham said.

The Buffaloes know they will have their hands full with a physical Utah team.

“It’s always the generic stereotype that them, Washington and Stanford are the most physical teams in the Pac-12,” Wells said. “We’ve got to buckle our chin strap and be ready to play against them.”

Colorado hasn’t allowed a point after halftime in the last two games against Arizona and San Diego State. The last time the Buffaloes shut out teams in back-to-back second halves was in 2002 when they beat Baylor (34-0) and Texas Tech (37-13).

Dorrell can't even imagine how fast Broussard will be once he sheds his knee brace. Broussard wears the brace on his left knee after suffering two injuries. He's rushed for 733 yards, which is six more than Rashaan Salaam had after four games during his 1994 Heisman-winning campaign.

“He’s quite comfortable wearing it. I’m not going to complain, because he’s being very productive," Dorrell said. "But I can’t wait for him to end up leaving that in the garage or in the dorm room or wherever that is and say, ‘I’m ready to go.’”

Don’t count on that just yet, though.

“I do plan on wearing knee brace for the remainder of the season,” Broussard said.