Economic signs point up for Nevada ahead of holiday weekend 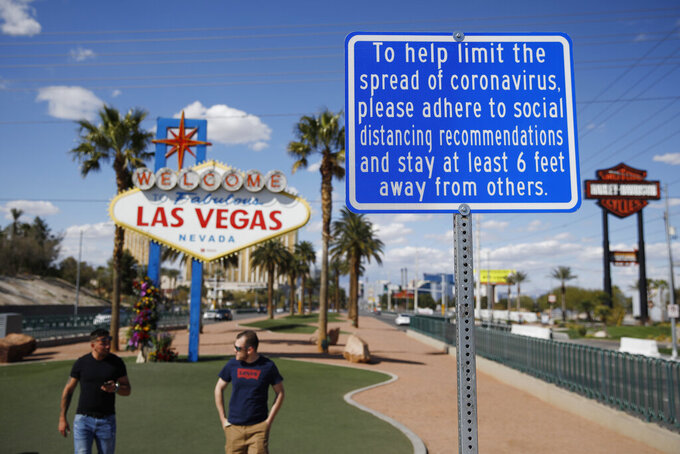 FILE - In this March 21, 2020, file photo, a sign advises people to practice social distancing to slow the spread of the coronavirus at the "Welcome to Fabulous Las Vegas Nevada" sign amid a shutdown of casinos along the Las Vegas Strip in Las Vegas. Economic signs are pointing up for Nevada gambling and tourism heading into the Memorial Day holiday weekend. New reports on Thursday, May 27, 2021, showed that casinos won $1 billion in April, the second month in a row, and monthly visitor volume increased for a fourth straight month. (AP Photo/John Locher, File)

LAS VEGAS (AP) — Economic signs are pointing up for Nevada gambling and tourism heading into the Memorial Day holiday weekend, with reports on Thursday showing that casinos won $1 billion in April for the second month in a row, and monthly visitor volume increased for a fourth straight month.

Most casinos can again host 100% capacity, even ahead of Gov. Steve Sisolak’s target date of June 1. Masks are still advised for people who haven't received coronavirus vaccinations and in some places with large indoor gatherings. Crowd restrictions and personal space restrictions will be virtually eliminated statewide next week.

Tourists have jammed sidewalks and returned to shows in Las Vegas in recent weeks — arriving mostly by vehicle, according to the Las Vegas Convention and Visitors Authority and the Nevada Highway Patrol.

The authority tallied nearly 2.6 million visitors last month in Las Vegas — a 15.4% jump in volume since March and more than twice the 1.25 million visitors the area hosted in December. But the number was still down about 27% from the pre-pandemic level in April 2019.

The highway patrol said it is teaming with the California Highway Patrol and Las Vegas police during the holiday weekend to focus extra patrols on busy Interstate 15 between Las Vegas and Los Angeles, particularly near the Nevada-California border where weekend traffic jams of 12 miles (19 kilometers) or more have become common.

At McCarran International Airport, another economic measure showed improvement with a report Tuesday that more than 2.9 million passengers arrived and departed in April. That was up from 2.6 million passengers in March but down 32% from April 2019.

International travel has not fully resumed and only accounted for 1% of the April total.

Convention business and room bookings are expected to jump next month, after the annual World of Concrete opens June 8 as the first major trade show since the pandemic began. The Las Vegas Convention Center also will debut its nearly $1 billion exhibit hall expansion.

The state Gaming Control Board said last month’s overall “casino win” of nearly $1.04 billion was up a robust 11% compared with $936 million in April 2019.

Comparisons with a year ago weren’t relevant because casinos statewide were closed from mid-March to early June 2020 to prevent the spread of COVID-19. Before they were shuttered, casinos had taken in more than $1 billion for three consecutive months. They reached the $1 billion mark again in March.

Sisolak, a Democrat, let casinos reopen at limited capacity in June 2020 and loosened occupancy limits statewide in increments. Most coronavirus mitigation measures were lifted when oversight returned to local control on May 1.

Clark County casinos won almost $865.5 million of the state total, including about $483 on the Strip and $76 million downtown.

Washoe County, including Reno, Sparks and north Lake Tahoe, reported more than $87 million in casino winnings, the highest since July 2008.

The state collected more than $79 million in revenues based on the April numbers, which are closely watched because casino taxes are second only to sales taxes as a percentage of Nevada’s annual budget. The state has no personal income tax.