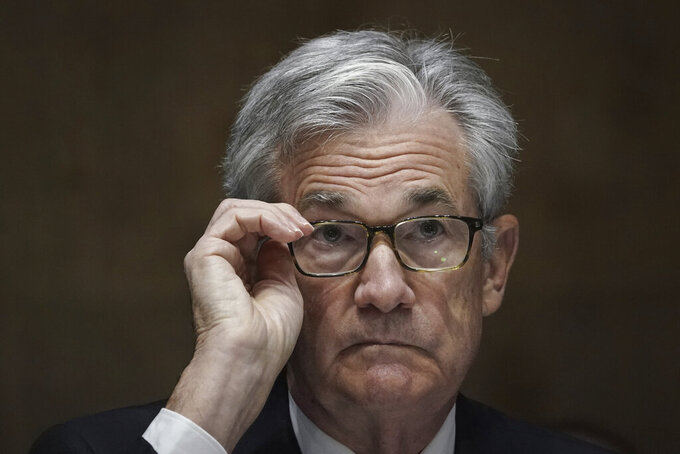 FILE - In this Thursday Sept. 24, 2020 file photo, Federal Reserve Board Chairman Jerome Powell testifies during a Senate Banking Committee hearing, on Capitol Hill in Washington. The Fed on Wednesday, Nov. 25, released minutes of its Nov. 4-5 meeting revealing that while officials believed that no changes were needed to the bond purchase program at that time, “they recognized that circumstances could shift to warrant such adjustments.” (Drew Angerer/Pool via AP, file)

The Fed on Wednesday released minutes of its Nov. 4-5 meeting revealing that while officials believed that no changes were needed to the bond purchase program at that time, “they recognized that circumstances could shift to warrant such adjustments.”

The Fed since June has been buying $120 billion in bonds each month to keep downward pressure on long-term interest rates as a way of giving the economy a boost as it struggles to emerge from a deep recession.

The purchases have included $80 billion a month in Treasury bonds and $40 billion in mortgage-backed securities.

With the economy showing signs of slowing in the face a resurgence in coronavirus cases and a return to shutdowns in some areas, there has been market speculation that the Fed could decide to boost the size of its monthly purchases.

The minutes show that while no decision was taken on what to do or when, Fed officials were keeping their options open. Some analysts believe the Fed will make an announcement on boosting the bond purchase program at its next meeting on Dec. 15-16, especially if there has been no movement by Congress to provide more economic relief to individuals and businesses.

The minutes said that many Fed officials “judged that asset purchases helped provide insurance against risks that might reemerge in financial markets in an environment of high uncertainty.”

Concern has been growing among economists that the economy is slowing after an initial rebound this summer and could even topple into a double-dip recession in the early part of 2021 if Congress does not replenish expiring support programs.

At the White House Wednesday, Peter Navarro, one of President Donald Trump's economic advisers, told reporters that a “sober” reading of the economic recovery shows “we are facing ... a chasm ahead for millions of Americans unless there can be a bipartisan” deal to provide further economic relief.

The minutes released Wednesday covered the Fed’s Nov. 4-5 meeting, held just after the November elections, and were released with the customary lag of three weeks.

At the meeting, the central bank kept its benchmark interest rate at a record low near zero and signaled that it was prepared to do more if needed to support the economy.

A multitrillion-dollar stimulus effort enacted in the spring has helped support millions of Americans who have been thrown out of work and provided further assistance to struggling individuals and businesses.

But many of those programs have expired and jobless benefits are due to run out for millions of Americans by the end of this year.

Federal Reserve Chairman Jerome Powell had said at a news conference following the two-day meeting that Fed officials had discussed whether and how a bond buying program might be altered to provide more economic support.

In addition to increasing the size of the program, the Fed could decide to alter the composition of the bonds purchases to focus on buying long-term securities as a way of putting added downward pressure on long-term rates.