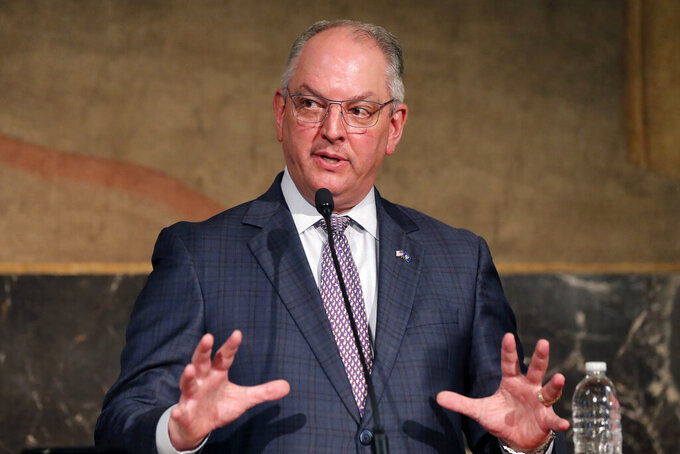 Louisiana Gov. John Bel Edwards speaks to reporters at a briefing on the state's efforts against the coronavirus pandemic in Baton Rouge, La., Monday, May 4, 2020. (AP Photo/Gerald Herbert)

BATON ROUGE, La. (AP) — Though he had worried about the drain on Louisiana's treasury, Gov. John Bel Edwards has signed into law the full multimillion-dollar package of business tax breaks that lawmakers passed in their June special session as a coronavirus recovery effort.

The Democratic governor agreed to temporarily suspend part of the corporate franchise tax for one year, to give a sizable tax break to the state's casinos and to expand tax credit programs that lawmakers previously curbed as giveaway programs that didn't benefit the state.

He signed measures that will extend Louisiana's expiring historic tax credit program; allow businesses required to collect and remit sales taxes to keep a larger portion of those tax collections for themselves; renew an expiring tax credit program for research and development expenses; and restart an expired program that provides state tax credits for investments in low-income communities.

Other tax breaks will broaden two programs for businesses that either create jobs in underserved areas deemed Enterprise Zones or that offer higher-paying jobs and health benefits to allow certain retailers, restaurants and bars to participate if they have no more than 50 workers.

Edwards hadn’t announced the bill signings by Wednesday or released any information about his decision. But the bill signings were posted to the Legislature’s website, showing the governor had agreed to enact nearly a dozen bills to expand and extend business tax credits, exemptions and incentive programs.

One of the largest tax breaks signed by Edwards will let riverboat casinos, the land-based casino in New Orleans and slot machines at Louisiana’s racetracks deduct from their taxes some of the money given to gamblers through promotional play wagers. The bill's price tag starts at $11 million in the first year and grows annually, according to legislative financial analysts.

The full package of bills, with extensions included, is estimated to cost about $25 million in the current budget year and at least $230 million in lost tax collections over five years, according to the bill analyses. But the estimates suggested uncertainty about the full impact, saying the measures could cost even more in later years.

The majority-Republican Legislature called itself into a 30-day session last month with an agenda largely crafted by business lobbying groups.

GOP lawmakers who sponsored the tax credits and exemptions described them as a needed boost to restaurants, hotels, retailers and other businesses struggling with closures and restrictions enacted by Edwards to combat the spread of the coronavirus.

Opponents — mostly Democrats but also a few Republicans — called the bills a giveaway to business that received too little review and will worsen budget uncertainty caused by the coronavirus in a state that spent years digging out of financial problems.

Throughout the session, Edwards had been unwilling to say what tax measures he might support. But he had said he was concerned about the impact on the state budget.

Republicans said the state will bring in tax dollars by stimulating the economy with the tax breaks, describing the cost estimates as skewed.