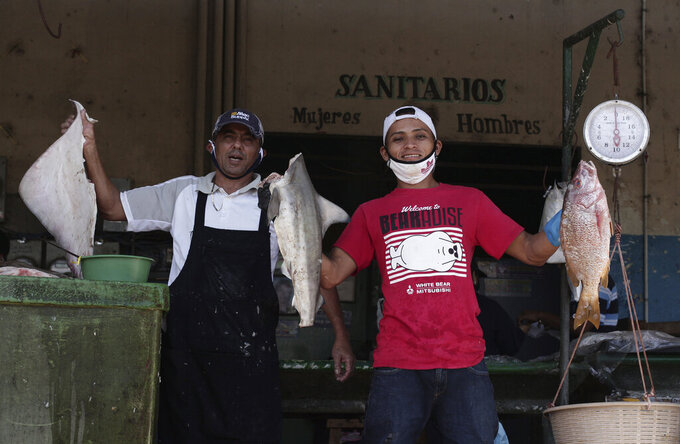 Seafood vendors show off their products at La Tiendona Market on their second day back to work, three-months after a lockdown aimed at preventing the spread of the new coronavirus in San Salvador, El Salvador, Tuesday, June 16, 2020. The Legislative Assembly passed legislation early Friday that would extend a state of emergency in the country for another two weeks, but eliminate the nearly universal mandatory stay-at-home order except for those who tested positive for COVID-19 and those returning from abroad. (AP Photo/Salvador Melendez)

That meant that 28-year-old auto mechanic Antonio Perdomo could go back to work on the outskirts of the capital.

With mask and hand sanitizer, Perdomo was the first to show up Tuesday morning for work. He had come last week to ask when he needed to arrive.

“We’re ready,” he said. “They’ve given us all of the instructions to take precautions, but not all of the workers are arriving.”

The shop is only allowed to operate at half capacity.

Perdomo managed to keep his job, but had barely received a paycheck in nearly three months.

“I haven’t stopped worrying,” he said. “My wife works and we have a little girl and that’s what worries me, that we’re going to get infected. We are going to take care of ourselves as best as we can.”

The government has reported nearly 4,000 infections and 76 deaths.

His wife works in a hair salon, one of the other businesses allowed to open Tuesday. But the quarantine drained their limited savings.

“I had a lot of plans, but everything came crashing down,” Perdomo said. “Neither I, nor my wife were working. Today we both return.”

Economy Minister María Luisa Hayem said the economy had been operating at only about a quarter of the usual rate. Through the first five phases of the reopening, she said, it should get back to about 58%.

Other business sectors resuming operations are cargo transport, food delivery and takeout, construction, textile manufacturing and sea ports. The airport is open for cargo and humanitarian flights, but not commercial traffic.

San Salvador Mayor Ernesto Muyshondt lifted the sanitary cordon that had been imposed on the capital’s center for months, but parks remained closed. Public transportation was not working, but there were notably more people in the streets and some street vendors even returned.

“I don’t know if we’re authorized, but I’m selling because I’m hungry and I have to work,” vendor Juan Martin said. “If they don’t say anything I’ll stay here.”

Health Minister Francisco Alabí warned that the economic reopening would increase exposure and likely lead to a new bump in infections. He urged people to be careful.

Alabí said the country’s health system was in a precarious position without available intensive care beds. He criticized the Supreme Court decisions for leaving the government without options to battle the pandemic.

He said 90 of the country’s 105 intensive care beds were occupied and there were new cases every day.

“The health system is at its limit, continuing this way we’re not going to be able to give attention to all Salvadorans,” Alabí said.