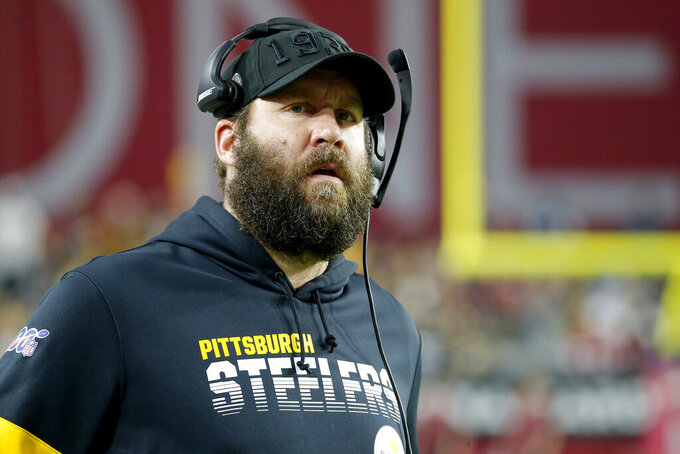 FILE - In this Dec. 8, 2019 file photo, Pittsburgh Steelers' Ben Roethlisberger watches from the sidelines during the second half of an NFL football game against the Arizona Cardinals in Glendale, Ariz. Roethlisberger is confident his surgically repaired right elbow will be fine in 2020. The two-time Super Bowl winning Pittsburgh Steelers quarterback missed most of 2019 after injuring the elbow in Week 2 against Seattle.(AP Photo/Rick Scuteri, File)

PITTSBURGH (AP) — Ben Roethlisberger is pretty sure there isn't a technical term for what doctors did to his shredded right elbow last fall.

The Pittsburgh Steelers quarterback is pretty sure about one thing though: no one who has ever played his position has ever recovered from it well enough to continue throwing a football for a living.

Yet the 38-year-old is confident he will be the first. Maybe it's because the pain that led to three flexor tendons rupturing late in the first half against Seattle last September is gone.

Maybe it's because he's leaner than he's been since his mid-20s. Maybe it's because he plays for a team with a defense that kept the Steelers in the playoff mix well into December without their longtime captain. It's likely a combination of all three.

Regardless, Roethlisberger believes he can be as good as ever entering his 17th season. After some informal throwing with his teammates during the spring when the COVID-19 pandemic turned organized team activities and minicamp into a “virtual” event, Roethlisberger spent Monday at Heinz Field doing it for real during the first extended work at training camp. The best part? The way he felt when he woke up Tuesday morning.

“I’ve had no setbacks,” he said. “It feels really good. I’m excited about that.”

Roethlisberger admitted he'd been dealing what he described as minor elbow discomfort for a while heading into Week 2 against Seattle. In the waning moments of the second quarter, he flung the ball deep to wide receiver JuJu Smith-Schuster. He clutched his arm immediately after letting it fly. Though he finished out the drive, it was obvious something was wrong. Really wrong.

“I just really felt a different pain, a different discomfort than I ever felt, and it was kind of shooting down my arm,” he said. "I knew something was different at that moment.”

He spent the second half standing mostly on his own on the sideline watching backup Mason Rudolph take over. The two-time Super Bowl winner underwent surgery shortly thereafter that “anchored” the torn tendons to his elbow.

For the first time since college, Roethlisberger found himself a spectator. Though he made an effort to mentor Rudolph and undrafted rookie free agent Devlin “Duck” Hodges, the view wasn't exactly appealing. It helped fuel his decision to come back rather than retire.

While Roethlisberger acknowledged the thought of walking away crossed his mind, but not long enough to matter. Like many athletes, he didn't want the lasting image of his final game to be of him standing stoically on the sideline with a baseball cap on and his right elbow under wraps. He likes to frequently point out he's played through the end of every contract he's ever signed, and there are two years (and nearly $70 million) left on the extension he agreed to in 2018.

“I’m not saying I’ve got 10 years left in me, but I feel like I’ve got some good years in me,” he said. “That was definitely the motivating factor — coming back, showing I still have it in the tank, that I have a lot to give this team, that I had a lot to give the fans."

The franchise seems to agree. The team used the draft and free agency to bolster an offense that finished near the bottom of the league in nearly every statistical category without Roethlisberger's familiar No. 7 under center. Tight end Eric Ebron gives him a big red-zone target. so does 6-foot-4 rookie wide receiver Chase Claypool. Veteran guard Stefan Wisnewski's arrival gives the line some experienced depth following Ramon Foster's retirement.

Throw in a defense that led the league in sacks and takeaways and remains very much intact in 2020, Roethlisberger believes the pieces are in place for Pittsburgh to return to the playoffs following a two-year absence. The biggest question mark is — ironically — the only player left from the group that won the Steelers' sixth Super Bowl following the 2008 season. He joked the only thing the team needs “is a quarterback now.”

The team will keep Roethlisberger on what he called a “pitch count” during training camp. It's led to a stunning realization: Roethlisberger actually misses the mundanity associated with the long, languid days of August and even the sometimes bothersome chore of preseason games. He found himself kind of pumped to get on the same field where his career was thrown into crisis 11 months ago, even if what amounts to “football in shorts” doesn't exactly replicate what awaits when the Steelers are scheduled to open at the New York Giants on Sept. 14.

New quarterback coach Matt Canada — who found himself watching Roethlisberger practice with regularity when Canada served as the offensive coordinator at the University of Pittsburgh, which shares a training facility with the Steelers — said Roethlisberger looks like he's always looked: sharp.

If Pittsburgh wants to make inroads in a division that features three quarterbacks — all of them Heisman Trophy winners, all of them 25 or younger — he'll have to be.

“I still want to win Lombardys," Roethlisberger said, referencing the trophy that goes to the Super Bowl champions. "And I say that with a plural on the end.”