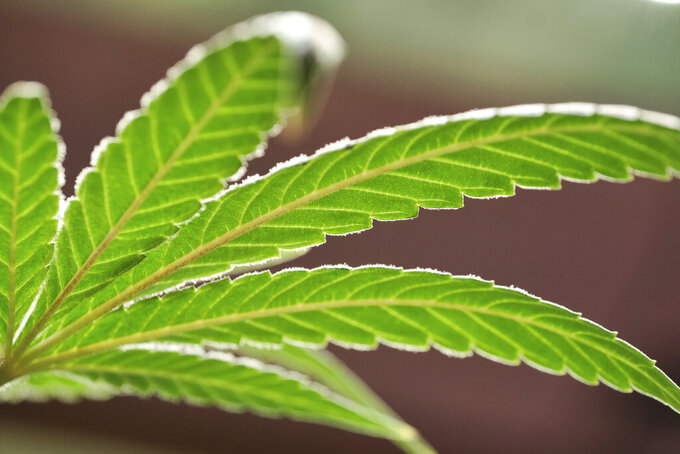 FILE - This May 20, 2019, file photo, shows a marijuana leaf on a plant at a cannabis grow in Gardena, Calif. Voters in four states could embrace broad legal marijuana sales on Election Day, setting the stage for a watershed year for the industry that could snowball into neighboring states as well as reshape policy on Capitol Hill. The Nov. 3, 2020, contests will take place in markedly different regions of the country, New Jersey, Arizona, South Dakota and Montana and approval of the proposals would highlight how public acceptance of cannabis is cutting across geography, demographics and the nation's deep political divide. (AP Photo/Richard Vogel, File) 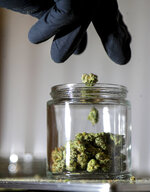 Voters in four states from different regions of the country could embrace broad legal marijuana sales on Election Day, and a sweep would highlight how public acceptance of cannabis is cutting across geography, demographics and the nation’s deep political divide.

The Nov. 3 contests in New Jersey, Arizona, South Dakota and Montana will shape policies in those states while the battle for control of Congress and the White House could determine whether marijuana remains illegal at the federal level.

Already, most Americans live in states where marijuana is legal in some form and 11 now have fully legalized the drug for adults — Alaska, California, Oregon, Washington, Nevada, Colorado, Michigan, Illinois, Massachusetts, Maine, and Vermont. It's also legal in Washington, D.C.

In conservative Mississippi, voters will consider competing ballot proposals that would legalize medicinal marijuana, which is allowed in 33 states.

Nick Kovacevich, CEO of KushCo Holdings, which supplies packaging, vape hardware and solvents for the industry, called the election “monumental" for the future of marijuana.

New Jersey, in particular, could prove a linchpin in the populous Northeast, leading New York and Pennsylvania toward broad legalization, he said.

“It’s laying out a domino effect ... that’s going to unlock the largest area of population behind the West Coast,” Kovacevich said.

The cannabis initiatives will draw voters to the polls who could influence other races, including the tight U.S. Senate battle in Arizona.

In Colorado, one supporter of legal cannabis could lose his seat. Republican Sen. Cory Gardner, who is struggling in an increasingly Democratic state where some in the industry have lost faith in his ability to get things done in Washington.

Despite the spread of legalization in states and a largely hands-off approach under President Donald Trump, the Republican-controlled Senate has blocked cannabis reform, so under federal law marijuana remains illegal and in the same class as heroin or LSD. That has discouraged major banks from doing business with marijuana businesses, which also were left out in the coronavirus relief packages.

“Change doesn’t come from Washington, but to Washington,” said Steve Hawkins, executive director of the Marijuana Policy Project. “States are sending a clear message to the federal government that their constituencies want to see cannabis legalization.”

The presidential election could also influence federal marijuana policy, though the issue has been largely forgotten in a campaign dominated by the pandemic, health care and the nation’s wounded economy.

Trump’s position remains somewhat opaque. He has said he is inclined to support bipartisan efforts to ease the U.S. ban on marijuana but hasn’t established a clear position on broader legalization. He’s appointed attorneys general who loath marijuana, but his administration has not launched crackdowns against businesses in states where pot is legal.

Joe Biden has said he would decriminalize — but not legalize — the use of marijuana, while expunging all prior cannabis use convictions and ending jail time for drug use alone. But legalization advocates recall with disgust that he was a leading Senate supporter of a 1994 crime bill that sent droves of minor drug offenders to prison.

Even if there are lingering doubts about Biden, the Democratic Party is clearly more welcoming to cannabis reform, especially its progressive wing. Vice presidential nominee and U.S. Sen. Kamala Harris of California has said making pot legal at the federal level is the “smart thing to do.”

Familiar arguments are playing out across the states.

Opponents fear children will be lured into use, roads will become drag strips for stoned drivers and widespread consumption will spike health care costs.

Those backing legalization point out the market is already here, though in many cases still thriving underground, and argue that products should be tested for safety. Legal sales would mean tax money for education and other services, and social-justice issues are also in play, after decades of enforcement during the war on drugs.

An added push this year could come from the virus-damaged economy — states are strapped for cash and legalized cannabis holds out the promise of a tax windfall. One Arizona estimate predicts $255 million a year would eventually flow for state and local governments, in Montana, $50 million.

Despite the pandemic and challenges including heavy taxes and regulation, marijuana sales are climbing. Arcview Market Research/BDSA expects U.S. sales to climb to $16.3 billion this year, up from $12.4 billion in 2019.

In New Jersey, voters are considering a constitutional amendment that would legalize marijuana use for people 21 and over. It's attracted broad support in voter surveys. If approved, it’s unclear when shops would open. The amendment also subjects cannabis to the state’s sales tax, and lets towns and cities add local taxes.

The Arizona measure known as Proposition 207 would let people 21 and older possess up to an ounce or a smaller quantity of concentrates, allow for sales at licensed retailers and for people to grow their own plants. Retail sales could start in May. State voters narrowly rejected a previous legalization effort in 2016.

If Montana voters approve, sales would start in 2022. Montana passed a medicinal marijuana law in 2004 and updated it in 2016. The proposed law would allow only owners of current medical marijuana businesses to apply for licenses to grow and sell marijuana for the broader marketplace for the first year.

Perhaps no other state epitomizes changing views more than solidly conservative South Dakota, which has some of the country's strictest drug laws.

The sparsely populated state could become the first to approve medicinal and adult-use marijuana at the same time. However, legalizing broad pot sales would be a jump for a state where lawmakers recently battled for nearly a year to legalize industrial hemp, a non-intoxicating cannabis plant.

Meanwhile, a confusing situation has unfolded in Mississippi, after more than 100,000 registered voters petitioned to put Initiative 65 on the ballot. It would allow patients to use medical marijuana to treat debilitating conditions, as certified by physicians. But legislators put an alternative on the ballot, which sponsors of the original proposal consider an attempt to scuttle their effort.

Hawkins is among those already looking toward 2021, when a new round of states could move toward legalization, including New York and New Mexico.

“There is clearly a tide,” Hawkins said. “We are moving toward a critical mass of states that ... will bring about the end of federal prohibition on cannabis.”