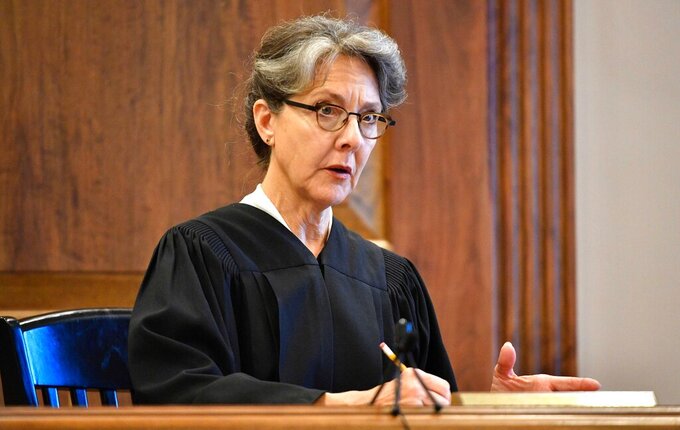 NASHVILLE, Tenn. (AP) — Tennessee’s elections coordinator helped Republican lawmakers as they crafted an effort to get rid of a judge who ruled last year to expand absentee voting, raising ethical concerns about separation of powers.

The behind-the-scenes involvement of the secretary of state’s office was detailed in emails obtained by The Associated Press through a public records request.

Elections Coordinator Mark Goins, who had been ordered by Davidson County Chancellor Ellen Hobbs Lyle to expand absentee voting because of the COVID-19 pandemic, sent a five-page memo outlining complaints against her to the ouster proposal's sponsor, Rep. Tim Rudd, and to Rep. Jeremy Faison, the House GOP Caucus chairman.

The memo, which Goins said he wrote for Rudd at the lawmaker's request, was sent a month before the resolution to remove the Nashville-based judge was publicly filed.

The resolution failed last week after critics called it an unprecedented breach of judicial independence. Prominent attorneys and the state and Nashville bar associations said it could leave judges worried their jobs might be in jeopardy ahead of controversial rulings.

But Steven Mulroy, a plaintiffs attorney in the case, said Goins shouldn't have been involved in the resolution, saying election officials are "supposed to be scrupulously apolitical and nonpartisan.”

Finding out they were "actively cooperating with legislators on this assault is even more concerning, if you care about the separation of powers,” Mulroy said.

Much of the resolution repeats complaints from Goins' memo. The resolution called for creating a House-Senate panel to make a recommendation on Lyle's removal. A two-thirds vote in each chamber would then have been needed to remove her. At one point, 67 of 73 House Republicans signed onto it.

According to the documents, Goins sent Rudd the memo in response to an email from the representative’s assistant, who wrote Jan. 20 that the lawmaker was “in need of verbiage and information for this resolution.” The next morning, Goins said he had a draft. The morning after that, he sent the memo.

“Chancellor Lyle issued numerous orders and expressed her opinion ranging from ordering ministerial checklists, destroying accurate election documents, using her specific language for instructions and websites, to challenging statutory language regarding voting fraud,” Goins wrote. “The practical effect was she became the de facto Coordinator of Elections when it came to voting by-mail.”

Through a law clerk, the judge declined to comment on Goins’ memo.

Rudd — chairman of a House elections subcommittee — said in a statement that he started the conversation that led to the memo, which was on official state letterhead.

Secretary of state spokesperson Julia Bruck said, “Chairman Rudd requested Coordinator Goins summarize the lawsuit activity and initiated the conversation. He did not draft a resolution or review a draft resolution.”

Goins' complaints are disputed by plaintiffs attorneys and Lyle, who have said state officials caused confusion by not following the judge's initial order, while counties continued to disseminate info that didn't reflect the ruling.

“You don’t want see judges or election officials tied up in the rough and tumble of politics," said Bannon, who heads the center's fair courts team. "It’s damaging for the rule of law and for public confidence in our system."

In Tennessee, election officials have closer links to lawmakers than most states. Goins works under the secretary of state, who is one of three chief elections leaders in the country picked by state lawmakers. Most are elected by the public.

Secretary of State Tre Hargett and Goins are both former GOP lawmakers.

In previous years, Rudd has been a sponsor of legislation brought forth by Hargett's office. When asked about the resolution recently, Hargett's office and Rudd offered similar written statements, both including the same quote about legislatures and election law authority by U.S. Supreme Court Justice Samuel Alito.

As the pandemic took hold, Tennessee elections officials said fear of COVID-19 was not a reason to vote by mail even as many other states expanded access amid concerns about the coronavirus spreading at crowded Election Day polling places.

When two lawsuits were later filed, Lyle ruled Tennessee must offer widespread absentee voting amid the pandemic, and it did for the Aug. 6 primary. The state Supreme Court overruled her and restored the requirement of an excuse for absentee voting for November, but only after the state promised for the first time that people could vote absentee if they believed they or someone in their care faced a higher risk of COVID-19.

Saying the state promised even more to the high court, Lyle later extended that ruling to voters whose household included someone with an underlying health condition.

Amid the legal turmoil, Attorney General Herbert Slatery issued a rare rebuke, saying the expansion was “another court decision replacing legislation passed by the people’s elected officials with its own judgment.”

Days later, Lyle said “shame on you” to Tennessee officials who held off on sending coronavirus-related absentee applications for hours after her initial ruling and rewrote the applications without her instruction. She warned of the “specter of criminal contempt” if the state didn’t follow future orders.

Lyle's shaming comments stuck with Goins, who mentioned it twice in his memo. He alleged Lyle's “tone and questioning is considerably different between the different parties” during the court hearings.

“Chancellor publicly chastised defendants saying, ‘Shame on You’ and threatened criminal contempt," Goins wrote. "However, Chancellor Lyle did not ‘shame’ or ‘threaten to hold in contempt’ the multiple plaintiffs who voted in-person even though they signed a verified complaint under oath in her court saying they did not want to risk their health by voting in-person and needed to vote by mail."

Lyle, appointed in 1995 by Republican Gov. Don Sundquist, is up for reelection in August 2022.