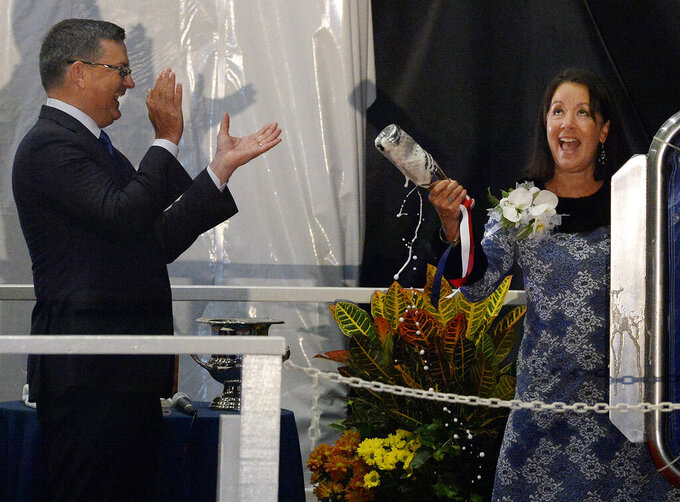 FILE - In this Oct. 5, 2019 file photo, Kevin Graney, president of General Dynamics Electric Boat applauds as Dana Richardson breaks a champaign bottle on the second try during the christening ceremony for the U.S. Navy's newest attack submarine at Electric Boat shipyard in Groton, Conn. On Saturday, April 4, 2020, Graney told Electric Boat employees that he has tested positive for the new coronavirus. Graney got the results of his test the night before. (Dana Jensen/The Day via AP, File)

HARTFORD, Conn. (AP) — The president of submarine builder Electric Boat, which has major production plants in Connecticut and Rhode Island, told employees on Saturday that he has tested positive for the new coronavirus.

Kevin Graney said in a statement that he got his test result Friday night, after developing a low-grade fever overnight Wednesday into Thursday. His office is at the Groton, Connecticut, headquarters, where he last worked Wednesday.

“My symptoms remain mild — some nasal congestion and a low grade fever," the statement said. "I will be out of the plant until I am cleared by medical to return.”

Electric Boat, a division of General Dynamics, produces nuclear submarines for the Navy, with key manufacturing operations in Groton and Quonset Point, Rhode Island. It employs around 17,000 people. Graney said his office and surrounding areas are being cleaned and people he had close contact with have been notified.

Graney said Friday that six workers at Electric Boat had tested positive for COVID-19. They include employees in Groton, Quonset Point and a facility in Charleston, South Carolina.

In other developments related to the coronavirus outbreak in Connecticut:

Gov. Ned Lamont said Saturday that 5,276 state residents have tested positive for COVID-19 and 165 people have died from the disease. About 1,033 patients have been hospitalized.

Unions representing more than 6,000 employees in the state's prison system are demanding an immediate increase in protective equipment as well as stronger safety protocols to protect staff, inmates and the public during the coronavirus outbreak.

Leaders of three locals of the American Federation of State, County and Municipal Employees said in a statement that prison staff face severe shortages of protective equipment, including masks, and medical equipment, as COVD-19 cases increase in the prison system.

The Department of Correction reports that 19 staff members and 11 inmates at several prisons have tested positive for COVID-19.

The department said in a statement that all of its facilities have supplies of N95 and surgical masks. Agency officials said more than 100 prison Emergency Response Team members were fitted with N95 masks this past week, and a total of more than 17,000 surgical masks were delivered to all 14 facilities last month.

Connecticut schools have served more than 1 million meals to children 18 years and younger since Lamont canceled classes statewide last month in response to the coronovirus, the governor announced Saturday.

The meals are being served under an emergency program of the state Department of Education aimed at ensuring children in low-income families do not go hungry. A total of 128 school districts are serving meals at more than 400 locations.

An investigation is continuing into the cause of death for a 6-week-old infant in Hartford who tested positive for the virus in a postmortem exam.

Dr. James Gill, the state’s chief medical examiner, has said numerous tests will be necessary. He said the baby had no other known medical conditions.

A preliminary police investigation, which is routine for all untimely deaths, included interviews with family members and found no signs of trauma, the Hartford Courant reported.

Lamont announced on Wednesday that the baby had died and tested positive for COVID-19.

Lamont and nonprofit organizations are urging members of the public to volunteer in the state's response to the coronavirus outbreak.

The governor said the state has launched a campaign seeking volunteers for a variety of services including food banks and deliveries to the elderly and homeless shelters. The effort is in addition to a call for volunteers with health care experience to help with medical services.

“During times like this, it is critical that we come together as a community — as a family — and support our neighbors in this response effort,” Lamont said.

Volunteers must be 18 or older and must not have COVID-19 symptoms or live with or care for anyone who has symptoms or a compromised immune system. Information on how to register for volunteering is available on the state's coronavirus webpage.

A Connecticut couple who had been married for more than 40 years died only days apart from complications due to COVID-19, relatives said.

"It was the roughest thing in the world,” said their son, Ja-Asia Baker. “To not be able to visit them, to not be able to see them in person one last time, it was terrible.”

Ja-Asia Baker and his sister last saw their parents on a computer screen via a video chat Sunday arranged by hospital staff. Their parents were sedated and on ventilators as their children told them they loved them.