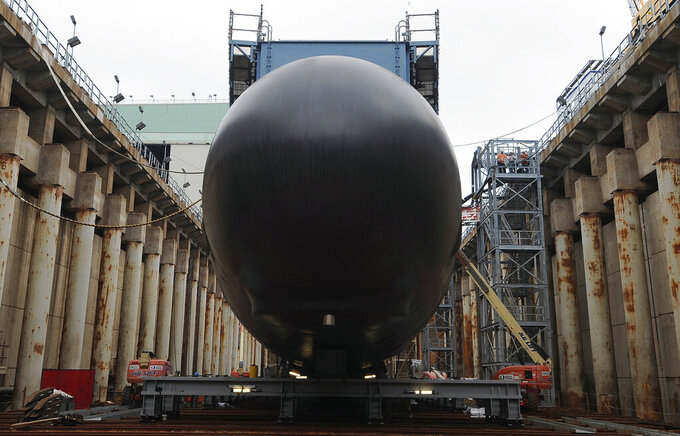 FILE- In this July 30, 2015, file photo, shipyard workers work at General Dynamics Electric Boat in Groton, Conn., prepare a submarine for float-off. Connecticut and Rhode Island officials are celebrating a new submarine contract for General Dynamics Electric Boat as a major economic win for the region's economy. The  $9.47 billion contract with the U.S. Navy, which was announced Friday, Nov. 6, 2020, is for construction and testing of the first two Columbia-class submarines. AP Photo/Jessica Hill, File)

General Dynamics Electric Boat, the Connecticut-based builder of U.S. Navy submarines, is encouraging more people to work from home as it contends with a surge in coronavirus infections among its workforce.

A total of 404 infections have been reported among Electric Boat staff, including 170 in the three weeks leading up to Nov. 13. The Groton-based company employs about 12,000 people in Connecticut, 4,000 in Rhode Island and a small number at shipyards elsewhere in the U.S.

“We like the community are seeing an uptick in infections,” company spokesperson Liz Power said. She said the company has added sanitizing stations, conducted aggressive contact tracing and expanded the ability to work from home for workers who do not have to be in the shipyards.

Electric Boat president Kevin Graney, who contracted COVID-19 himself in April, addressed the increase in a recent podcast for employees.

“I'm very concerned about this trend as I know you are,” Graney said, according to The Providence Journal. "We understand that cases are rising in the community and that means that we cannot let our guard down — we must adhere to all of the measures we've been taking for the last several months.

In other virus developments in Connecticut:

The organization that oversees high school sports in Connecticut has decided to postpone the start of its winter sports season until mid-January at the earliest amid a statewide surge in coronavirus cases.

The Connecticut Interscholastic Athletic Conference made the announcement Tuesday following a vote by its Board of Control.

Under the board's plan, practices for winter sports, which include basketball, hockey, indoor track, swimming, wrestling and cheer and dance, would begin on Jan. 19, 2021.

“We think it’s a reasonable date where we can understand where we are in terms of getting through the holidays, and how our schools are impacted over the next couple of month,” CIAC Executive Director Glenn Lungarini said.

Practices had been scheduled to begin next week, with games starting on Dec. 7.

The postponement comes after Gov. Ned Lamont's office earlier this month banned the playing of high-risk youth sports such as wrestling for the remainder of 2020.

The governor, acting on the advice of state health officials, said medium-risk sports, such as basketball and hockey could be played only with participants wearing masks to prevent the spread of the virus.

The CIAC said it will continue to collaborate with the state Department of Public Health, the governor's office and the state medical society’s Committee on the Medical Aspects of Sports as it prepares for the Jan. 19 start of winter practices.

“I think we need to go back to some sort of Phase One, which includes not having indoor dining,” Elicker said Tuesday.

Lamont has capped private gatherings at 10 people and required restaurants to close by 10 p.m. but has said he has no plans for a broader shutdown.

Lamont's office said the number of people hospitalized in Connecticut with COVID-19 increased by 20 on Tuesday to 777. There were 12 additional deaths linked to the virus, bringing the total for the pandemic to 4,771.

The seven-day rolling average for Connecticut's coronavirus positivity rate has risen over the past two weeks from 3.6% on Nov. 2 to 5.53% on Nov. 16. State health departments are calculating positivity rates differently across the country, but for Connecticut the AP calculates the rate by dividing new cases by test specimens using data from The COVID Tracking Project.