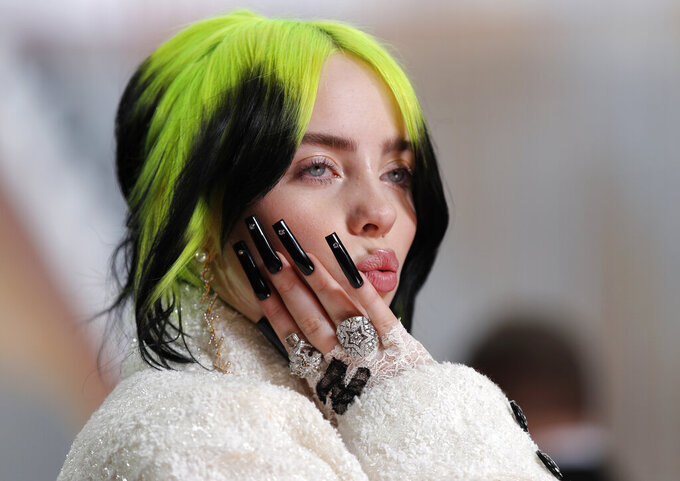 FILE - In this Feb. 9, 2020 file photo, singer Billie Eilish arrives at the Oscars in Los Angeles. The Elton John-led starry benefit concert that featured Eilish, Mariah Carey and Alicia Keys on Sunday has raised nearly $8 million to battle the coronavirus. The musicians performed from their homes for the hour-long event that aired on Fox and iHeartMedia radio stations. Fox will re-broadcast the concert on Monday, April 6. (AP Photo/John Locher, File)

An Elton John-led, star-studded benefit concert that raised more than $10 million to battle the coronavirus will be re-aired on Fox next week.

Billie Eilish, Mariah Carey and Alicia Keys will be shown performing from their homes on “Fox Presents the iHeart Living Room Concert for America,” which will air Monday. The money will go to Feeding America and First Responders Children’s Foundation.

Other performers include Tim McGraw, H.E.R. and Sam Smith, who sang “How Do You Sleep” in a cappella form. Dave Grohl sang “My Hero” from his studio in Hawaii, Green Day’s Billie Joe Armstrong strummed his guitar to “Boulevard of Broken Dreams,” while Camila Cabello sang “My Oh My” from Miami with a guitar assist from beau Shawn Mendes.

Lady Gaga, Lizzo, Ellen DeGeneres and Ryan Seacrest paid tribute to those combating the spread of the virus.

The Academy of Motion Pictures Arts and Sciences is giving $6 million to help film industry employees out of work due to the coronavirus pandemic.

The film academy, which puts on the annual Academy Awards, said Friday that it will donate $2 million to the Actors Fund, which supports performers and behind-the-scenes workers; $2 million to the Motion Picture & Television Fund, the long-running nonprofit offering relief to members of the entertainment community in need; and $2 million to the Academy Foundation, its own charitable arm.

“As we face a pandemic, it’s incumbent upon us to help those in the motion picture community who are suffering,” said David Rubin, academy president, said in a statement. “The shutting down of productions, businesses and theaters has had devastating consequences. By contributing financially to The Actors Fund, MPTF, and the Academy Foundation’s wonderful grants program, we can help provide our extended family with desperately needed assistance.”

The South Korean capital of Seoul says it will ask more than 8,500 theatergoers to self-monitor at home after Canadian and American cast members of “The Phantom of the Opera” were found to have the coronavirus.

Seoul City official Na Baek-ju said Friday the musical’s international tour was halted following the positive test of an unidentified Canadian actress, who began experiencing throat pain and dry coughs days after she began performing at the city’s Blue Square theater on March 14. She last appeared on stage on Monday, a day before her test.

Officials have since tested 138 of her contacts, including colleagues and guests at the downtown Somerset Palace hotel, and confirmed the infection of an American actor on Thursday.

Na said officials were still awaiting test results for 48 people while the other 89 tested negative.

He said the hotel was ordered to prevent guests from leaving the property and stop taking new customers.

South Korea earlier on Friday reported 86 new cases of the coronavirus, bringing its nationwide total to 10,062.

While the country’s caseload has slowed from early March when officials reported around 500 new cases per day, there’s concern over a steady rise in infections in the densely populated Seoul metropolitan area, where about half of the country’s 51 million people live.