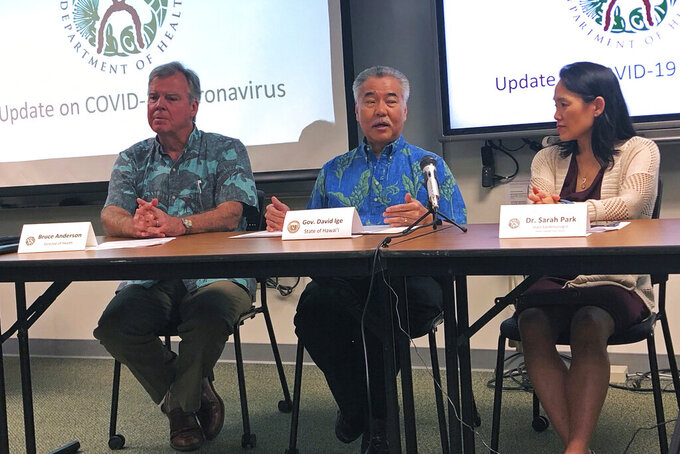 In this Feb. 14, 2020, file photo Hawaii Gov. David Ige, center, state Health Director Bruce Anderson, left, and state Epidemiologist Sarah Park, right, in Honolulu discuss a tourist who was confirmed with the coronavirus after returning home to Japan. A review of Ige's emails shows the state epidemiologist spent key weeks in the early days of the coronavirus pandemic resisting suggestions and requests from both inside and outside the administration that she boost contract tracing to control the spread of COVID-19. (AP Photo/Jennifer Sinco Kelleher, File)

HONOLULU (AP) — A review of Hawaii Gov. David Ige’s emails shows the state epidemiologist spent key weeks in the early days of the coronavirus pandemic resisting suggestions and requests from both inside and outside the administration that she boost contact tracing to control the spread of COVID-19.

They also showed Dr. Sarah Park repeatedly telling her superiors that the state's failure to adequately fund and staff the division she headed was preventing her from quickly expanding their work to respond to the crisis.

Park left the department at the end of 2020 after spending more than three months on paid leave. Attempts to reach her for comment were not successful.

The Associated Press obtained the emails a year after a May 2020 request submitted under Hawaii's open records law. The emails underscored the strain on the Ige administration as it scrambled to address a pandemic that overwhelmed states across the country.

Contact tracing was especially difficult for many states. The effort aims to alert people who may have been exposed to someone with the coronavirus and prevent them from spreading it to others. Health experts say it's key to containing the virus.

The governor's records show that University of Hawaii President David Lassner emailed administration officials on April 16, 2020, to say university researchers had written a report about the need to boost contact tracing and other steps to control COVID-19.

Park didn't outright reject more contact tracing but replied: “I am increasingly disturbed that people seem to think contact tracing is somehow easily accomplished as a simple task when it is a part of the practice of applied epidemiology.”

Lassner offered to have the university help train contact tracers.

Two days later, Ige's chief of staff, Linda Takayama, asked whether the state could do “a full court press” on contact tracing. She noted Hawaii had set up sites to process a flood of pandemic-induced unemployment insurance claims and wondered whether something similar could be done for contact tracing.

“We are standing by to help,” Takayama wrote.

Park replied, “we’re OK” when it comes to contact tracing “at the current disease activity level.” That day, Hawaii’s seven-day average of new infections was only 10.

“However, if disease activity spikes, we will be challenged,” Park wrote.

She said she would start using online software that would decrease the burden on her staff and bring on more volunteers and staff as needed. Park added she could better expand her operation if the state hadn’t failed to properly fund public health.

“There’s a lot of focus on contact tracing, but really the issue for us and all of public health (i.e., in other jurisdictions as well) is that all of us are chronically understaffed even in routine times, given limited funds and, especially here, less than competitive salaries. If we were all appropriately resourced and staffed (not just my programs but also other areas of DOH), we could more readily surge, especially by reassigning particular positions toward the response,” she wrote.

Park said the state also needed public health education and community outreach, especially to vulnerable populations. She didn’t mention any particular groups, but COVID-19 was surging among Pacific Islanders at the time.

She wrote she had no public health educator on staff and epidemiologists had to develop educational materials and infographics “in their ‘spare’ time.”

About a month later, Park asked the House Finance Committee to fund a University of Hawaii program that would train 200 people in contact tracing. In testimony on May 12, she said each worker would be capable of monitoring 20 people per day using phone calls and a cellphone app. Together, the new trainees could track 4,000 people, she said.

The caseload for contact tracers at that point was not high: The Health Department reported just one new positive case the day Park spoke to the House committee.

But lawmakers were eager to bring in more. An aide to the Senate president emailed the attorney general saying best practices dictated 30 contact tracers for every 100,000 people. Hawaii would need 450 contact tracers under that guideline.

On Aug. 7, senators made an unannounced visit to Park’s office with a Hawaii News Now camera crew in tow. One investigator told a senator she had 131 cases to keep track of and another said he had 192.

Park told the TV crew she was glad the senators visited and said she hoped they saw the department needed more staffing, resources, space and equipment. She said it wasn’t easy to bring in more contact tracers because they needed to be trained in the specific work her disease outbreak control division was doing.

But emails showed many in the administration were alarmed. Attorney General Clare Connors sent Ige an email with the subject line “DOH Ambush,” saying she drafted a letter for him to send to the Senate president.

Takayama lamented that the senators missed the bigger picture, including contact tracers working from home, the inspectors who were out in the field and examiners “working the files.” Park herself expressed concerns that the senators and news media entered her office despite the presence of a security guard.

The following week, a Health Department whistleblower held a news conference with then-U.S. Rep. Tulsi Gabbard saying contact tracers were struggling to keep up with their caseloads. Gabbard called for the firing of Park as well as Health Director Bruce Anderson.

By late August, the emails got more tense.

Ige emailed Anderson on Aug. 21 telling him to immediately create reports about the pandemic for the Legislature and the Hawaii Emergency Management Agency.

“These reports have been requested multiple times and the (Disease Outbreak Control Division) has, thus far, not produced the data and/or reports as requested,” the governor wrote.

Park replied to Ige and Anderson that she couldn't “flog” her investigators to do more.

A week later, Anderson announced he would retire in mid-September. On Sept. 4, Park was placed on paid leave. She left the department on Dec. 31.

The governor’s office provided the emails so long after they were requested in part because Ige issued an emergency proclamation in March 2020 suspending the state’s three-decades-old open records law, citing the pandemic. He later modified it to suspend deadlines in some circumstances.

The initial blanket suspension amounted to most extreme restrictions on the public’s access to official records in the United States during the pandemic. The state's open records law aims to protect the public interest by exposing government to scrutiny.