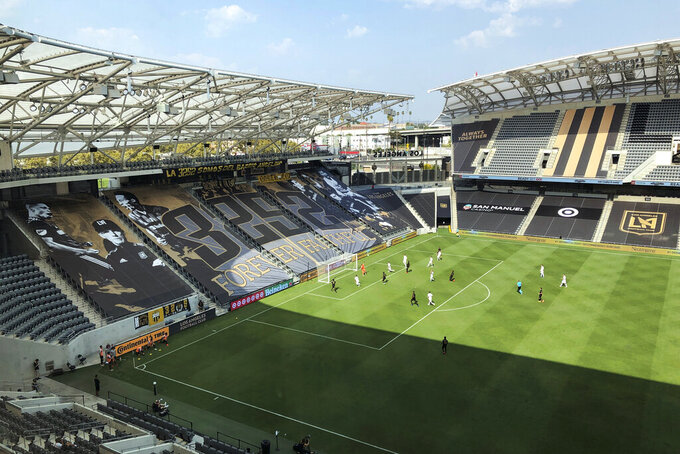 Los Angeles FC and the LA Galaxy play the eighth edition of their rivalry game, El Trafico, at Banc of California Stadium on Saturday, Aug. 22, 2020, in Los Angeles. The game was played behind closed doors as Major League Soccer returns in empty stadiums this week, depriving the rivalry of the energy derived from the clubs’ passionate fan bases. The Galaxy won 2-0. (AP Photo/Greg Beacham)

At this point, a falconer usually emerges from a tunnel and sends Olly, LAFC's red-naped shaheen, soaring and swooping over the fans' heads before landing on the green grass.

Instead, the only bird in sight was a green parrot watching alongside a young LAFC supporter amid the bank of virtual fans on the video boards above the empty stands.

The eighth edition of the El Tráfico rivalry was like nothing ever seen at this downtown edifice, which has been a North American soccer hotbed since LAFC opened it just 2 1/2 years ago. Although the stadium maintained part of its usual pregame pomp and ceremony before Major League Soccer's latest restart, no fans and no falcons were allowed inside, leaving the league's most tantalizing rivalry lacking a key element in its success.

When the Galaxy walked off 90 minutes later with a 2-0 victory — their first win of the season and the franchise's first at their rival's home park — Jonathan Dos Santos recognized the unique nature of the achievement.

“This win is for the fans that I know were watching us from their homes,” the Galaxy midfielder said. “It’s weird, because we’ve never had this experience playing without fans. But we knew the fans were watching us. We knew that this game was really important for us, and I’m proud of my team. It’s a new experience playing without fans, but I think everything depends on us.”

Fans across the continent, including the 3,252 who pack the North End of LAFC's stadium for every game, were absent when MLS returned to action this week, thanks to the coronavirus pandemic.

Not many even showed up to be near Banc of California Stadium on game day, heeding LAFC's admonitions to watch from home. Artful banners covered the seats typically taken up by singing, dancing supporters reveling in this young club's festive home atmosphere.

The public address system was cranked up to levels that seemed deafening without the buffering presence of fans’ bodies and voices. When the game began, the stadium kept the same volume for its artificial crowd noise, which included the LAFC 3252′s signature chants and songs.

Both teams said the piped-in crowd noise didn't affect them much in either direction.

“It wasn’t so bad, to be honest,”Galaxy veteran Sebastian Lletget said. “It gave it a little bit of noise, a little bit of edge. But we were so focused in on the game, so zoned in, that we didn’t really notice it.”

In keeping with LAFC fans’ tradition, the fake crowd volume even stayed the same when the Galaxy’s Ethan Zubak opened the scoring with his first MLS goal in the first half. The North End fans never stop making noise, and neither did the recorded sound.

“We will miss our fans and all the atmosphere they create for this game in particular,” said LAFC’s Carlos Vela, who left in the second half with an apparent injury in his first competitive game since March. “But this is the new life. We have to be ready. We still have to put on a good show for our fans, because for sure they’ll be watching at their house.”

El Tráfico immediately became one of the most exciting things in North American soccer thanks to the heroics of Vela and the Galaxy’s Zlatan Ibrahimovic, who traded jaw-dropping goals in a series of thrilling clashes over the past two MLS seasons. The five-time MLS champion Galaxy haven’t matched LAFC’s immediate success over the past two years, but they went unbeaten in the first five editions of this rivalry before LAFC finally broke through last October with an emphatic 5-3 playoff victory.

Ibrahimovic is gone, and his replacement, Javier “Chicharito” Hernández, is still recovering from an injury that kept him out Saturday. The Galaxy went winless in their first five games this season, dropping into last place in the Western Conference and already adding an element of desperation to every game.

That desperation showed up on the field in the first shutout victory ever posted in El Tráfico.

“It meant even more to us,” Lletget said. “Of course you want to beat your rival, but we just wanted to get our first win. And to get a shutout, it’s a testament to our effort and our organization.”

These rivals are meeting three times in a seven-week span, with the third game at the Galaxy's home stadium in Carson on Sept. 6. The seventh edition of this rivalry was uniquely weird in its own right: The teams met in Florida last month at the MLS Is Back tournament, and LAFC demolished its rivals 6-2 even without Vela, who stayed home for family reasons.

“Of course it will be a really strange year,” Vela said. “We don’t know exactly how we will finish the season, or even if we finish the season. We are ready for everything. We’re training hard because we feel we’re so close to get a trophy for our club. If the league is playing a full season, it will be a good opportunity for us, and we’ll be fighting and working for a trophy.”