End around: Browns' Garrett goes from villain to Man of Year 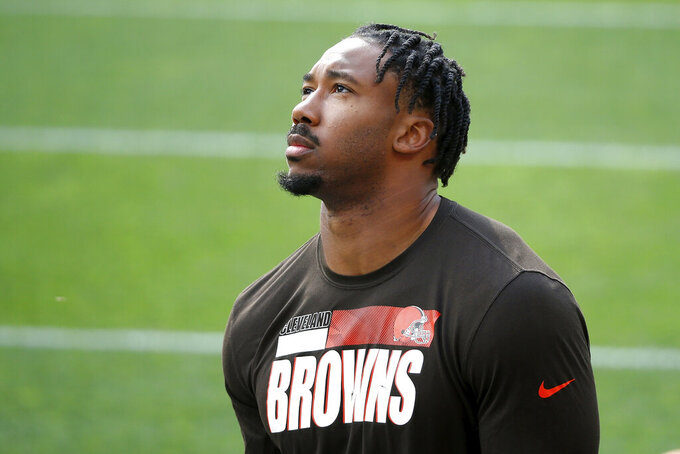 Cleveland Browns defensive end Myles Garrett (95) walks on the field prior to the start of an NFL football game against the Indianapolis Colts, Sunday, Oct. 11, 2020, in Cleveland. Garrett was playing as well as any defender in the league when he fell ill and went on the COVID list after a positive test on Nov. 20. He missed Cleveland's past two games _ wins over Philadelphia and Jacksonville _ while isolating and recovering at home.(AP Photo/Kirk Irwin)

One regrettable, violent moment nearly changed everything for Myles Garrett.

He wouldn't let it.

Suspended, disgraced and branded a villain for his helmet-swinging attack on Steelers quarterback Mason Rudolph in the closing seconds of a nationally televised game last year, Garrett found his playing career at a crossroads. He considered quitting.

However, he pushed on and persevered. Garrett turned his story around.

The Browns' star defensive end on Thursday was named the team's Walter Payton Man of the Year, which annually recognizes the NFL’s best players for their excellence on the field and dedication to community service.

“It was never going to deter me or shake my spirit or take me off the path I’ve been on and I was going to go,” Garrett said of the incident with Rudolph, which resulted in a six-game league ban. “I’ve always wanted to do these kinds of things and nothing is going to change that.”

In addition to being one of the game's best defenders, Garrett is also a high-profile ambassador for several charitable causes, serving as the active player captain for Waterboys, an organization focused on bringing clean water to communities in East Africa.

He's made an equally significant impact at home. This summer, he reached out to victims of police brutality and their families, and Garrett covered the funeral costs for David McAtee, a barbecue restaurant owner in Louisville, Kentucky, who was shot and killed during protests.

In Cleveland, Garrett teamed up with Cleveland Hope Exchange and local businesses to provide more than 24,000 pounds of food and additional resources to those affected by COVID-19 pandemic.

Powerful and unrelenting on the field. Caring and kind off it.

“Myles has a great heart," Browns quarterback Baker Mayfield said. "If people questioned it because of one action last year, then shame on them because you can learn from mistakes, as I personally know very well. Myles is a great guy. He has been doing things for a lot of people around the world for a while. That just shows his character and his heart.

"He is obviously a great representation of this franchise.”

The Browns stood by Garrett in the aftermath of the Rudolph incident — he claimed the QB used a racial slur — and suspension. The team never wavered in its belief in Garrett and signed him to a five-year, $125 million contract extension in July.

“Myles, from the moment I have been with him, has been a team player all of the way,” Stefanski said. “And obviously a very high-caliber player. Off of the field, he is very conscientious. He wants to make an impact in this community and really around the country and around the world. He has done an exemplary job at that.”

Garrett credits his family, a “pretty small circle” of friends and teammates with helping him cope during a difficult period following the event with Rudolph.

It's not that he's been trying to make amends over the past year or prove anything to anyone. This wasn't an attempt to rehabilitate his name or standing, or convince people he wasn't vicious.

This was simply Garrett being himself while following the legacy of Payton, the late Chicago Bears Hall of Fame running back for whom the award is named.

“To me, this has nothing to do with what happened last year," said Garrett, who played last week after missing two games with COVID-19.

He's humbled to be singled out by the Browns for his efforts, and he plans to keep serving others.

"I am just trying to do that.”