England without injured Jason Roy for T20s against Pakistan 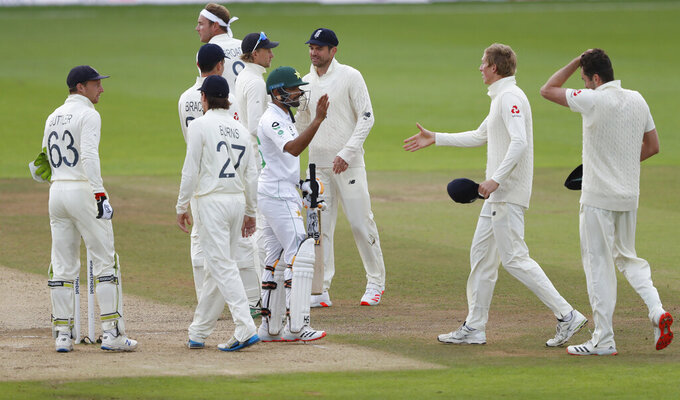 MANCHESTER, England (AP) — England will be without one of its most explosive batsmen for the upcoming Twenty20 series against Pakistan after Jason Roy was ruled out of all three matches because of a left side strain.

The opener was hurt during practice at Old Trafford on Tuesday, and a scan on Wednesday revealed the injury.

Roy will remain with the England squad and look to recover in time for the white-ball series against Australia in Southampton starting Sept. 4 with the first of three T20s.

England captain Eoin Morgan said no player will come in as a replacement for Roy ahead of the first T20 against Pakistan on Friday.

“Given that we have a lot of flexibility, particularly with our allrounders in Joe Denly, Moeen Ali and our batters that we have in the squad, we don’t feel a need to pull anybody in,” Morgan said on a video call on Thursday.

“At the moment we don’t anticipate it being anything serious (for Roy) but we want to give him every chance to be fit for Australia for both series, the T20s and 50-over. We will see how he progresses over the next three or four days."

No players who were involved in the recent test series against Pakistan will play for England in the T20 games, with the test and white ball squads being in different bio-secure bubbles.

The T20 World Cup, scheduled for October and November in Australia, was postponed because of the coronavirus outbreak so Morgan has 15 months — until the next one, taking place in India — to assess his players.

“This is another opportunity for guys who would potentially sit outside the (strongest) 15 to try and present their best case moving forward for winter tours and the World Cup next year,” Morgan said. “I also think that opportunities like this don’t come around very often, when we have our squad at full strength.”

Morgan said there were still some areas in the team that needed strengthening because players didn't know their defined roles.

“I don’t think we can have a scenario,” Morgan said, “where we can play the majority of our games with a half-strength team and then expect to go into a World Cup as contenders when guys don’t know their roles or haven’t been familiarized with them.”

The other T20 games against Pakistan are on Sunday and Tuesday.