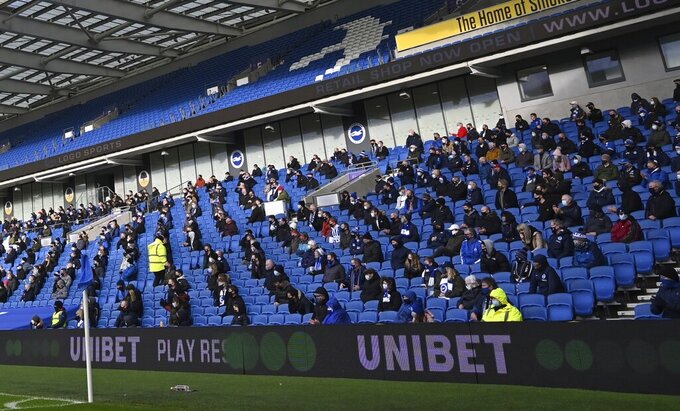 Fans, wearing a face mask, for covering due to the COVID-19 pandemic, sit socially distanced during the English Premier League soccer match between Brighton and Hove Albion and Sheffield United at the American Express Community Stadium in Brighton, England, Saturday, Dec. 20, 2020. (Glyn Kirk/Pool via AP)

IPSWICH, England (AP) — English soccer would benefit from being briefly suspended as more clubs are hit by COVID-19 outbreaks, including the new variant strain, a team’s medical staff member said on Tuesday.

Matt Byard, the physiotherapist at third-tier side Ipswich, voiced his concern after his club’s training ground was forced to be closed after five players, the coach and the general manager of football operations tested positive for the coronavirus.

Byard said the speed of the transmission and the “data and symptom profile” confirms the cases at the club were the new strain of the virus, which has been detected mainly in London and the southeast of England and has sparked concern worldwide because of signs that it may spread more easily.

While there is no indication it causes more serious illness, numerous countries in Europe and beyond have restricted travel from Britain as a result.

“We have been complimented by the English Football League for the procedures we have had in place at the training ground and on matchday — and that is one of the reasons they have become very concerned over the latest developments,” Byard said.

“I know the EFL are looking at bringing in extra measures, with maybe more testing for example. I have always supported routine testing to secure a return-to-playing programme. Personally, with so many clubs affected by this presently and this new strain development, football may benefit from a ‘circuit breaker’ before a return to playing securely.”

Soccer continues in England over the festive period, as is the tradition, and Ipswich has canceled matches the team was due to play on Dec. 26 and 29.

In the Premier League, Newcastle had to cancel its match against Aston Villa this month after an outbreak of the virus among its squad. Newcastle manager Steve Bruce said two of his players, reportedly Allan Saint-Maximin and captain Jamaal Lascelles, suffered “damaging effects” of the virus and were “struggling for a while with it.”

“We will be retesting all the staff on Wednesday who have previously tested negative and I do have concerns that there will be more positive cases,” Byard said.