English spinners get ultimate test in series against India 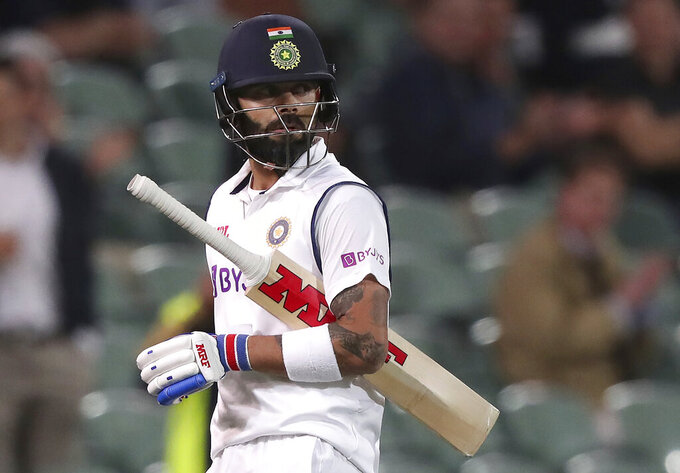 FILE - In this file photo dated Thursday, Dec. 17, 2020, India's Virat Kohli walks off after he was run-out by Australia for 74 runs during their cricket test match at the Adelaide Oval in Adelaide, Australia. A four-match test series between England and India begins Friday Feb. 5, 2021, with England’s spin bowlers facing off against an intimidating Indian batting lineup featuring Virat Kohli, who is available again. (AP Photo/James Elsby, FILE) 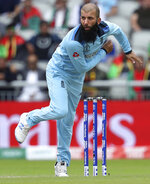 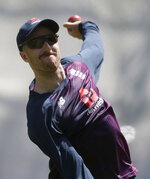 England's spinners had a satisfying workout on the subcontinent when they played starring roles in a test series win in Sri Lanka last month.

Now for the real test: bringing down a full-strength India.

A four-match test series between two of the world's leading cricket nations begins Friday, with the outcome potentially dependent on the performance of England's spin bowlers — Jack Leach, Dom Bess and the returning Moeen Ali — against an intimidating Indian batting lineup featuring Virat Kohli, who is available again following the birth of his daughter.

The English returned to Sri Lanka for a test series that was postponed for nearly a year because of the coronavirus pandemic and won 2-0 largely thanks to the wickets of Leach (12) and Bess (10).

There was definitely an element of luck involved as the Sri Lankan batsmen seldom put a price on their wickets. While these weren’t career best returns — Leach, for example, picked up 18 wickets during England’s 3-0 win in Sri Lanka in 2018 — it was one of the better displays by English spinners in this part of the world in recent years.

Ali wound up missing the series after contracting the coronavirus.

The English spin trio, bolstered by captain Joe Root’s handy part-time spin duties, will have their work cut out, though, against an India team coming off a stunning 2-1 series win in Australia.

It is a first visit to India for both Leach and Bess. Along with the rest of the English squad, they spent six days in Chennai inside the bio-bubble — as per local travel protocols — and Leach spent his time watching videos of Graeme Swann and Monty Panesar from the 2012 series in India, when England registered a shock 2-1 win. Swann and Panesar shared 37 wickets.

“They are two bowlers I love to watch,” he said. “I watch a lot of spin videos and try to take things for everyone I watch.

“Monty bowled an amazing pace. For me, it's knowing what my optimum pace is, and going up and down a little from there. But trying to get as much energy on the ball and deceive them that way. Everyone has an optimum pace and I think it’s important to try and stick to that as much as possible.”

English spinners were presented with friendly tracks in that 2012 series, which eventually cost the hosts. That mistake was rectified in 2016-17, when India won the five-test series 4-0 on flatter wickets.

Legspinner Adil Rashid did pick 23 wickets but he lacked support as India's batsmen ran amok, including a triple-hundred from Karun Nair in Chennai. It was only Nair’s third test and he hasn’t featured for India in international cricket since 2017.

Nair’s example demonstrated how Indian batsmen are fed on a staple diet of spin bowling, beginning from junior cricket. Undeterred on home pitches, they have a propensity to attack visiting spinners and get on top. This strategy worked recently in Australia, too, where Nathan Lyon was rendered ineffective. He picked up only nine wickets in the four tests.

At times, though, Indian batsmen have also shown a weakness against offspin. Swann’s success in India in 2012 and Ali’s success in England in 2014 are examples. Whether Ali and Bess can replicate similar control and incisiveness in the upcoming contest remains to be seen.

Much will depend on how England intends to use their spinners. Will Root give them an attacking role, as in Sri Lanka, or will they play second fiddle to pacers James Anderson, Stuart Broad, Chris Woakes and Jofra Archer?

Leach’s persistent line and length is seen as strength in sub-continental conditions. Bess’ bowling speed is ideal for Indian conditions, although he lacks control as compared to Swann. Ali has the experience of 60 tests.

Meanwhile, the BCCI has given an informal nod to allow spectators for the second test starting Feb. 13, also in Chennai.

A pre-series decision was taken to hold the series behind closed doors. However, the drastic reduction in the number of active COVID-19 cases across the country led to the Indian government’s decision on Jan. 30 to allow fans back at sports events.

The traveling party has so far acknowledged this development. The BCCI, however, is still cautious, with only 50% crowd expected for the second test.

There has been no official communication in this regard from the parent body. However, the host in-charge of international cricket at Chennai, Tamil Nadu Cricket Association (TNCA), has confirmed its preparations for letting in fans from Feb. 13.

If it transpires, this will be the first instance of crowds returning to sporting events in India since the onset of the pandemic.

It will also be the first time England’s cricket team has played in front of crowds in that time. There were no spectators for entire home summer, and in South Africa as well as Sri Lanka.