Esper defends use of National Guard in helping with unrest 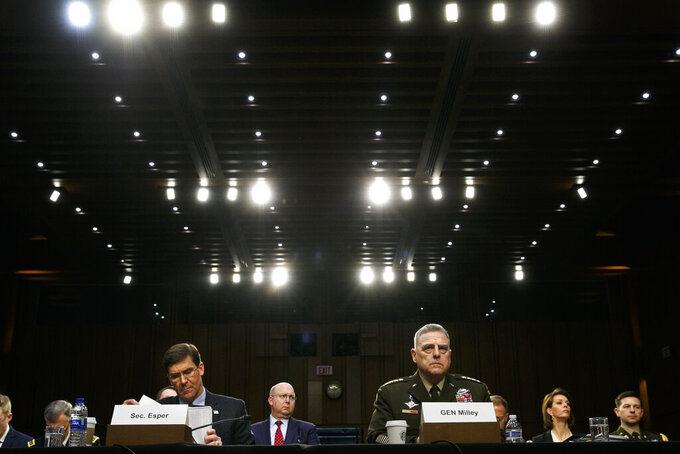 FILE - In this March 4, 2020, file photo Defense Secretary Mark Esper, left, and Chairman of the Joint Chiefs of Staff Gen. Mark Milley, listen during a Senate Armed Services Committee on budget posture on Capitol Hill in Washington. Esper and Milley are going before Congress for the first time in months to face a long list of controversies, including their differences with President Donald Trump over the handling of protests near the White House last month during unrest triggered by the killing George Floyd in police hands. (AP Photo/Jacquelyn Martin, File)

Esper's stance is at odds with Trump, who had spoken of invoking the Insurrection Act in order to use active-duty forces on the streets of the nation's capital during protests in late May and early June that included limited acts of violence, such as setting a fire in St. John's Episcopal Church near the White House. Several active-duty units were put on alert but ultimately were not deployed in Washington.

“Using active duty forces in a direct civilian law enforcement role should remain a last resort, and exercised only in the most urgent and dire of situations,” Esper said in a statement prepared for Thursday's hearing. "I want to make very clear that no active-duty military units engaged protesters or otherwise took a direct part in civilian law enforcement or federal protection missions in the District of Columbia or anywhere else in the country.”

The House Armed Services Committee was hearing testimony by Esper and Gen. Mark Milley, chairman of the Joint Chiefs of Staff, for the first time since March 4, when they appeared to discuss the administration's defense policy proposal. That was before the full impact of the coronavirus pandemic became apparent and before nationwide civil unrest threw the Pentagon's relations with Trump into crisis.

Trump's push for an aggressive response to the civil unrest led to an extraordinary clash with Esper and Milley, who on June 1 accompanied the president when he walked from the White House to St. John's Church on Lafayette Square, where he held up a Bible for photographers. That day, a National Guard helicopter was flown at extremely low altitude to help disperse protesters from the capital's streets, prompting a Pentagon investigation into whether that was a proper use of military resources.

Esper told the committee the Army has completed the helicopter probe and the results are under review.

Esper drew Trump's ire for telling a Pentagon news conference on June 3 that he opposed invoking the Insurrection Act to permit the president to use the armed forces to put down domestic civil unrest. Esper said he saw no need for such an extreme measure, a clear counterpoint to Trump’s threat to use force.

Esper also had previously made known his regret at having accompanied Trump to the presidential photo opportunity in front of St. John's on the day of the Lafayette Square confrontations.

In his testimony Thursday, Esper alluded to his worry that the photo op episode could be seen as undermining his apolitical role.

“As one of the country’s most respected institutions, we work to maintain the trust of the American people through our time-honored commitment to our mission and core values, while remaining neutral and non-partisan in all matters," he said.

Milley in June expressed public regret that he also had been part of the scene with Trump. He said he had been wrong to stride in uniform with Trump after protesters had been cleared from Lafayette Square. Milley said his presence “created a perception of the military involved in domestic politics.”

“I should not have been there,” he told a National Defense University commencement ceremony.

Esper and Milley were likely to face questions by committee members on a simmering debate over removing the names of Confederate Army officers from U.S. Army bases and banning other Confederate symbols. That also puts them potentially at odds with Trump, who has said he opposes removing the Confederate names from bases like Fort Bragg in North Carolina.

The House and Senate versions of the 2021 defense policy bill require name changes at those 10 Army bases. Trump has said he will veto the bill if it reaches his desk with that provision intact.

Neither Esper nor Milley has spoken publicly about two other controversies likely to be raised at the House hearing — intelligence reports that Russia may have offered bounty money to the Taliban in exchange for killing American and coalition troops in Afghanistan, and reported White House resistance to permitting the Army to promote Lt. Col. Alexander Vindman to the rank of colonel.

Vindman, who played a central role in the impeachment case against Trump, announced Wednesday that he will retire. A statement by his lawyer accused Trump of engaging in a “campaign of bullying, intimidation, and retaliation” that meant Vindman's future in the Army would “forever be limited.”

Vindman’s name was on a promotion list sent to Esper earlier this year, but that list was delayed for weeks because the White House asked for an investigation of Vindman, an official said. A Pentagon review found no evidence of misconduct. The official said the list was resent to Esper about a month ago, but again was delayed.

A senior defense official said the list was held up by a routine personnel review not related to Vindman. Esper received the final promotion list on Monday and approved it, with Vindman’s name included, and it was expected to be sent to the White House in the next day or two, the defense official said. The officials spoke on the condition of anonymity to discuss an internal personnel matter.