ESSAY: Contemplating death in a year when it feels closer 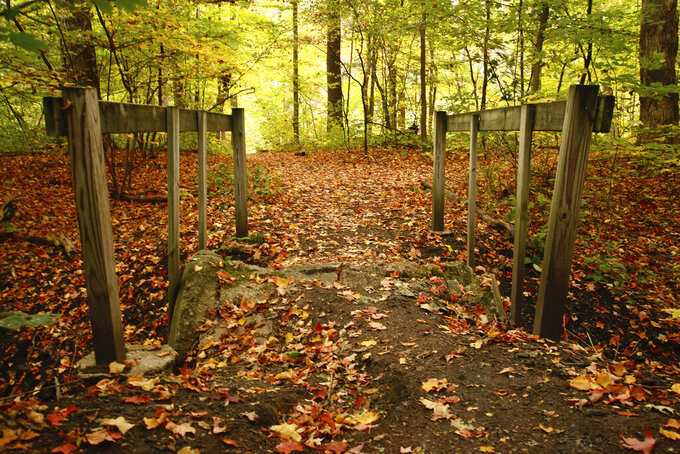 A trail path is covered in leaves Oct. 11, 2020, in St. Francis, Wis. In the era of coronavirus, AP journalist Carrie Antlfinger kept thinking about death. So she decided to explore its meaning and how she and those around her perceive it. (AP Photo/Carrie Antlfinger) 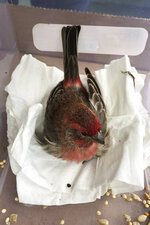 MILWAUKEE (AP) — One day, on a walk in the middle of a workday, I came across a gorgeous red finch on a sunny sidewalk that didn’t fly off when I approached it. It barely put up a fight when I picked it up with a tissue.

I had hoped to take it to the nearby wildlife rehab people. Maybe they could save it. So I walked back to my house and put it in an open plastic tub on my shady porch with seed and water.

I called the rehab people. I knew from past injured wildlife encounters that I should call ahead. The line was busy. Every time I checked on him, I felt a greater urgency. His breathing had increased and he was shaking a little. Their line remained busy.

Less than two hours later, his breathing had stopped.

I cried. I just couldn't hold back.

I’m struggling. And I have been for awhile.

A lot of us are. There’s a pandemic going on, and we are all isolated from each other. There’s a recession looming, maybe even a depression. And a divisive election, no matter which side you support.

But it feels like so much more. None of my emotions seem to want to hide anymore.

There's anger, irritation, sadness. Muting life with Netflix has an upside-down reaction for me: I’m crying at happy scenes and sobbing over suspenseful or stressful scenes. I wake at night with bouts of anxiety.

As a reporter, I’ve told the stories of countless tragedies over the last 20 years: mass murders, murder trials, tornadoes where people lost everything, any number of horrific crimes and dramatic hardships. Why does this feel so different?

It finally dawned on me: Death seems so close to everyone, more than I can ever remember. In the United States, for many, it hasn't been quite this way for a really long time.

So far, more than 225,000 people have died in the United States from the coronavirus or complications, according to Johns Hopkins University. On the entire planet, more than 45 million have been infected and more than 1.1 million are dead.

All that pain and suffering. All those individual stories. And right now, with the numbers of infected soaring in Wisconsin, where I live, my anxiety skyrockets.

Even physicians are dealing with anxiety, some for the first time, says Joan Anzia, psychiatrist and professor at Northwestern University Feinberg School of Medicine. She often counsels those in the health care field and says this sense of mortality is even hitting them.

“It’s been decades since physicians have had to endanger their own lives and put their own life at risk just by going to work,” she tells me when I call her.

The last time a life-threatening health crisis of this scale engulfed American society was early in the last century: the 1918 flu pandemic. Less widespread was polio, before a vaccine emerged in the 1950s.

Medical advancements though, have pushed death away, made it feel less familiar. Babies don't die as regularly. At one point before the funeral industry took off in the 19th century, funerals were held in the dead person's house — with the body present. Death, when it came, was nearer, less alien.

How did that change? According to Genevieve Keeney, CEO of the National Museum of Funeral History in Houston, the rise of the funeral industry changed the location of what happened after death and produced a disconnection. But more to blame, she believes, is the constant, often graphic portrayals of death in entertainment and news — making it a commodity for storytelling.

“We lost its meaning of what it’s trying to say,” she says.

For me, being in the news business, I relate closely with stories of COVID and death because I have seen dying firsthand throughout my career.

There’s the story about the son bringing in his mom to the ER for the virus. She survived and he didn’t. A couple married 60 years dies within 48 hours of each other. There’s my co-worker in New York who ran marathons around the world but ultimately fell to the virus.

But what has been commonplace for certain groups — police, doctors, journalists — has arrived at many more doorsteps this year.

“This isn’t simply an isolated event or story on the news that you feel empathy for. But in some way or another this virus has impacted nearly every person’s life ,” says Elyssa Barbash, a psychologist at Tampa Therapy in Florida. As she sees it, we're not only mourning because of the death around us; we're also mourning that old way of living.

“This entire situation happened pretty rapidly and no one was prepared for the substantial life changes it brought," she says. "Grief comes in a lot of forms, but is ultimately about loss. ”

That could be me. My dad passed away in March in a nursing home. He had dementia and had been declining. My uncle with Down Syndrome, to whom I had been close all my life, died last fall. My sweet cat George died last summer.

Further complicating things: my intense need to protect my 76-year-old mother, who is in a high-risk group. She lives alone, but the isolation is getting to her. I can't say I'm surprised.

Death is inevitable. So why does this feel so different?

Maybe the answer lies in American culture and history. I asked Anita Hanning, who studies culture and how it deals with death and dying.

“The coronavirus is really pushing our noses into the fact of our mortality. And that is a truth that is always present, but that not many of us are choosing to engage with on a regular basis,” says Hanning, an associate professor of anthropology at Brandeis University in Massachusetts.

What doesn’t help, she says, is that Americans associate death with failure by medicine rather than a natural part of life. And they tend to concentrate on living longer rather than “the quality of our days.”

“We’ve really kind of lost the language and the experience to really engage with our mortality in more healthy ways," she says.

This attitude of medicine being all-powerful started to develop after medicine started really making advances in the late 19th century, according to Nancy Tomes, a history professor at Stony Brook University in New York.

“Young folks seemed so surprised that there isn’t a way to cure this, that there isn’t a vaccine that you could pull out of your hat in six weeks,” says Tomes, author of “The Gospel of Germs: Men, Women, and the Microbe in American Life.”

During the 1918 flu, people were somewhat accustomed to dealing with infectious diseases, considering the No. 1 cause of death in 1900 was tuberculosis, she said. Also circulating was polio.

Today's unfamiliarity and lack of fear could help explain why some people don’t wear masks or distance to mitigate risk for others. It’s been a trigger for me because they represent an increased risk of catching the virus. And in my head, it’s very catchable.

Did I have it back in mid-March, right after my dad’s funeral, right before that sort of thing was completely prohibited? I don't know. A couple people showed up sick. I had an on-and-off fever, chest pressure, extreme exhaustion.

Since it’s so contagious, I couldn’t shake the idea that my entire family would also get it. It didn’t help that when I was lying in bed sick I saw a news story about four family members dying from the virus after attending the same family dinner in New Jersey.

Fear of getting the coronavirus reminds Margaret “Elaine” Stalheim, 92, of the fear of getting polio, which happened to her when she was in her early 20s and starting her family. She remembers the isolation and the quarantine signs on homes. She recovered after months of physical therapy.

I’ve been through enough life changes to know that it alters your perspective like that. But I know I haven’t settled into a great place with death. And I am guilty of expecting too much from medicine.

My encounter with the finch crystalized my problem with death. In my mind, I'd failed at saving this little bird that needed my help. But he likely would have died anyway.

I just hope the quiet shade he had in his final moments was better than dying in the sun on a piece of concrete. I will choose to hold onto that, in light of my new self-knowledge. Death may be inevitable, but allowing it to conquer my life is not.