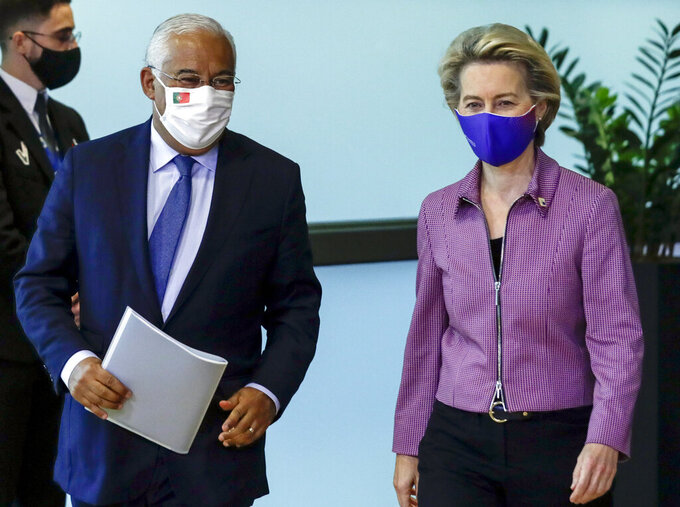 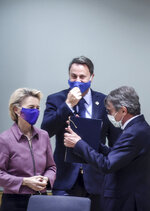 BRUSSELS (AP) — As a fresh wave of the coronavirus sweeps across much of Europe, the reality of the disease struck a summit of European Union leaders on Thursday when one of the 27-nation bloc's top officials abandoned the meeting to go into self-imposed quarantine.

European Commission President Ursula von der Leyen left the summit venue in Brussels shortly after the meeting began because one of her close staffers tested positive for COVID-19.

“I myself have tested negative,” von der Leyen, a doctor by training, tweeted. “However, as a precaution I am immediately leaving the European Council to go into self-isolation.”

In its latest update on Thursday, the European Centre for Disease Prevention and Control said that more than 4.4 million cases of the virus have been reported in the 27 EU nations, plus Britain, Iceland, Liechtenstein, Norway and Switzerland since the pandemic began. More than 198,000 people have died. Several nations are tightening preventive measures.

Images from inside the venue, which is off limits to reporters, showed von der Leyen mingling with several other heads of government and officials, including the prime ministers of the Czech Republic, Luxembourg, Portugal and the Netherlands, and the president of the European Parliament.

Like the others, she mostly wore a mask except when sitting, and appeared to be observing adequate social distancing. The sprawling summit round table was generously spaced, and a few leaders could be seen washing their hands with gel as they entered. The usual hugs and kisses so common last year were replaced by elbow bumps.

French President Emmanuel Macron notably engaged in a close-contact talk with Czech Prime Minister Andrej Babis, who is also representing Poland because its premier, Mateusz Morawiecki is under quarantine after coming into contact with a coronavirus-infected bodyguard. A first test showed Morawiecki was not infected. He was to take another test later Thursday.

Tackling the virus — which was due to be debated on Friday — tense post-Brexit trade talks with Britain, climate change and EU-Africa relations were the main items on the agenda.

“The debate on Brexit today required a physical presence and a number of leaders were in favor of a physical presence," European Council President Charles Michel, who is chairing the two-day summit, told reporters. “We have to adapt in the case of COVID-19.”

“As far as the future goes, we will systematically assess and take into account the different elements and consult the delegations about what the best way of working is," Michel said.

Since the pandemic first surfaced in Europe in February, EU leaders have held several summits via videoconference. But they held their last meeting in person just two weeks ago. Officials say it's often the only way to get really sensitive business done. However, not everyone was happy about traveling back to Brussels so soon.

“This summit should be held as a video conference. I have on several occasions proposed holding video conferences instead of meeting in person,” Danish Prime Minister Mette Frederiksen told reporters on arrival in Brussels. “There are some discussions where one needs to be brought a little closer to each other. And then there are other meetings where you can do it as a video conference.”

The question remains whether this might be the last in-person meeting for a while if the coronavirus continues to spread at rates not seen for months. The next official summit in Brussels is scheduled for Dec. 10-11. On Thursday, the European Parliament said its next plenary session scheduled next week in the French city of Strasbourg would be held remotely.

Parliament President David Sassoli said the virus has already infected a number of EU lawmakers, staffers and their associates. “Traveling is very dangerous. The situation in Strasbourg is critical and in Brussels it’s very serious,” he said.

Samuel Petrequin in Brussels, Jan M. Olsen in Copenhagen and Monika Scislowska in Warsaw contributed to this report.