EU launches conference to debate its future with citizens 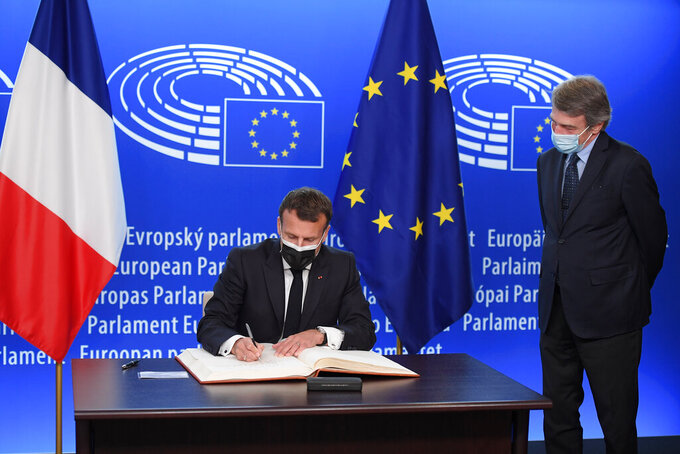 PARIS (AP) — French President Emmanuel Macron on Sunday expressed hope that Europe would rediscover the path of “great projects, great ambitions and great dreams” as the European Union launched a wide consultation process meant to design the shape of the bloc's future.

Macron spoke as part of Europe Day, the inaugural event of the Conference on the Future of Europe in the French city of Strasbourg.

“What Europe do we want in 10 years, 15 years from now?,” Macron asked in his opening speech, calling on people to debate all major issues, from the bloc’s borders to new institutions, cultural projects, education and the fight against climate change.

The process also aims at bringing the EU's complex decision-making closer to its 450 million citizens.

He called on Europeans to get inspired by the United States to rediscover ways to “shape the future and move fast.”

The pandemic has shown that the EU lacked the effective tools to react quickly to a continent-wide emergency. The bloc was notably criticized at the beginning of the year for its vaccination campaign starting slower compared to the U.S. and the United Kingdom.

“The pandemic has been traumatic ... and like all trauma we need to find a way of talk about it if we want to move beyond it," European Commission President Ursula von der Leyen said. “And there’s no better way to do that than by offering prospective, hope and the ability to change things for the better."

The process is meant to allow “young people in particular to have their say” about Europe's future, she said.

A digital platform and series of conference-related events will enable people to share their views on changes and improvements they wish for the EU.

European Parliament President David Sassoli said “as we are about to rebuild our economies and our societies on new foundations ... it is even more crucial and urgent to listen to our fellow citizens, to feel their needs, their expectations in terms of assistance, jobs, dignity, security and prosperity.”

The conference is expected to reach conclusions to provide guidance on the future of Europe by spring 2022.

Meanwhile, Macron hoped the European Parliament will be able to hold its next plenary session in June in Strasbourg, its official seat. European lawmakers didn’t return to the French city since February last year because of the virus crisis.