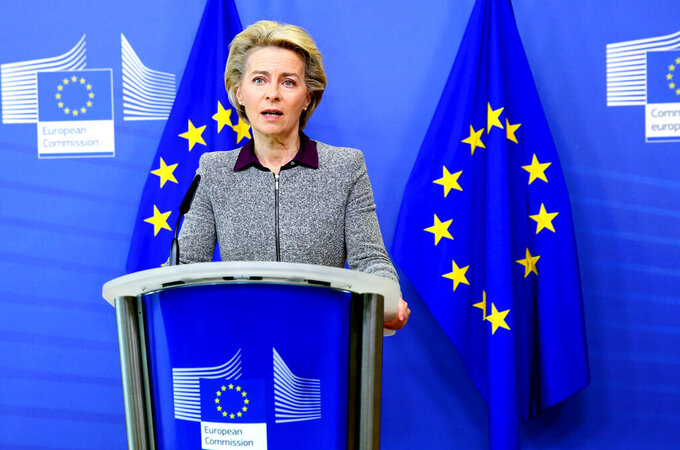 President of the European Commission Ursula von der Leyen speaks during a media conference at EU headquarters in Brussels, Thursday, Aug. 27, 2020. The European Commission president said Thursday her team could face a reshuffle after the resignation of the Irish trade Commissioner, Phil Hogan, over a controversy involving his questionable adherence to COVID-19 rules. (Francois Walschaerts, Pool Via AP)

BRUSSELS (AP) — The European Union’s executive commission is proposing its experienced Latvian vice president, Valdis Dombrovskis, to take over the post as trade chief of the bloc following the resignation of Ireland's Phil Hogan.

Dombrovskis had already been holding the post temporarily since Hogan's resignation on Aug. 26. He now fills a vital job in dealing with the United States, China and post-Brexit Britain, with all three demanding near daily attention.

“We are currently in turbulent waters," Dombrovskis said.

The move means von der Leyen limited her reshuffle of the EU executive body and with McGuinness she further narrowed the gender gap in the commission, which now stands at 14 men and 13 women.

“She has great qualifications and my full trust for this post," said von er Leyen.

The moves still have to be approved by the European Parliament, but von der Leyen is hoping for a smooth passage at a time when she should be focusing on managing the coronavirus pandemic, an unprecedented economic collapse, and her mid-September State of the Union address.

Hogan resigned last month after he became embroiled in a controversy over a recent trip home to Ireland and questionable adherence to COVID-19 rules.

He has come under fire in his home country amid allegations he skirted rules other Irish citizens have to live by to contain the second wave of the coronavirus pandemic. Not only had Hogan attended a posh golf dinner with some 80 guests when maximum attendance should have been much lower, but he was also criticized for traveling in parts of Ireland where a lockdown applied — and for emerging early from a mandatory two-week quarantine.