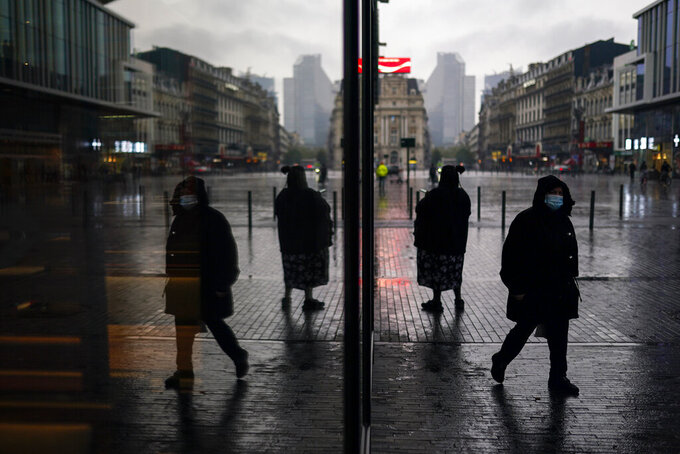 Passers-by, wearing face masks to prevent the spread of the coronavirus COVID-19, walk along a commercial area during a rainy autumn day in Brussels, Tuesday, Nov. 10, 2020. This autumn, Belgium was the European country with the highest number of coronavirus cases per 100,000 cases at some point but the situation has been gradually improving over the past seven days.(AP Photo/Francisco Seco)

BRUSSELS (AP) — After months of wrangling, European Union negotiators reached an agreement Tuesday on the bloc’s next seven-year budget and a sorely-needed coronavirus support package worth a total of some 1.8 trillion euros ($2.1 trillion), which could enter force early next year.

The deal, clinched between European Council negotiators representing the EU's 27 member countries and the European Parliament, must still officially be endorsed by the bloc’s ministers and the full EU legislature. The budget is meant to take effect on Jan. 1, and officials are desperate to have the agreement rubber stamped within weeks.

“We have finally made it,” Germany’s EU envoy, Michael Clauss, said. “We urgently need the recovery fund up and running in order to cushion the dire economic consequences of the pandemic.”

Germany currently holds the EU's rotating presidency. Clauss expressed hope that all member countries and lawmakers understand the need to move quickly to endorse the package, which includes a 750-billion-euro ($887-billion) emergency coronavirus recovery fund. He said "no one needs new hurdles and further delays” as the pandemic continues to ravage European economies.

EU lawmakers said they secured an extra 16 billion euros ($19 billion) over what EU leaders were previously offering, and that most of this money would help protect European citizens against the impact of the pandemic. One billion euros ($1.2 billion) would be used to respond to future crises.

“Help is needed for citizens and business badly hit by the coronavirus crisis. Our recovery plan will help us turn the challenge of the pandemic into an opportunity for a recovery led by the green and digital transition,” she said.

A lot was at stake over the agreement. It took around four months to seal and raised questions about whether EU countries are ready to put their money where their mouths are when it comes to European policy ambitions, like fighting climate change and developing the digital economy.

Given the impact of the virus, though, leaders often pandered to their home audiences, reluctant to give the impression that they might be splashing tax-payers’ cash when economic growth is limited. Austria, Denmark, the Netherlands and Sweden took a particularly hard line.

With Britain gone from their ranks, the leaders also wanted to prove that Europe can still forge ahead toward brighter horizons, but Brexit left them with a sizeable budget hole; about 75 billion euros ($88 billion) over seven years.

In the great scheme of things this is not a huge amount of money for the world’s biggest trading bloc. Even if a trillion euros ($1.1 trillion) sounds like a lot for a 7-year budget, it actually amounts to about 1% of the gross national income of the 27 nations combined.