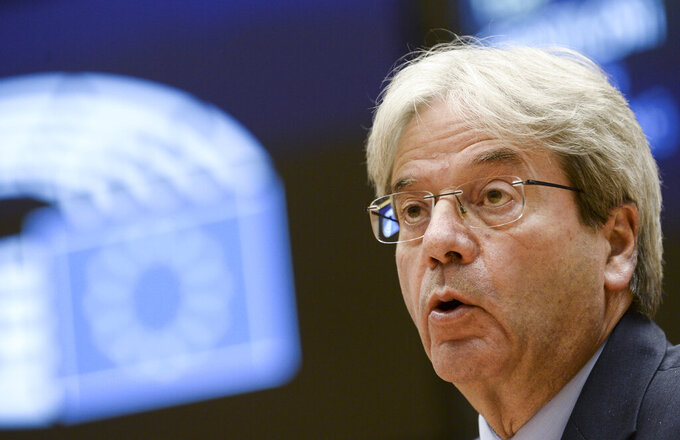 FILE - In this Wednesday, April 28, 2021 file photo, European Commissioner for Economy Paolo Gentiloni addresses the plenary chamber at the European Parliament in Brussels. The European Union's top economy official said Monday, May 10, 2021 that the measures the EU and its 27 member states have in the works to come out of the pandemic total some US dollars 5.85 trillion. EU economy Commissioner Paolo Gentiloni told a European Parliament Committee said that if comparisons are made with U.S. President Biden pandemic stimulus relief package, the 27-nation EU can confidently stand next to to Washington when all efforts are counted together. (Johanna Geron, Pool via AP, File)

BRUSSELS (AP) — The European Union's top economy official said Monday that the recovery measures the EU and its 27 member states have in the works to emerge from the pandemic total around $5.85 trillion.

EU Economy Commissioner Paolo Gentiloni told a European Parliament committee said that if comparisons are made with U.S. President Joe Biden's pandemic stimulus relief package, the EU can confidently stand next to to Washington when all efforts are counted together.

The EU has agreed to a common recovery fund package of 750 billion euros ($910 billion), plus a 1.1 trillion euro ($1.3 trillion) seven-year budget that will be strongly geared toward dealing with the unprecedented economic recession caused by COVID-19 that the bloc's 450 million citizens will have to overcome. Many of those measures still need a final stamp of legislative approval.

During his first 100 days in office, Biden has secured passage of a sweeping $1.9 trillion pandemic package to bring relief to 330 million Americans. There is also a proposed $2 trillion-plus infrastructure plan and the recently unveiled $1.8 trillion proposed student-families-workers plan bringing the total to a potential $6 trillion.

“If we look at it in a certain way, we could say that the U.S. reaction was stronger, faster than the European one,” Gentiloni said.

Take note, however, “that we are not a federal state. And so we have to consider both member states and the EU level,” bringing the total to $4.8 trillion.

“So we are not used to mixing all the different interventions. But if we do this, we reach an amount which is not so different from the effort of the United States,” Gentiloni said.

Many major social affairs and economic policies are still run at a national level in the European Union, and stimulus measures for companies and the workforce also have a massive national input which is rarely visible in EU statistics.

Still the 750-billion euro “Next Generation EU” package stands out because it allows the bloc for the first time to raise money on the markets by itself. Much of the aid will be spent among the poorer and harder-hit member states.

The EU has a strict set of benchmarks that member states must reach if the money is to be paid out. In all, 37% must be spent on green projects, ranging from offshore wind parks to cycling tracks. And 20% must go to digital projects, including 5G networks and digitizing public administration.

Funds will only be released piecemeal once member states have proven previous aid has been spent according to plan.