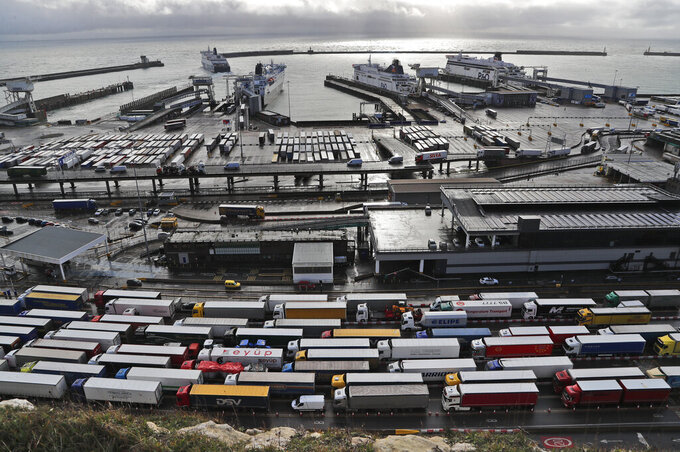 FILE - In this Friday, Dec. 11, 2020 file photo, lorries queue at Check-in at the port in Dover, Britain, before entering the EU. Britain announced Thursday, March 11, 2021 that it is delaying the imposition of checks on some goods from the European Union to give businesses more time to prepare for new post-Brexit rules. The U.K. government says it is postponing full border controls until Jan. 1, six months later than planned, because of disruption caused by the coronavirus pandemic. (AP Photo/Frank Augstein, file)

The divorce between the U.K. and the EU is turning nastier by the day.

The European Union said Monday it is starting legal action against the United Kingdom, arguing the former member does not respect the conditions of the Brexit withdrawal agreement and is violating international law.

The 27-nation EU is objecting to Britain unilaterally extending a grace period beyond Apr. 1 that applies to trade on the island of Ireland, where the EU and the United Kingdom share a land border and where a special trade system was set up as part of the Brexit divorce deal.

“The recent measures once again set the U.K. on the path of a deliberate breach of its international law obligations and the duty of good faith that should prevail,” EU Vice President Maros Sefcovic wrote to his U.K. counterpart David Frost.

It marks a further worsening of relations between the two sides since a divorce transition period ended on Jan. 1. Disputes have ranged from fights over vaccines, to the full diplomatic recognition of the EU in Britain and now again the terms of the divorce agreement.

On March 3 the U.K. decided to unilaterally extend a grace period until October on checks for goods moving between Britain and Northern Ireland.

Northern Ireland is part of the United Kingdom but remained part of the EU’s single market for goods after Brexit to avoid a hard border that could revive sectarian violence. That means that products arriving from Britain face EU import regulations.

A U.K. government spokesperson said it will respond to the EU Commission “in due course," insisting the measures are temporary and aimed at reducing disruptions in Northern Ireland.

“They are lawful and part of a progressive and good faith implementation of the Northern Ireland Protocol," the spokesperson said in a statement. “Low key operational measures like these are well precedented and common in the early days of major international treaties. In some areas, the EU also seems to need time to implement the detail of our agreements. This is a normal process when implementing new treaties and not something that should warrant legal action."

In September last year, the U.K. had already upset the 27-nation bloc when it considered legislation that would have given Boris Johnson’s government the power to override part of the Brexit withdrawal agreement relating to Northern Ireland. So the EU sees the U.K.’s March 3 statement as proof that Britain has now twice sought to violate an international agreement.

The sensitivity of Northern Ireland’s status was underscored this year when the EU threatened to ban shipments of coronavirus vaccines to Northern Ireland as part of moves to shore up the bloc’s supply. That would have drawn a hard border on the island of Ireland - exactly the scenario the Brexit deal was crafted to avoid.

The grace periods cover areas such as animal products and parcel deliveries to Northern Ireland from the rest of Britain and mean checks are not yet fully applied. The first of the grace periods had been due to expire at the end of this month but the U.K. has pledged to extend them until October in a move widely welcomed by businesses in Northern Ireland.

The U.K. government said that it saw challenges that businesses like supermarkets faced in Northern Ireland in the first weeks of the year. “That’s why it is right to provide a proper further period for them to plan ahead, particularly in the current circumstances of a global pandemic," it added.

In what is part of a drawn-out legal process, the EU has sent a so-called “letter of formal notice” to London complaining it was breaching the EU-U.K. deal. The U.K. has one month to reply before the EU can start a second phase. The issue could eventually go to arbitration, and ultimately, the U.K. could be hit with financial sanctions.

Sefcovic wrote in his letter he was hoping that the U.K. would soon come ahead with a plan on how to enforce the Northern Ireland checks so as to stave off further legal action.

Monday's move was indicative of the overall bad climate between the two sides. Only last week, the leaders of the EU and the U.K. went head-to-head in an angry exchange over vaccine exports.

After the British government summoned the EU envoy to explain comments by European Council President Charles Michel that Britain had issued a vaccine export ban, U.K. Prime Minister Boris Johnson told the House of Commons that it was his “wish to correct the suggestion from the European Council president."

Already uneasy bedfellows during Britain’s 47 years of EU membership, relations have worsened since the 2016 referendum when the United Kingdom voted to leave the bloc. After acrimonious departure talks, the split became official last year, but both sides then started fighting over a trade agreement.

A deal was reached on Christmas Eve but still needs to be approved by the European Parliament. The latest legal troubles could have an impact on the legislative approval.