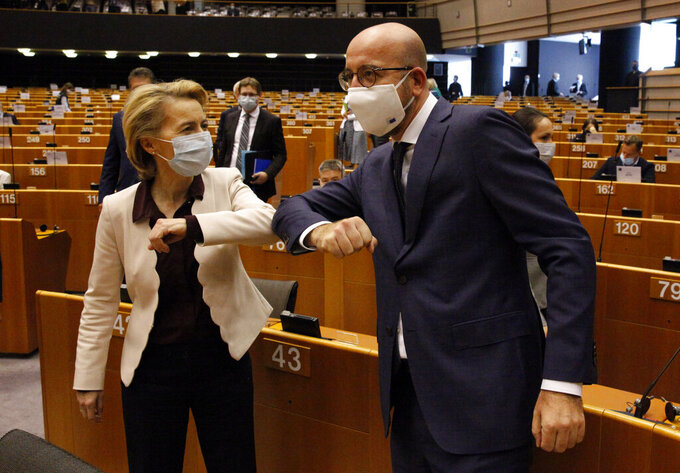 European Commission President Ursula von der Leyen, left, and European Council President Charles Michel bump elbows as they arrive at the main chamber of the European Parliament in Brussels, Thursday, July 23, 2020. European leaders took a historic step towards sharing financial burdens among the EU's 27 countries by agreeing to borrow and spend together to pull the economy out of the deep recession caused by the coronavirus outbreak (Francois Walschaerts, Pool Photo via AP)

BRUSSELS (AP) — The European Union's top official said Thursday that planned cuts in the next long-term multi-billion budget of the 27-nation bloc are a “difficult pill to swallow."

In a speech delivered to European lawmakers, European Commission President Ursula von der Leyen admitted that the budget deal for the next seven years adopted this week after a four-day EU leaders's summit features many inadequacies.

The 1.07 trillion-euro ($1.2 trillion) budget was negotiated in tandem with a 750 billion-euro ($868 billion) economic recovery package that aims to help EU countries bounce back from the recession caused by the coronavirus pandemic.

Hailed as a “historic” moment for Europe by many EU leaders, the deal has however raised concerns among European lawmakers, who slammed its lack of ambition in the context of the economic crisis triggered by the virus. The European Parliament has the final say in approving the budget.

A few hours after Von der Leyen's speech, lawmakers adopted a resolution by a large majority that strongly criticizes the cuts. Threatening to withhold their consent if a better agreement isn't found during future negotiations, they said the planned cuts will “undermine the foundations of a sustainable and resilient recovery.” A final vote on the budget is not expected to take place before the end of the year.

Von der Leyen said the deal reached this week after a marathon summit was the “light at the end of the tunnel. But with light also comes shadow. And in this case, the shadow comes in the form of a very lean long term EU budget.”

Many cuts were agreed to under pressure from a group of countries led by the Netherlands known as the “Frugals,” which were also offered large reductions to their contributions to the bloc’s budget to secure a deal.

“There are regrettable and painful decisions on many programs which have crucial European added values," said von der Leyen. She deplored the lack of funding for programs earmarked for research, health, and investment, as well as the limited size of the budget for programs outside the EU.

“We should always remember that the values of EU programs far outweigh their costs," von der Leyen insisted. “Yes, we managed to avoid even further cuts as some member states wanted. But this (budget) is a difficult pill to swallow."