EURO 2020: Shevchenko aims to break through as Ukraine coach 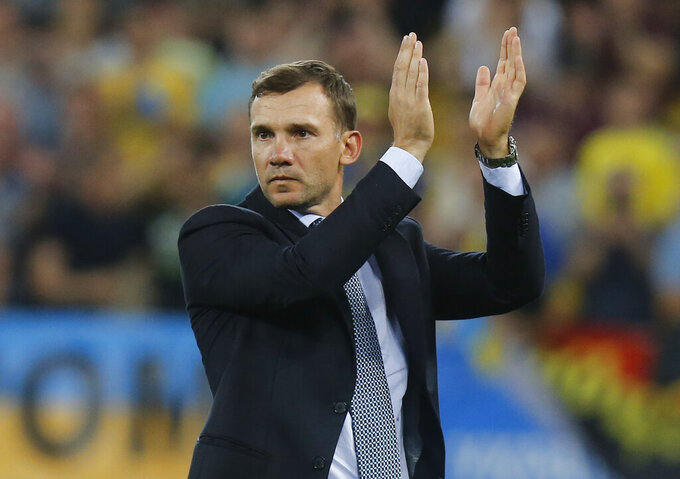 To see what talent and hard work can achieve, Ukraine's players need only to look at their coach.

AC Milan great Andriy Shevchenko is heading into his first major tournament as head coach after five years in charge. The aim is to reach the knockout stages of the European Championship for the first time after group-stage exits in 2012 and 2016. Shevchenko was an assistant coach in France five years ago and made the step up after the tournament.

The core of his team is made up of established players like Manchester City fullback Oleksandr Zinchenko, West Ham winger Andriy Yarmolenko and Shakhtar Donetsk midfielder Yevhen Konoplyanka.

Being drawn with the Netherlands, Austria and North Macedonia in Group C gives Ukraine a solid chance of advancement.

Shevchenko's preliminary squad for the tournament contains 34 players, but only two from the Ukraine team which won the Under-20 World Cup in 2019 — Real Madrid reserve goalkeeper Andriy Lunin and Shakhtar left back Viktor Korniyenko.

Korniyenko has never played for the national team and Lunin is being kept out of the starting lineup by 36-year-old Andriy Pyatov.

Ukraine's most exciting young player was too young for that Under-20 team in 2019. Eighteen-year-old central defender Illya Zabarnyi broke into Dynamo Kyiv's team this season and played in all 10 of the club's games in the Champions League and Europa League against opponents like Barcelona and Juventus.

Zabarnyi's international debut came in October as the team, diminished by coronavirus cases, was routed by France 7-1 in a friendly. He has played five more times since then and helped to stabilize the team ahead of Euro 2020.

Turning potential into senior success is an old problem for Ukraine, though. Pyatov was on the team which finished second at the 2006 European Under-21 Championship, but Ukraine didn't qualify for the 2010, 2014 or 2018 editions of the World Cup.

Ukraine has had a tougher time than most national teams amid the pandemic. After a string of players and staff members tested positive for the coronavirus, the whole team was quarantined by Swiss officials and couldn't play its last Nations League game. A lengthy legal battle ensued before the Court of Arbitration for Sport ruled Ukraine lost the game by default and it was relegated.

Injuries are a problem, too, with Yarmolenko and Konoplyanka rushing to recover fitness and form after missing Ukraine's three World Cup qualifying games in March. Ukraine drew all those games 1-1. That was a respectable result against World Cup champion France — especially after the 7-1 friendly loss six months before — but below expectations against Finland and deeply disappointing against Kazakhstan.

When it all clicks, though, Ukraine can threaten the best teams in Europe.

The high point of Shevchenko's time in charge was a 2-1 win over Portugal in October 2019. Goals from Yarmolenko and striker Roman Yaremchuk put Ukraine on course to qualify for Euro 2020.