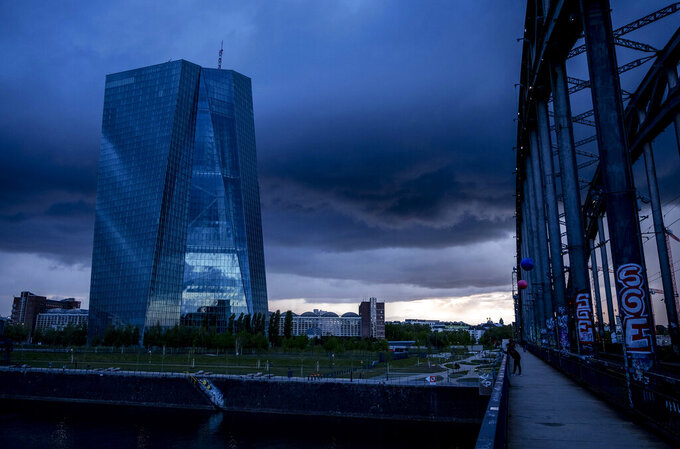 FILE - In this file photo dated Friday, May 1, 2020, the European Central Bank is shadowed by heavy clouds in Frankfurt, Germany. The central bank for the 19 countries that use the euro said Thursday June 18, 2020, That it has handed out more than a trillion euros in cheap loans to banks as part of its effort to get the economy through the virus outbreak. (AP Photo/Michael Probst, FILE)

FRANKFURT, Germany (AP) — The European Central Bank has handed out 1.31 trillion euros ($1.46 trillion) in long-term, ultra-cheap credit to hundreds of banks as part of its emergency support aimed at cushioning the impact of the coronavirus pandemic on businesses and workers.

The three-year loans are aimed at making sure banks can keep lending to companies so they don't run out of money and go out of business during the crisis. That would cause a cascading loss of jobs and income and hurt the long-term recovery from the severe interruptions to business due to the measures aimed at limiting the spread of the virus.

The ECB said Thursday that 742 banks across the 19 countries that use the euro currency took up the credit offer, which can carry a negative interest rate of as low as minus 1.0% so long as banks keep up their lending to businesses. That means banks are getting paid by the ECB to borrow the money, an offer that many found hard to refuse. The ECB cut the rate on the offer from minus 0.5% at its April 30 meeting as the virus lockdowns slammed the European economy.

The credit offer takes its place alongside the bank's pandemic bond purchase program, which is pumping 1.35 trillion euros in newly created money into the economy. Similar measures to loosen credit have been deployed by the U.S. Federal Reserve and other central banks around the globe. The Bank of England on Thursday boosted its bond-purchase stimulus by a further 100 billion pounds ($125 billion.)

The net amount loaned was 548 billion euros since banks were allowed to exchange earlier, less favorable loans in return for the new offering. Nonetheless it was the biggest loan operation in the history of the ECB, which was founded in 1998 ahead of the euro's launch in 1999.

The fear among economists is that the interruptions to business due to the virus outbreak will eliminate otherwise viable businesses. The European Union's executive commission estimates that the eurozone economy will shrink by 7.75% this year.

The ECB is the central bank for the countries that use the shared euro currency.