Even partial view of economic damage from virus is massive 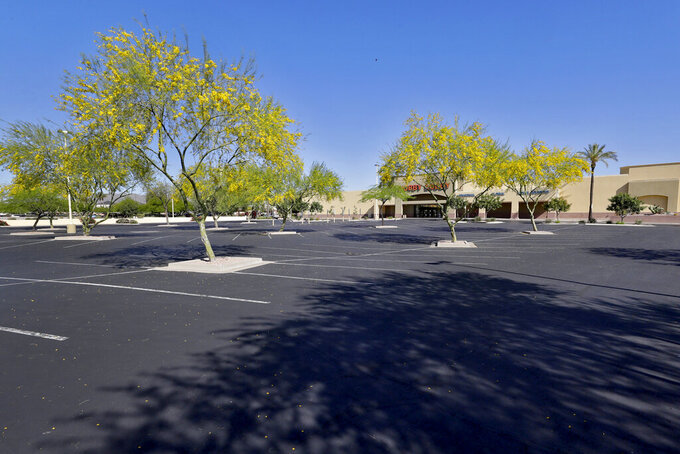 A parking lot outside closed businesses remains empty Friday, April 24, 2020, in Phoenix. The outbreak of the coronavirus has dealt a shock to the global economy with unprecedented speed and retail stores may have been changed forever by the outbreak. (AP Photo/Matt York)

GOVERNMENT & CENTRAL BANKS: Governments around the globe are laying out billions of dollars to stabilize their economies even as revenue from taxes seizes up.

— The famous French cafes, along with restaurants and bars, will remain closed at least through May. In support, Finance Minister Bruno Le Maire said the government is further deferring tax payments and extending short-term unemployment payouts to support those businesses.

— Factory orders in the U.S. plunged last month and will get worse. The nation was on lockdown for only the first half of March.

PLANES: There are few industries that have been harder hit that airlines, and the situation grows worse daily. Shares of Southwest Airlines have fallen 47% this year, and Southwest is easily the best performing stock among major U.S. airlines.

— “Traffic is virtually zero” and if it doesn’t improve by July, “we will have to prepare ourselves for a drastically smaller airline,” said Southwest CEO Gary Kelly.

The airline is burning through cash at “an alarming rate,” although Kelly didn’t give a figure. Southwest reports quarterly results Tuesday, after a dismal report from Delta.

— United Airlines began requiring flight attendants to wear face masks during flights and possibly in some airports, depending on local rules.

— A major airline union is seeking mandatory masks for passengers and crew aboard all flights. The Association of Flight Attendants, which represents workers at United and several smaller U.S. carriers, repeated its call for a temporary ban on leisure travel during the COVID-19 pandemic.

— The French and Dutch governments announced nearly $10 billion in bailout money to rescue Air France and KLM. Their planes have been largely grounded by virus lockdowns around the world, that have forced other carriers to collapse or seek government rescues.

TRAINS: Major railroads began releasing quarterly numbers this week and they are dire. CSX withdrew guidance for the year and Union Pacific expects volumes to plunge.

— Economists with Oxford Economics say withering rail traffic illustrates seizing business activity. Steel production is down 34% through the first week of April, compared with last year, and that will grow weaker as investments dry up and profits shrink, wrote Oxford economists Oren Klachkin and Gregory Daco.

— Data from the American Railroad Association shows that by industry, railcar loads of motor vehicles and parts, coal, and metallic ores and metals have dropped the most, down 88%, 36%, and 25%, respectively, in the week ending April 11.

AND AUTOMOBILES: There is a push to open auto manufacturing plants, particularly in Europe, but they remain closed in the U.S.

— Japanese automaker Mitsubishi Motors anticipates a loss of 26 billion yen ($240 million) for the first quarter. Previously, it had expected a profit of 5 billion yen ($46 million).

The auto industry is the pillar of Japan’s economy and the fallout is expected to be great, with the world’s third largest economy possibly headed to a recession.

— Auto service centers are starting to run short of parts as they try to fix vehicles with the industry almost shut down due to coronavirus fears, the head of an influential trade association says.

John Bozzella, CEO of the Alliance for Automotive Innovation, which represents most automakers, says the shortage is hampering warranty work and other repairs. But he knows of no delays yet in making safety recall fixes.

Bozzella says his association has been in contact with most automakers. Some automakers and parts suppliers plan to restart their factories as early as next week after being shut down for more than a month. Many won’t restart until early May. The United Auto Workers union is still negotiating with Detroit automakers but says an early May restart is too soon.

MARKETS: U.S. markets will in all likelihood end down for the week, but they have stabilized from earlier routs.

— Equities fell across much of Europe and Asia, but were steady in the U.S.

ROAD LESS TRAVELED: People are working from home and driving less because of stay-home orders, and that means less revenue for toll road operators.

— Moody’s Investors Service said Friday that it expects toll road traffic to fall 50% to 80% through mid-June before starting to recover slowly. However, the ratings agency said operators will be fine for years — even decades — because of strong balance sheets and lender-required reserves. Some toll roads are operated by state or regional authorities, such as the New York State Thruway, while many in states like Texas are owned by private companies such as Spain’s Cintra.