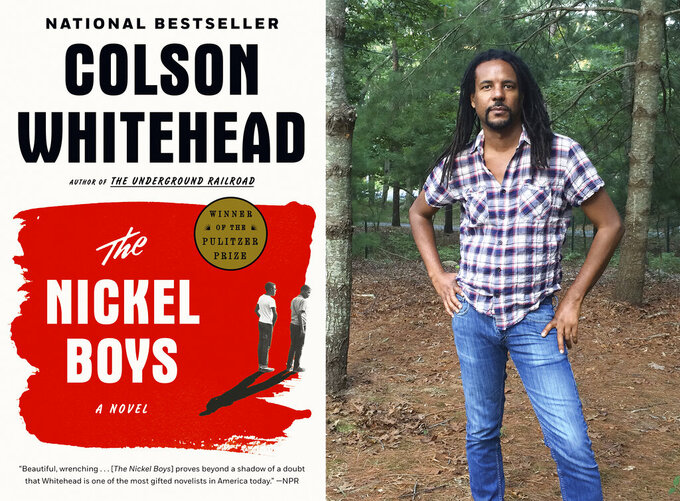 This combination photo shows the cover of the Pulitzer Prize winning novel "The Nickel Boys," left, and a portrait of author Colson Whitehead. Whitehead became the first fiction writer to win Pulitzer Prizes for back to back novels. “The Nickel Boys,” his followup to “Underground Railroad,” won the Pulitzer in April and comes out in paperback this week. He also managed to finish a crime novel, with the working title “Harlem Shuffle,” that he began more than a year ago. (Doubleday, left, and Madeline Whitehead/Doubleday via AP)

NEW YORK (AP) — Even sheltering in place, Colson Whitehead has had an eventful year.

Whitehead became the first fiction writer to win Pulitzers for back to back novels, “Underground Railroad” and “The Nickel Boys,” which won the Pulitzer in May and comes out in paperback this week. He also managed to finish a crime novel, with the working title “Harlem Shuffle,” that he had begun more than a year ago.

"I was on the downward slope of the book when the quarantine started," said Whitehead during a recent telephone interview. “For the first eight weeks, most of the time was spent looking after the kids, making sure the Wi-Fi was on so they could do their schooling. Then I finished the draft of the book — not sure how it happened. You just have to find the time and not get too distracted to do the final leg of the book.”

Whitehead, 50, who has been staying in Long Island with his wife and two children. He has been a published author since his acclaimed debut novel, “The Intuitionist,” came out in 1999, and he has well established himself for his vivid prose style and imagination. “Zone One,” published in 2011, is speculative fiction that depicts a pandemic-stricken New York City, a narrative which became painfully timely during the coronavirus outbreak. “Underground Railroad” combined historical detail from the 19th century and a unique twist: Whitehead imagined the network for bringing runaway slaves North to their freedom as a literal railroad.

“The Nickel Boys” stays closer to the facts: It's based on a notorious Florida boarding school from the Jim Crow era that brutalized and sometimes murdered the kids sent there. One protagonist is a promising teenager who lands in the Nickel school after being accused of a crime he didn't commit.

“In ‘Underground Railroad,' I felt I needed a fantastic device to move Cora (the main character) to her freedom. With ‘The Nickel Boys,’ there was no need for any kind of fantastic flourish. The situation speaks for itself," Whitehead said.

During his interview, Whitehead also discussed the Black Lives Matter protests, early influences and how each book reflects the person he was while writing it.

CHILDHOOD READING: “I wanted to write from a very early age, just from reading Marvel Comics and Stephen King, and Arthur C. Clarke and Ray Bradbury. I consumed fantastic fiction and loved how you could make possible whatever weird idea you had in your head. Your taking your eccentric ideas and trying to convince the reader that they're plausible.”

HOW REAL LIFE SOMETIMES REMINDS HIM OF ‘ZONE ONE’: “I have tried not to think about that book because things turn out pretty terribly. I was terrified those first couple of weeks (of the pandemic) and I felt the same thing after the hurricane (Sunday) a few years ago, when lower Manhattan was blacked out. It was like walking through ‘Zone One.' And now it's real and it's more scary than I thought."

HOW LIFE HAS CHANGED SINCE DESCRIBING HIMSELF AS INCAPABLE OF JOY IN THE 2014 NONFICTION BOOK ON POKER “THE NOBLE HUSTLE": “I was this depressed guy going through this midlife crisis and having this wonderful writing assignment (to write about the World Series of Poker) fall into my lap. It's really who I was in 2011, and in order to keep that inner voice, I had to impersonate who I had been two years before. When I look back through all my work .... I think who I was at the time is always determining how the book turns out.

"For ‘The Nickel Boys,’ I was someone trying to figure out where the country was going. It was during the first months of the Trump administration and in Elwood and Turner (the book's two main characters), I had Elwood being the optimist and Turner being the pessimist."

ON THE BLACK LIVES MATTER PROTESTS: "I grew up in New York and in the early ‘80s and every other day it seemed there was a case of police brutality and we’d have this conversation about how that has to change and nothing happened. My whole life has been me seeing these documented cases that result in zero change.

“But I've been surprised how far reaching and involved the protests have been. You're seeing people in white, tony towns in the South and the Midwest and you're seeing protesters in New York and on Fifth Avenue and in Union Square and at the Barclay Center. I've been delighted and surprised how people have seized the moment. It feels like we're moving somewhere in the country. I'm usually pessimistic about where things are going, but the protests have made me feel a little different.”