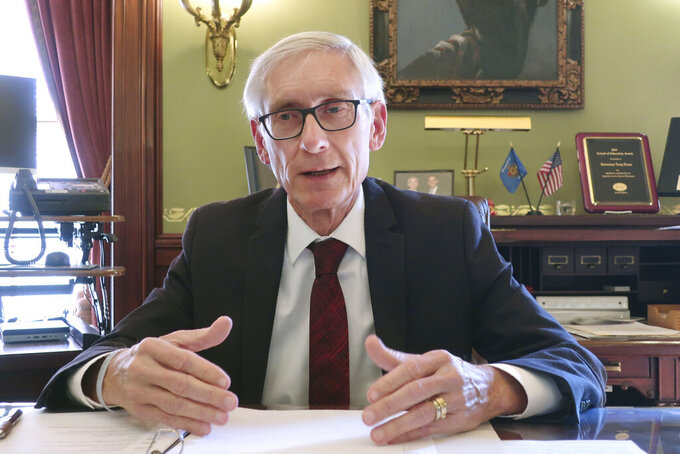 FILE - In this Dec. 4, 2019 file photo, Wisconsin Gov. Tony Evers speaks during an interview with The Associated Press in his Statehouse office in Madison, Wis. Evers' administration overstepped its authority when it unilaterally extended the governor's stay-at-home order through the end of May, the state Supreme Court ruled Wednesday, May 13, 2020. (AP Photo/Scott Bauer, File)

MADISON, Wis. (AP) — Democratic Gov. Tony Evers chided a Republican lawmaker Thursday who called for the resignation of the state's health secretary, saying it was an “insane statement.”

Sen. Tom Tiffany, who was elected to Congress in a special election on Tuesday, said Palm should step down as leader of the Wisconsin Department of Health Services because of how she handled the state's response to the coronavirus pandemic, which Tiffany referred to as the “Wuhan virus.”

The state Supreme Court on Wednesday ruled 4-3 that Palm exceeded her authority with an order that closed most nonessential businesses to slow the spread of the virus. Palm was appointed by Evers but has not been confirmed by the Republican-controlled state Senate. Two other Republican senators previously called for her confirmation to be rejected, just as the Senate did last year to Evers’ agriculture secretary.

Tiffany said Palm's approach led to the collapse of the state's economy and health care system and “devastated our way of life.”

“Ms. Palm came here as Governor Evers’ hired gun, and she will leave with Wisconsin’s corpse if she continues," Tiffany said in a statement.

Evers stopped a news conference on the virus to speak about Tiffany's statement about 20 minutes after he released it.

“Senator Tiffany please, you just won an election. Just relax,” Evers said. "This is an insane statement. We talk about trying to tone down the rhetoric and I've done everything I can do to that. To make a statement like that about someone who has dedicated her life to saving lives, please sir give us a break. You're headed to Washington, D.C. I know you're better than this.”