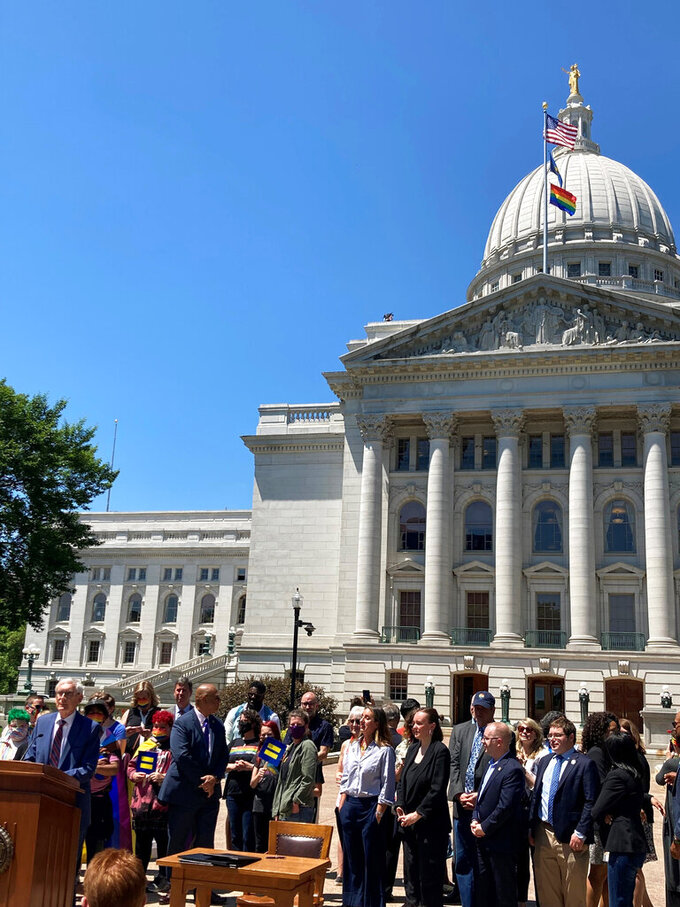 Wisconsin Gov. Tony Evers, at the podium, said he's not ruling out vetoing the entire state budget on Tuesday, June 1, 2021, in Madison, Wis. Evers spoke after a ceremony to raise the rainbow gay pride flag outside the state Capitol in recognition of gay pride month in June in Madison. (AP Photo Scott Bauer)

MADISON, Wis. (AP) — Democratic Gov. Tony Evers refused to rule out the possibility of vetoing the entire state budget that's currently being written by a Republican-controlled legislative committee, saying Tuesday that it was too early to say whether he would do that.

Evers was asked whether he was considering a veto after Republicans agreed to spend less than 10% of what he proposed on K-12 schools. Evers called that funding level an “insult to the kids of our state” and said a veto of the entire budget was “on the table.”

Evers also said “in some instances it is a reasonable request” for businesses, health care institutions and universities to require proof of vaccination for the COVID-19 virus.

One Republican-backed bill would prohibit the University of Wisconsin from requiring vaccinations, or COVID-19 tests. Other GOP proposals, all of which are up for a public hearing on Wednesday, would prohibit discrimination against people based on vaccination status and bar businesses or state government from requiring employees or customers to be vaccinated.

Evers has already vetoed a bill that would have prohibited health officials from mandating the vaccine.

On the budget, Evers said he hoped the Legislature would put more money toward K-12 schools.

The Legislature's Joint Finance Committee last week approved spending less than $150 million more on K-12 schools, which was less than 10% of what Evers requested. Republicans defended the move, noting that Wisconsin is set to receive $2.6 billion in federal coronavirus stimulus money for education.

However, the level of new funding does not meet federal match requirements, putting $1.5 billion of coronavirus relief funds in jeopardy. Republican co-chairs of the budget committee, Rep. Mark Born and Sen. Howard Marklein, said last week they were aware the funding level may not meet federal requirements.

Marklein declined to comment Tuesday, and Born did not immediately return a message.

Evers also defended allowing unemployed people to receive $300 more a week in benefits approved by Congress during the pandemic. He questioned arguments made by Republicans who want to end that and other federal unemployment benefits who say they are worsening the state's worker shortage problem.

Evers, along with U.S. Sen. Tammy Baldwin, said they hadn't seen data to back that up and employers had been short of workers long before the pandemic hit.

Evers commented after a ceremony outside the state Capitol where the rainbow flag symbolizing gay pride was raised for the third straight year. June is gay pride month and Evers was the first governor in Wisconsin history to order the pride flag to be flown when he did it in 2019.

Evers said that was a preventative measure and he wasn't aware of any state money being used currently on the practice.

Evers also strongly signaled that he would veto Republican-authored bills making their way through the Legislature that would prohibit transgender girls from playing for girls or women's teams from kindergarten through college.

“I will veto any bill that's going to negatively impact our kids, period,” Evers said. He said that “hateful and divisive rhetoric” on display in the Capitol has no place in Wisconsin.

He was joined outside for the flag raising ceremony by Baldwin, who is gay, along with several gay and lesbian members of the state Legislature, Lt. Gov. Mandela Barnes and several members of his Cabinet.