Ex-health director gets $155,000 in separation agreement 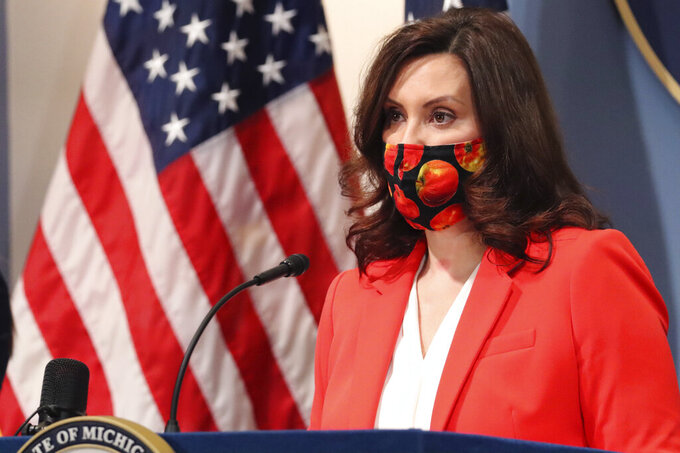 In a photo provided by the Michigan Office of the Governor, Gov. Gretchen Whitmer addresses the state during a speech in Lansing, Mich., Wednesday, Feb. 24, 2021. The governor said her administration will announce the further loosening of Michigan's coronavirus restrictions in coming days. She did not elaborate much in a Wednesday news conference, in which she again pressed the Republican-controlled Legislature to pass a multibillion-dollar COVID-19 relief funding plan. (Michigan Office of the Governor via AP)

The agreement calls for Gordon to drop all claims against the state, though it was not immediately clear what claims may have been included. It also promises legal assistance in matters relating to actions he took while director. Gordon resigned in January after signing a new employment agreement the previous October that included a $182,000 salary, according The Detroit News and the Free Press.

It was not revealed why he was leaving at the time of his resignation. However, he resigned shortly after the Michigan Supreme Court effectively invalidated many of Whitmer’s executive orders pertaining to the COVID-19 pandemic, and Gordon issued essentially the same mandates under state laws unaddressed by the court.

The director’s decision to step down during the pandemic prompted questions, but the governor repeatedly avoided giving direct answers when asked whether she requested he resign. However, the separation agreement says if asked, the state will say Gordon voluntarily resigned.

Gordon on Monday declined to comment on the agreement.

“Executive separation agreements that include confidentiality terms and release of claims are fairly standard practice,” said Whitmer spokesman Bobby Leddy in an email statement. ”Per the terms of the agreement, we can’t comment further on a personnel matter.”

Republican state Rep. Matt Hall of Marshall told The Detroit News he was “stunned” by the separation agreement. The lawmaker, who once chaired the House Oversight Committee, said he had grave concerns about the use of government funds to prevent taxpayers from knowing what was behind Gordon’s departure.

“The people of Michigan deserve to know what was going on here,” Hall said.

“Sometimes, we would give them a couple of weeks of vacation at the end, but most all of the ones I can remember always had time coming to them,” Muchmore said of departing officials. “I don’t know of any cash involved.”

Attorney Jason Shinn, who has practiced employment law for 20 years, said separation deals within the government are not unheard of among high-level officials. The fact that Gordon signed one isn’t necessarily in itself a “smoking gun” that a major falling-out had occurred with Whitmer, he said.

“There are benefits to both parties to having it in place,” said Shinn, who highlighted the protection against future legal claims.

Gordon has been recruited to serve as a public service scholar at the University of Michigan Law School, associate dean Gil Seinfeld told The Detroit News.