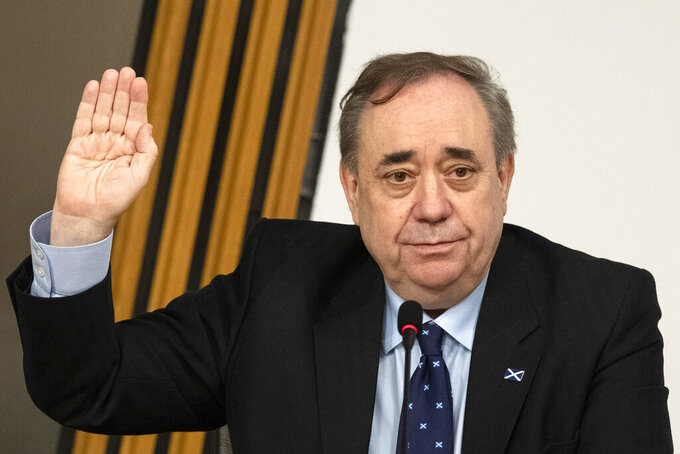 Former Scottish leader Alex Salmond is sworn in before giving evidence to a committee of the Scottish parliament at Holyrood in Edinburgh, Friday Feb. 26, 2021. Former Scottish leader Alex Salmond will lay out his belief that his successor tried to damage his reputation through an unfair probe of sexual harassment allegations when he appears before lawmakers Friday in a case that is tearing apart the country’s biggest political party. (Andy Buchanan/Pool via AP

LONDON (AP) — Former Scottish leader Alex Salmond on Friday criticized the government of his successor and one-time friend for undermining democratic principles and the rule of law, in the latest episode of a political tug of war that threatens to tear apart Scotland’s independence movement.

Salmond's comments came as he testified to a committee of the Scottish parliament investigating the government’s handling of sexual harassment allegations against him. Scotland’s highest civil court ruled in 2019 that the government had acted unlawfully, and awarded Salmond more than 500,000 pounds ($695,000) in legal expenses.

Salmond criticized his successor, First Minister Nicola Sturgeon, for allowing the distinctions between her government, the Scottish National Party and the civil service to become blurred, amid suggestions that she intentionally sought to destroy his reputation. The government and civil service have systematically tried to avoid public scrutiny by refusing to turn over evidence requested by parliament, he said.

“The move to independence, which I have sought all my political life and continue to seek, must be accompanied by institutions whose leadership is strong and robust and capable of protecting each and every citizen from arbitrary authority," Salmond told lawmakers. “Such a principle is a central component of the rule of law."

The long-awaited testimony was postponed earlier this week after the national prosecutors’ office expressed concerns about Salmond’s written evidence. The documents were removed from the parliament’s website and later republished with some sections redacted, paving the way for Salmond's appearance on Friday.

In 2019, Salmond was charged with sexual assault and attempted rape after allegations by nine women who had worked with him as first minister, or for the party. Salmond called the charges “deliberate fabrications for a political purpose,” and was acquitted after a trial in March 2020.

Sturgeon is scheduled to give testimony to the committee next week.

The two have traded accusations for months over who knew what and when about the allegations against Salmond.

Salmond accuses people within the SNP and Sturgeon's government of a “malicious and concerted effort” to sideline him and damage his reputation. He also says Sturgeon lied about her meetings with him and violated the code of conduct for government ministers. If that were found to be true, she could be forced to resign.

Salmond claimed there is “no doubt” Sturgeon broke the rules on ministerial conduct, but stopped short of saying she should resign.

The long-running case has been a “nightmare," Salmond said, adding that he would like to stop talking about the events in question, which have damaged his reputation and wounded him personally.

“The reason I’m here today is because we can’t turn that page, nor move on until the decision making undermining the system of government in Scotland is addressed," he said. “The competence and professionalism of the civil service matters. ... Democratic accountability through parliament matters. Suppressing evidence from parliamentary committees matters."

Sturgeon earlier this week accused her predecessor of making “wild claims” about a conspiracy.

Salmond, who led the SNP for two decades and was Scotland’s first minister between 2007 and 2014, built the separatist party into a major political force and took the country to the brink of independence by holding a referendum on the issue in 2014.

He stepped down as first minister after voters decided Scotland should remain part of the U.K. Sturgeon, his friend and deputy, replaced him.

The SNP has become increasingly divided between Salmond’s supporters, who want a new independence referendum come what may, and those who back Sturgeon’s more cautious approach.

Sturgeon and her allies are also critical of Salmond’s efforts to stay in the public eye, especially his talk show on the Kremlin-funded English-language television station RT.

Sturgeon’s popularity, meanwhile, has been boosted by her response to the coronavirus pandemic.

The feud threatens to derail a party that is riding high in the polls and increasingly confident it can secure its goal of taking Scotland out of the United Kingdom.

Scotland’s 2014 referendum was billed as a once-in-a-generation decision, but the SNP says Brexit has fundamentally changed the situation by dragging Scotland out of the European Union. A majority of Scottish voters opted to remain in the EU during the 2016 referendum, even though the U.K. as a whole voted to leave the bloc.

An election for the Scottish Parliament is due in May, and the SNP has a strong lead in opinion polls. Sturgeon says that if she wins a majority, she will push for a new independence referendum.