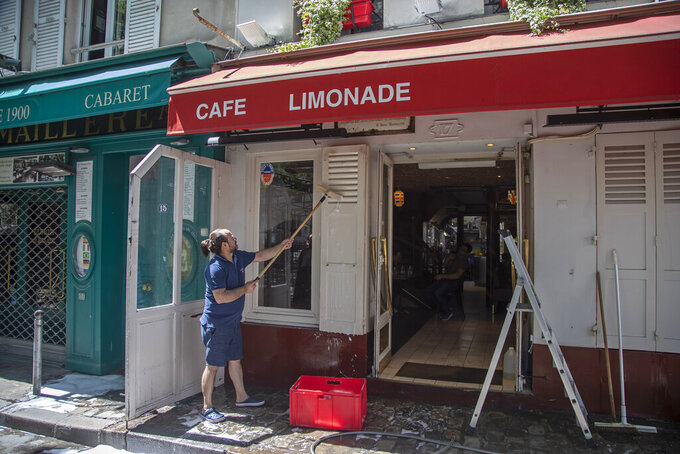 A man cleans the terrace of his restaurant in Paris, Friday, May 29, 2020, as France gradually lifts its Covid-19 lockdown. France is reopening next week its restaurants, bars and cafes starting next week as the country eases most restrictions amid the coronavirus crisis. (AP Photo/Michel Euler)

The top two soccer leagues in men's soccer and the top league in women's soccer ended early, as did the Top 14 rugby league, after Prime Minister Édouard Philippe said they could not resume because of the coronavirus pandemic.

Patrick Kanner, sports minister from 2014-17, thinks the leagues felt pressured following Philippe's televised address into calling their seasons off, and that play might have been able to go ahead in the right conditions.

“It was after his (Philippe's) announcement on April 28 before (parliament) that the leagues and the federations gave in,” Kanner told France Inter radio on Saturday. “They were not given any choice. I insist on this: there were health protocols being prepared by all the sports organizations. Maybe we could have resumed the competitions in June.”

France is the only one of Europe’s five major soccer leagues to cancel its season. Runaway leader Paris Saint-Germain was declared champion while Toulouse and Amiens were relegated.

Games in Germany have already resumed and they are set to do so in England, Italy and Spain next month — all without fans at the stadiums. The Premier League was given government approval on Saturday to press ahead with its June 17 restart.

Kanner regrets that French fans must turn their attentions elsewhere for entertainment.

“Quite honestly, I would prefer it that the French could watch Ligue 1 games on television rather than Bundesliga games,” Kanner said.