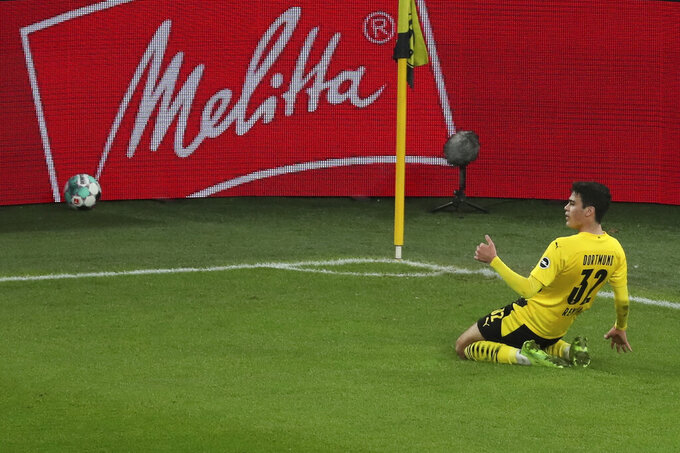 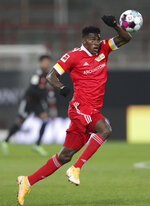 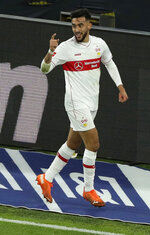 BERLIN (AP) — They weren’t allowed inside the stadium but Union Berlin fans let their team know they were outside as Union held Bundesliga leader Bayern Munich 1-1 on Saturday.

Union is flying high in sixth place, two points behind Borussia Dortmund, which slumped to a 5-1 loss at home to Stuttgart. The defeat extended Dortmund's winless run in the league to three games.

Union supporters welcomed their team bus with a pyrotechnic display before police arrived, then set off fireworks during and after the game. They sang outside the stadium throughout.

“It did us good to feel this support,” Union coach Urs Fischer said.

Grischa Prömel gave Union a fourth-minute lead before Robert Lewandowski equalized in the 67th to keep Bayern top of the league on goal difference from Leipzig.

Bayer Leverkusen has a chance to go first Sunday with a win over Hoffenheim.

Union fans were excluded from Bayern’s visit last season, too. The teams’ first meeting at Stadion An der Alten Försterei (Stadium at the Old Forester’s House) was called off when the coronavirus pandemic broke in March, then played in an empty stadium when the league resumed two months later.

Union, which was promoted last season, is yet to play Bayern with supporters present. No fans are allowed to attend any Bundesliga games as Germany grapples with a second wave of the virus.

But many turned up anyway to welcome their team for its biggest league game of the season.

“We’re trying to let the team know from outside (the stadium) that we’re still supporting them and giving them a bit of courage for the difficult game against Bayern,” Union fan Dirk Donath told The Associated Press before kickoff.

Robert Mailing, who was there with his dog to welcome the team, was going to watch the game at home, then return afterward again. In bitter cold, the dog was wearing a jacket signed last season by the Union team.

“There’s a new jacket for this season and that’ll be signed, too,” Mailing said.

Despite saying “it’s rubbish without fans,” Mailing was in favor of the restrictions, especially as he had a lung complaint.

“I know people who’ve got the darned virus and if I get it that’s probably it for me,” he said. “I hope it’s over soon.”

Union fan Eyk Grasnick noted that German Chancellor Angela Merkel had tears in her eyes as she appealed during the week for people to socially distance.

“Football is incidental this year, but it’s a nice incidental thing and that’s why I’m here, to savor the atmosphere a bit,” Grasnick said.

Union had a great start with Taiwo Awoniyi testing goalkeeper Manuel Neuer in a one-on-one within the first minute.

The home side keep pushing and Prömel scored with a header from a corner in the fourth minute. Fans outside the stadium could be heard celebrating some 15 seconds later. Union missed several chances to increase the lead.

Bayern improved in the second half though Awoniyi went close before Union goalkeeper Andreas Luthe denied Thomas Müller at the other end.

Bayern’s pressure eventually paid off when Kingsley Coman set up Lewandowski for the equalizer.

“A win might have been possible with a bit more efficiency, but this 1-1 is a deserved result,” Fischer said.

American Gio Reyna scored an impressive equalizer in the 39th minute for Dortmund, but it was the only highlight in a game to forget for Lucien Favre’s team.

“It was a catastrophe,” Favre said of Stuttgart’s first win over Dortmund in 14 years. “We were very, very bad.”

Silas Wamangituka put the visitors ahead with a penalty in the 27th, before the 18-year-old Reyna equalized when he took Raphaël Guerreiro’s ball over the top brilliantly with his first touch, then flicked it past goalkeeper Gregor Kobel with his next.

Stuttgart had twice as many shots on goal in the first half, however, and the promoted side made them count in the second. Wamangituka grabbed his second goal in the 53rd, Philipp Förster scored in the 60th and Wamangituka set up Tanguy Coulibaly in the 63rd.

Jadon Sancho missed a good chance for Dortmund before Reyna had a goal ruled out through VAR as substitute Youssoufa Moukoko was offside in the buildup.