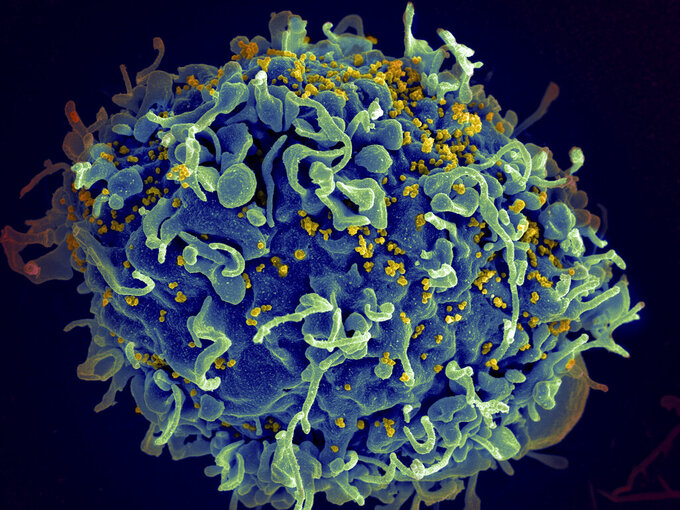 FILE - This electron microscope image made available by the U.S. National Institutes of Health shows a human T cell, in blue, under attack by HIV, in yellow, the virus that causes AIDS. The virus specifically targets T cells, which play a critical role in the body's immune response against invaders like bacteria and viruses. Colors were added by the source. Some researchers believe COVID-19 has derailed the fight against HIV, siphoning away health workers and other resources and setting back a U.S. campaign to decimate the AIDS epidemic by 2030. (Seth Pincus, Elizabeth Fischer, Austin Athman/National Institute of Allergy and Infectious Diseases/NIH via AP)

NEW YORK (AP) — Some researchers believe COVID-19 has derailed the fight against HIV, siphoning away health workers and other resources and setting back a U.S. campaign to decimate the AIDS epidemic by 2030.

Saturday marks the 40th anniversary of the first report that brought AIDS to the attention of the public. For a time, the battle against HIV — the virus that causes AIDS — was going well. But experts believe the U.S. could soon see its first increase in infections in years. Internationally, recent strides could also be undone because of COVID-19's interruption of HIV testing and care.

“COVID was a huge setback,” said Jeffrey Crowley, a former director of the White House Office of National AIDS Policy who is now at Georgetown University.

Before COVID-19, health officials were celebrating how new medicines and other developments had gradually tamed HIV, prompting then-President Donald Trump to announce in 2019 a campaign to "eliminate" the U.S. epidemic by 2030.

But now, U.S. health officials are gathering data on exactly how much COVID-19 affected HIV infections and deaths, including how well testing, prevention and treatment kept up in the pandemic.

There are signs of a backslide.

At the least, COVID-19 halted recent declines in new HIV infections, Jenness said. “At the worst, it potentially brought us an increase of cases for at least the next couple of years,” he added.

Limited data collected by the Centers for Disease Control and Prevention suggests there were large drop-offs in HIV testing and other services.

The CDC looked at data from a lab that handles about a quarter of the nation’s HIV tests, comparing the numbers from March 13 through September 30 last year with the same period the year before. The agency found there were 670,000 fewer HIV screening tests, and about 4,900 fewer HIV diagnoses than normal.

There also was a 21% national decline in prescriptions for pre-exposure prophylaxis, or PrEP. a kind of medicine people at risk for HIV take to prevent them from getting the virus through sex or injection drug use.

Most U.S. health departments and community organizations had to scale back HIV testing, the first step in putting people with the virus on medicine that can keep them from spreading it. Also, health department workers who did the contact tracing to stop HIV outbreaks were shifted to COVID-19.

Even where HIV clinics were open, some people did not want to come in because of fear of catching the coronavirus.

There may be another reason: less sex.

Surveys suggest that at least during the initial months of the pandemic, many adults at higher risk for HIV infection had sex on fewer occasions and with fewer sexual partners.

But there also are signs that many people resumed their normal levels of sexual activity by summer, said Jenness, whose research focused on gay and bisexual men — a group that for years has had the highest HIV infection rates.

“People's sexual behavior changed for only three months,” but prevention, testing and care disruptions are still going on, he said.

What does that mean for the national goals?

Data released this week showed the number of new infections declining for years, dropping to about 35,000 in 2019.

After Trump made his announcement in 2019, federal health officials clarified that the actual goal was a huge reduction in new infections over the next 10 years — down to fewer than 3,000 a year.

But Jenness and his fellow researchers predicted that the Atlanta area alone will see about 900 more HIV cases than normal over the next five years among gay and bisexual men.

Recent surges in HIV infections in West Virginia have been tied to intravenous drug use, part of an ongoing shift in how the virus is spreading there. In 2014, 1 in 8 West Virginia HIV cases was attributed to injected drugs. By 2019, nearly 2 out of 3 were, according to state health department data.

All of this suggests that the 90% reduction goal will not be met, several experts said, though health officials have not yet abandoned that objective.

"We’re still working towards that goal,” said Kevin Delaney, a CDC HIV/AIDS researcher. “If we are missing millions of HIV screening tests from 2020, there will need to be an investment made to make those up. But the targets have not been changed.”

Walensky, a noted HIV researcher before she became CDC director, said it will be difficult.

“Do I think it's doable? Absolutely,” she said. "Do I think we have the resources now to do it? I don't think so yet."

Worldwide, officials say there were about 38 million people with HIV/AIDS in 2019. An estimated 1.7 million people contracted HIV in 2019, a 23% decline in new HIV infections since 2010.

But COVID-19 interfered with testing and other health services globally, too. In Africa, one of the continents hardest hit by AIDS, experts noted interruptions in programs that check pregnant women for HIV and that provide male circumcision to reduce their risk of infection.

UNAIDS, the United Nations effort to stem HIV and AIDS, previously set goals to get certain proportions of infected people diagnosed and treated by 2020. This week, the organization said dozens of countries have hit the goals — “evidence that the targets were not just aspirational but achievable.” The agency has set even more ambitious goals for 2025.

But it will be difficult for the whole world to hit such targets, said Dr. Kevin De Cock, a Kenya-based global health expert.

“I'm not persuaded it's judicious to talk about the end of AIDS,” De Cock said. “Internationally, I think we've made tremendous progress. (But) we are not on track to meet the goals that organizations like UNAIDS have declared."